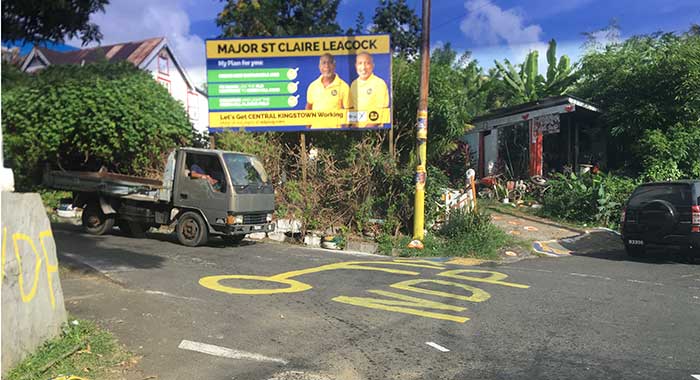 Electio markings on the road in Block 2000 on Wednesday. (iWN photo)

Both the Unity Labour Party (ULP) and the New Democratic Party (ULP) are asking their supporters to not paint election campaign slogans on public property, including roads and retaining walls.

“… from the Unity Labour Party perspective and position, we have indicated to all our candidates and to our supporters, that public property must not be defaced,” ULP General Secretary Julian Francis said on Friday.

He was speaking at the signing of the National Monitoring and Consultative Mechanism (NMCM) “Code of Ethical Political Conduct”, by which the parties have agreed to abide as they conduct their election campaigns.

“In other words, all this painting of the road and the back walls and side roads must not happen. It is specifically in the code and we are signing to that this morning,” Francis said.

“Regrettably, I have seen evidence in at least one constituency that I saw last night for myself where such painting has started.”

iWitness News has seen some “NDP” and “Jobs” painted on the road in an area of the main Windward Highway at Sion Hill.

“And I want to make sure that the supporters of the Unity Labour Party are being reminded this morning and let us not be, as we say locally, follow fashion,” Francis said.

He gave a commitment, on behalf of his party, to abide by the code.

And, speaking at the same ceremony, Friday said:

“I, too, on behalf of the Democratic Party, we discourage anyone, whether supporters of ours or just persons who like to paint that we do not encourage painting and defacing of public property. Both parties, both major parties agree to that and act in accordance with that, then I see that there is no problem from us in assuring that it will happen that way.”