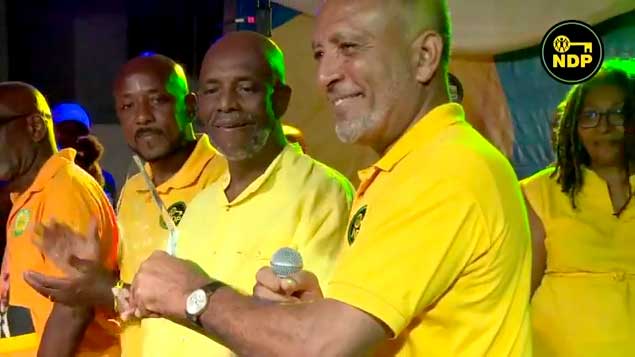 In this OCtober 20220 image, NDP President Godwin Friday, right, presents an award to former party leader, Arnhim Eustace, while Dwight Fitzgerald Bramble, who went on to retain the East Kingstown seat for the NDP, looks on. (Photo: Facebook Live)

The New Democratic Party (NDP), on Friday, presented former parliamentary representative for the area, Arnhim Eustace, with a lifetime award for his 28 years of service to them.

During that time, he served for five months as prime minister and then as opposition leader from April 2001 to November 2016.

“Tonight, we, the people of St. Vincent and the Grenadines come here to thank Arnhim Eustace for his visioning, for his guidance, for his love of country, and for taking the New Democratic Party from the doldrums right to the cusp of re-governing this country.

And I want tonight, to challenge every Vincentian to do this one for Uncle Arnhim,” he said in an apparent reference to the Nov. 5 general elections, in which the NDP is making its fourth attempt to return to office.

Cummings noted that he has repeatedly said that he would not have been involved in politics in St. Vincent and the Grenadines had it not been for Eustace.

“I don’t make that statement lightly. I know of the man, I know what he stands for. I know his ability. I know of his sacrifice, tremendous sacrifice to be given an established position at the Commonwealth that carries with it a level of perk that is unknown in St. Vincent and the Grenadines and to say no, the people of St. Vincent and the Grenadines mean more; that is Ulric Arnhim Eustace,” Cummings said, transposing the order of Eustace’s given names.

“This is a man who has stood up and on every occasion set aside party interest in the name of St. Vincent and the Grenadines.

“And so, my honour it is tonight, to ask Dr. Godwin Friday to come forward and to present a plaque, to my friend, my boss, my mentor, Arnhim Ulric Eustace. And it gives me particular honour to recognise, on stage, the lady who has been by his side through thick and thin, an equally competent lady who has contributed substantially to our country,” he said, referring to Eustace’s wife, Jennifer.

And, NDP president, Godwin Friday in presenting the plaque to Eustace, said:

“Arnhim, all that has been said still cannot capture the contribution that you have made to this country, to this New Democratic Party and the inspiration you have been to us over so many years.

“There comes a time in everyone’s life when we must make a choice as to what is important. You made that choice so long ago that representing your country, serving your people was the most important thing you could do with your productive life and we are grateful for that and we honour you for doing that and we are inspired by your example.

“And this plaque, it says, ‘A lifetime achievement award to the Honourable Arnhim Eustace.’ Arnhim, well done, and thank you.”

Eustace, who is said to be battling some health challenges, did not speak at the event.