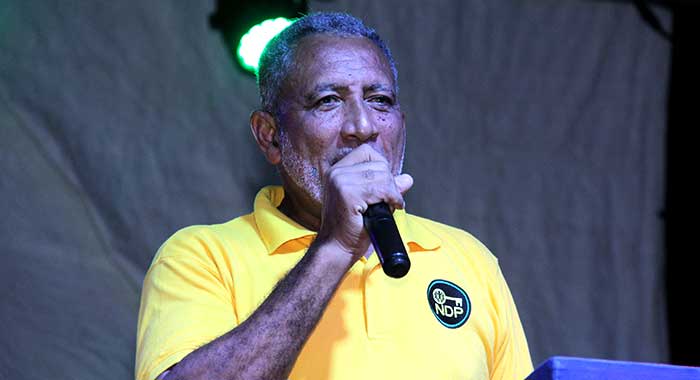 Leader of the Opposition Godwin Friday says that a New Democratic Party (NDP) administration is “not going to jeopardise” the scholarships of any Vincentian studying abroad, including in Taiwan.

The NDP leader’s comment at Redemption Sharpes, Friday night, is the clearest indication that the NDP is either backing away from the One China policy or is prepared to give Taiwan an ear before acting on it, if voted into office on Nov. 5.

Friday told party supporters in Redemption Sharpes that people had been calling him, asking whether it is true that an NDP administration would cut all scholarships.

He said he was also asked that question while campaigning in Clare Valley, a South Leeward village.

“So I say, ‘I must be a real idiot …to even think of doing that’,” the opposition leader said.

“I give you that absolute commitment. I know the value of education. Fitz Bramble, this young man here was educated on a [football] scholarship,” he said, referring to the former national footballer and NDP East Kingstown candidate.

“This fella here had a scholarship for football,” he further said, referring to Renson Haynes, a former national footballer

“I have no intention of jeopardising the future of any young person who is studying abroad. That is an absolute commitment,” Friday told party supporters and media audiences.

“If anything, we will expand the range of scholarships that we can offer to our people because we want them to get ahead. It is important to the development of the country. So, we’re debunking all the lies.  When they can’t deal with the message, they try to deal with the messenger,” Friday said.

“When they can’t deal with the messenger because nobody paying them any mind. They can say whatever they want about me. My back is broad. I go take it for the people of this country. But, don’t try to twist what we are saying to make us look like we are demons or that we don’t know what we are doing.”

In August 2016, then NDP leader Arnhim Eustace made a surprise announcement that if voted into office, the NDP would switch diplomatic recognition from Taiwan to China.

Friday, who took over the NDP’s leadership in November 2017, maintained that that was the party policy, but over the last year or more, it appears that the party has been reconsidering that policy.

Although no formal announcements have been made, Friday has been the only NDP candidate commenting on the matter.

IWitness News understands that persons familiar with the issues have argued that the Ralph Gonsalves Unity Labour Party (ULP) had not taken advantage of the NDP’s announcement in its negotiations with Taiwan, even as Taiwan has lost a number of allies over the past few years.

Sources say, that the NDP has received data, for instance, which that show that, taken at its highest, the amount that Taiwan has spent on scholarships for Vincentian students over the 16 years of the programme was a maximum average of just over EC$2 million a year, with the real number believed to be significantly lower.

The data further shows that, for instance, the number of scholarships that Taiwan had granted in 2016, the year the NDP made the announcement, was 16 and the number increased to 19 in 2019.

iWitness News was told that an NDP administration could be prepared to maintain ties with Taiwan if Taipei increases the numbers scholarships its gives to Vincentian students annually and further invest in human development projects across the country.

Meanwhile, persons critical of SVG-China ties have argued about the “China debt trap” but have remained quiet on what is likely to happen if Kingstown defaults on the loans that it has received from Taiwan, for instance the US$50 million in December 2018, for the construction of two hotels.

At Friday’s meeting, the opposition leader also announced that an NDP administration would increase to EC$650 the minimum monthly stipend it gives to YES Programme workers.

The suggestion here, political observers say, is that the NDP would also ask Taiwan to increase its financial contribution to this programme.

The ULP administration introduced the YES programme in 2001, paying participants a stipend of EC$400 a month.

The ULP introduced the Youth Empowerment Service (YES Programme) in 2001 and Minister of National Mobilisation, Frederick Stephenson said in September that since then, every year, over 500 persons enrol in the programme and receive stipends of between EC$500 and EC$850 a month, for one year.