ULP manifesto ‘has come from the bowels of the people’ — PM 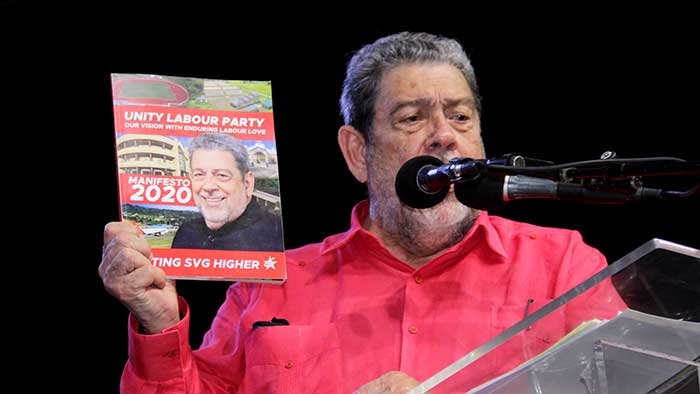 Prime Minister Ralph Gonsalves holds up a copy of the ULP’s manifesto at the launch on Sunday. (iWN photo)

The ruling Unity Labour Party (ULP), on Sunday, launched its manifesto for the Nov. 5 general election, with prime minister Ralph Gonsalves saying it is a document “which has come from the bowels of the people of this country from our experiences and from own creative minds and written by our own hands”.

Addressing a rally in Kingstown, Gonsalves contrasted the 100-page document — which he had said he completed while in quarantine after returning from the United States last month — with that which the main opposition New Democratic Party (NDP) launched one day earlier.

As [Minister of Finance] Camillo [Gonsalves] pointed out to you this evening, the manifesto of the NDP was clearly written by foreigners,” said Gonsalves, who is seeking a fifth consecutive five-year term for the ULP and as prime minister.

“You read it, the language, parts of it, is not the phrasing of the NDP and he made several errors,” he said, adding that the reference to a non-existent constituency, “Central Windward” was “obviously is not just a typographical error”.

Gonsalves, who has been an MP since 1994 and is the country’s longest serving prime minister, invoked his experience, telling party supporters, “I am speaking to you from the vantage point of someone who has laboured in this political vineyard longer and more productively than anybody else.”

He contrasted the ULP and the NDP saying, “…the ULP option of lifting SVG higher promises the acceleration of social and material upliftment and a further bolstering, strengthening of our sovereignty and independence in our own interests.

“I want you to listen carefully to every single word that I say here to you tonight because this election is joke business,” he said at the rally, which, like the NDP’s included artistes singing campaign songs.

“It depends on which option you pursue, whether you uplift the soul, the spirit, the social and material wellbeing of our nation, our independence and our sovereignty, in our own interest as a free people or you follow the NDP option of putting the country up for sale and our sacraments of nationhood, our passports and citizenship.”

The ULP continues to gnaw at the NDP’s proposal of introducing a citizenship by investment (CBI) programme in SVG, slamming it as the selling of passports.

“…Rather than they have on the cover ‘Putting SVG to work’, they should have on it putting SVG up for sale.

“What they have done is to put a for sale sign in the shop window of our nation and say to the foreigners, ‘Come on buy. Come and buy our passport, come and buy our citizenship.’”

And while the prime minister gave no indication of how the ULP’s campaign is being financed, he said that the NDP’s is being financed “by those who want to sell our passport and our citizenship”.

He, however, said he has opposed CBI since the NDP introduced it 22 years ago – a law that the ULP repealed after coming to office in March 2001.

Of the NDP, the prime minister further said:

“Their manifesto of 36 pages is nothing more than an invitation to sell St. Vincent and the Grenadines and its sacraments to the highest bidder. And they have this ‘for sale’ sign and they dress it up as if it is serious policy.

The NDP’s manifesto is actually a 76-page document.

He said that the ULP’s is a “manifesto of substance”, while the NDP’s is “a mirage”

“Then you have the ULP option of sustainable development and transforming our society and the economy and building a modern competitive, many-sided post-colonial economy, which is at once national, regional and global, in our own interest. That is about hard and smart work.

“And this manifesto is full with proposals. I will tell you this: it is a manifesto of substance; that of the NDP is a manifesto of a mirage. … Because nothing sustainable comes from selling your passports, selling your citizenship, because that opens the way to foreigners ruling you in your own country, you will become second class citizens and virtual slaves in the land of your birth. Labour will never, never allow that to happen,” Gonsalves said.

“…and you will see everything that you want from a government, what we have been doing and what we are going to ramp up further in doing is in this manifesto…”