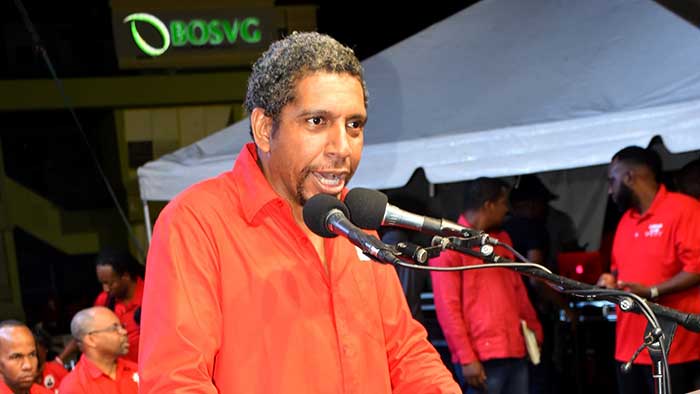 Minister of Finance Camillo Gonsalves says that a Unity Labour Party (ULP) administration will create at least 4,650 jobs if voted back into office for a fifth consecutive term.

Gonsalves told the launch of his party’s election manifesto in Kingstown that 3,000 jobs will be created in the hotel and hospitality sector.

Gonsalves, who is seeking re-election as MP for East St. George said that Clear Harbour, a local call centre, will increase its staff from 200 to 750.

The minister further said jobs will be created in the medicinal ganja space, “for all of the skilled men and women who know how to plant ganja and reap ganja”.

He said that when Rain Forest Seafood opens in Calliaqua they will hire 100 persons and hundreds more fisher folk will be selling fish to them.

“And we know that with PRYME will create jobs in this country for Vincentians,” Gonsalves said, adding that the government will get rid of PRYME, saying it is reckless to give people money to start businesses and they must go by a bank and borrow.

“Imagine you mustn’t get money for free to start a business. But they must sell passport for nothing. Imagine that. Think about it,” he said, referring to the opposition’s proposed citizenship by investment programme.

Gonsalves made a mockery of the manifesto that the main opposition New Democratic Party launched on Saturday in Petit Bordel.

“Every morning they wake up, they mek ah idea, they throw it in the manifesto. Every day they read something on Facebook, they say that is a good idea, leh we throw that in there too.  But they are not ready for serious business of governance in St. Vincent and the Grenadines. If you want serious governance in the country look to this man here, the five star general, and salute the five star general for the work he has done,” the finance minister said, referring to Prime Minister Ralph Gonsalves.

“I look to see what they saying about jobs because you look all round on the billboards you seeing ‘Jobs. Jobs. Jobs.’ ‘Jobs. Jobs. Jobs’ but ain’t telling you where the job them coming from,” he further said of the NDP manifesto.

Gonsalves spoke with continued disdain for the opposition’s proposed citizenship by investment (CBI) programme, which the government has dubbed the selling of passports.

“We don’t believe in no pie in the sky. We believe that this crowd of people represents intelligent Vincentians — people with a brain and an education who know hard work and are willing to strive and get better. And we know that because of that we will all lift Vincent and the Grenadines higher.”

He said that in the NDP manifesto there is nothing about medicinal cannabis.

The NDP is proposing to legalise the possession of two ounces of marijuana and the cultivation of five plants.

“… but they wah share way the thing for free,” he said of the NDP’s position on marijuana. Because if everybody ha’ five plants in their backyard, who go buy the ganja? … Who yo go sell it to… They ain’t thinking,” Gonsalves said.

“We cannot know, as the five star general leads us into battle one more time, do anything but say thank you Ralph Gonsalves for the work and the sacrifice that you have made for St. Vincent and the Grenadines. And we cannot send Ralph Gonsalves into this last election with no one-seat majority. We cannot send him back with eight-seven again,” the finance minister said of the prime minister, who is also his father.