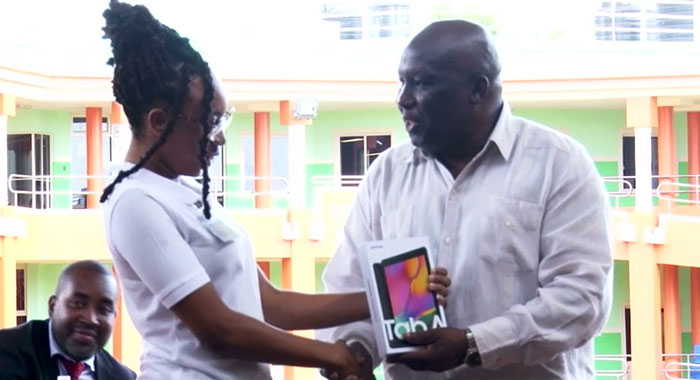 Nyla Samuel of the Division of Arts, Sciences and General Studies receives her table from Minister of Education, St. Clair “Jimmy” Prince.

Students of the St. Vincent and the Grenadines Community College (SVGCC) Divisions of Arts, Sciences and General Studies, and Teacher Education were among the first to receive their free Samsung tablets from the government on Thursday.

Permanent Secretary in the Ministry of Education Myccle Burke explained to the students that the devices will connect them to the world outside and that the smart devices are only as smart as the purposes for which they are utilised and urged the students to use them wisely.

Minister of Finance Camillo Gonsalves described the tablet distribution as a wonderful day in the history of education in St. Vincent and the Grenadines, especially, in light of the COVID-19 pandemic

Gonsalves told the students that the surest way out of poverty is through education.  He said the aim of the tablet distribution is to bridge the gap between those students who have access to technology versus those who do not, adding that the pandemic revealed the digital divide among students.

Following a delay in the arrival of the tablets, which Gonsalves acknowledged, 14,000 of the devices arrived on Wednesday, via Amerijet to be supplemented by 3,000 already on the ground.

Gonsalves said Grade 6 students and teachers will receive tablets as well and it is the government’s ultimate aim to distribute a tablet to every student and teacher.

He expressed gratitude to Digicel for assisting the government in procuring and shipping the Samsung tablets from China over a short period of time.  Later on, a different brand – “a sturdier type” — will arrive for lower primary school students, Gonsalves said.

He urged the students to use the tablets as tools for their education, to respect the devices, and taxpayers’ money.

Meanwhile, Prince told the SVGCC students that the tablets are just one aspect of the Education Revolution.

He thanked Gonsalves for his “push” and support in getting the tablets to the students.

The education minister further referred to a recent project through which over 200 homeowners received electricity, and that both initiatives are twinned to benefit students.

“I’m excited to have the tablets to distribute to you today,” Prince told the student body.

The project costs just over EC$12 million and 2,257 tablets will be distributed to all branches of the SVGCC, of which, 1,206 were allocated to SVGCC Villa Campus.

Prince  highlighted challenges during the hosting of online classes in the earlier months of the COVID-19 pandemic and urged incoming Division of Teacher Education students to “take it upon themselves to ensure when they go into the classrooms… they’ll begin to ensure that there is no phobia of the technology in schools”.

Tomorrow, Friday, the Divisions of Technical and Vocational and Nursing Education will receive their tablets.

On Monday, students met the required criteria in their CSEC and CAPE examinations will receive monetary awards, Prince said, and congratulated the 1,047 students qualified to receive the EC$500.

“At a date to be announced, we’ll also be paying out a total of US$120,000 to about 550 students who have been recommended by their schools for the annual Taiwan scholarships and I’m sure there are some of you here who’ll be receiving those scholarships also,” Prince said.

Also, over 50 national scholarships will be distributed to students who have done well at the CAPE and associate degree, among other examinations offered at the SVGCC, the minister of education stated.

He also announced that the Ministry will soon commence construction on several schools.

“We will be breaking ground soon to house the Sandy Bay Secondary School [and] a new building to house the Mary Hutchinson School in Union Island.

“We are doing work because we are concerned about you and your future, and the development of St. Vincent and the Grenadines,” Prince said.

Nyla Samuel, student of the SVGCC Division of Arts, Sciences and General Studies, moved a vote of thanks, saying that the tablets were greatly appreciated and that they, in turn, will show their gratitude by doing well.

The rest of the student body collected their tablets after the ceremony.

The handover ceremony took place at the SVGCC Villa Campus.  Other persons in attendance were: Parliamentary Secretary in the Ministry of Education, Deborah Charles; Chief Education Officer, Elizabeth Walker; and Director of the SVGCC Nigel Scott.