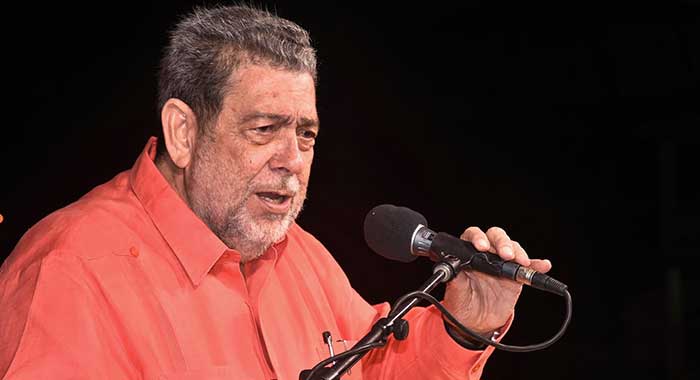 The yet-to-be-published 2018 poverty assessment — data from which has been leaked to the opposition — is “incomplete”, Prime Minister Ralph Gonsalves said on Friday.

He told Community College students that no one had sent him the document that was leaked to the opposition, even as he did not comment on whether they reflected the reality of poverty in the country.

The data show that in 2008, a household had to generate income of at least EC$204 per adult per month to live above the indigence line, while the figure had risen by EC$58 per month in 2018, reaching EC$262.

The report should have been published since March 2019, and in December of that year, Minister of Finance, Camillo Gonsalves, told Parliament that the report would be ready in three months.

The prime minister’s comments on Friday came as he responded to a question submitted by a student during a Community College event where Gonsalves, in his capacity as leader of the ruling Unity Labour Party (ULP) and Godwin Friday, as president of the main opposition New Democratic Party were invited to address and field questions from students, in separate sessions, ahead of next Thursday’s general elections.

“Your administration has been focusing on reducing poverty in St. Vincent and the Grenadines. Can you briefly comment on the current figures of the 2018 assessment that are currently being circulated.”

“The poverty study which is being done is incomplete,” Gonsalves said, adding, “I come prepared for that too

He then picked up a document, as some of the students applauded.

“I am a scientific person. Leh me first of all say, the document which I understand the Opposition Leader and Mr. [Daniel] Cummings, [incumbent MP for West Kingstown] quoted from and they say Ralph holding it back, nobody has every sent that document to me.

“So I will have to question the motives of somebody in the state administration where there is an incomplete process going on and they send it to the opposition.

“That alone should tell you about their mala fides,” Gonsalves said, using a Latin expression meaning “bad faith”.

“I don’t who know do it and I ain’t pointing finger and I ain’t looking for who do it either. That doesn’t concern me.

Friday and Cummings held a press conference on Wednesday, where they released the data to the media.

Cummings said the opposition had received the document “by an angelic intervention”, a statement that echoed “white angels”, the source to which Gonsalves, while in opposition, attributed documents leaked to him.

On Friday, Gonsalves told the college event that the Director of Planning had written to him, saying, “The data are yet to be evaluated against multi-dimensional levels of poverty, procedures which are deemed necessary for the finalisation of the estimates.”

He did not indicate the date of the communiqué, but commented, “And they gave a progress report since this thing — send it to me.

“‘Data quality and completeness are heavily dependent on respondents’,” Gonsalves said, continuing to quote the director of planning.

“You ask them a question and they give the reason why. You have to cross check those answers,” he told the moderator.

He further quoted the Director of Planning as saying,

“Furthermore, based on recommendation of the Caribbean Development Bank, the statistical office in 2018 utilises a recall method of documented response pending. This means that the survey respondents were asked to recollect what they had spent on an exhaustive list of food and non-items. It is likely that some respondents unintentionally did not give a full account of their spending.”

“Because they have to give historical information. You have to cross check that information and there are a series of technical issues, there are definitional issues, so you can’t compare what the previous two poverty assessment reports, which were done on the same basis, this one was done on an entirely different methodological and definitional basis.”

The prime minister further quoted the document as saying, “It is for this reason that the preliminary data are not available for public consumption since the process of investigating and interrogation of the data is incomplete.”

“Those things are not yet done. These are questions, which they go and ask people and they get some responses.

In December 2019, the finance minister told Parliament the institutional component of macro socio-economic assessment was complete.

The macro socio-economic assessment provides an understanding of the institutions and services that are critical to improving living conditions and reducing vulnerability to poverty and provides information on how the global economy has influenced poverty in SVG, the finance minister had said, adding that the draft report was being prepared.

The data collection and the work to strengthen the other component, namely the macro socio-economic assessment was being prepared, the finance minister had said.

On Friday, the prime minister said:

“… You have people when the earlier poverty study was done, not going to school. You have more people on pension now than before. You have more people getting family supports. Now, you walk ‘bout St. Vincent and Grenadines, you say St. Vincent poorer than 2001? I don’t know if you remember 2001, but let me say this, because these canards, otherwise known as misrepresentations and downright lies, must be corrected.”

He said that the opposition had noted that Colonarie — his home village – was the only census division in which poverty had fallen in the 10-year period, registering a drop of 28%.

Before the dissolution of the last Parliament, the opposition had made several attempts to get the government to release the poverty data.

In addition, the Caribbean Development Bank, through the OECS commission committed to providing technical assistance and guidance throughout the process.