PM says Leacock could come to ULP — with candle, song 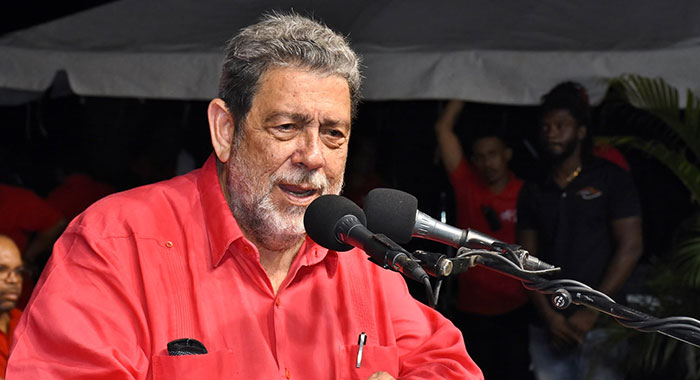 Incumbent MP for Central Kingstown, St. Clair Leacock has a song to learn if he retains his seat but his New Democratic Party (NDP) is returned to opposition in Thursday’s general election, says Prime Minister Ralph Gonsalves.

“… St. Clair, I want you to hear me. Ah read yo’ telling some lies on me. Ah ain’t go go through them tonight and they’re not important, they are inconsequential.

“What I will do is this: since yo’ telling so many lies about me, and you said in Parliament and you said at press conferences and at public meeting that at 70 years old you ain’t going back in no opposition, well, the ULP winning the government.”

Gonsalves asked Leacock if he would, therefore, resign and trigger a by-election or ask to join the ULP administration.

“But, because of the lies yo telling, if you — yo have to go in purgatory. And ah wah yo’ to hear this. And ah know what ah going tell you going annoy you. But I want to give you a chorus, a sankey, which you have to learn after yo’ come out a purgatory and you have to sing the sankey and have a candle in yo’ hand.

“St. Clair, yo’ think yo’ could manage tha’ one dey?” Gonsalves said.

2 replies on “PM says Leacock could come to ULP — with candle, song”