What Aristotle teaches us about the ULPs victory 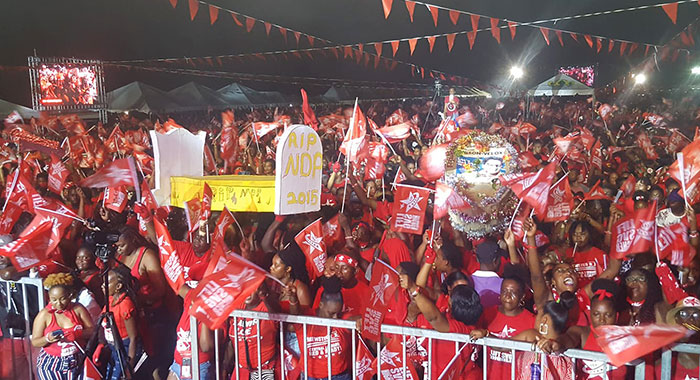 A scene from the ULP’s celebration rally. (iWN photo)

Following the Nov. 5 general elections, Vincentians reflect on a most riveting and nail-biting culmination of the elections results and season. Whether we choose to accept or disapprove of the outcome, one common consensus reigns supreme, the party with the most persuasive communication strategy (whether you call it “mind bending” or “fear mongering”) was victorious.

This basic application goes above and beyond each party’s ability to “fool off” the electorate, bringing to bare an invaluable truth: once a campaign is effective in connecting with its target audience, through persuasion, paying careful consideration to its target’s needs (even if it means playing on their fears, actual or imaginary) and giving them the sense that they are advocating for their rights while at the same time being respectful to their opponent (if not their opposing views). Such a party gains a competitive edge.

The ancient Greek philosopher Aristotle, often regarded as one of the world’s most influential thinkers, in his body of work “The Art of Rhetoric” is useful for this purpose. Was he alive in our local political sphere, he would have recognised the many persuasion tactics employed by both sides to earn votes. Aristotle’s triptych, which comprises of three modes, speaks of ethos (the person/character), pathos (use of emotion) and logos (appeal to reason), paints a vivid picture of contemporary political leadership, stressing the powerful influence of communication with respect to the relationship between the speaker and their target audience.

Ethos speaks to the credibility of each candidate. One would recall the frequent touting of triumphs, as the incumbent amidst a global pandemic was able to use sound judgment in its handling of COVID-19. The opposition, on the other hand, often villainised their efforts, making use of a similar strategy which often preyed on the vulnerabilities of the Ministry of Health, which the electorate could agree was a well-placed critique. Both sides often presented themselves as the capable hands needed to push SVG beyond its limitations onto the world stage. As for the incumbent leader, his unparalleled rap-sheet, consisting of his knowledge and experience made him a formidable opponent — “The political World Boss.” Aristotle thought that if the speaker’s actions didn’t match their words, they would eventually lose credibility. This only served to weaken their arguments. In the end, Vincentians decided, that what was good for the United Nations Security Council, and CARICOM, had to be good for their country. Any story or negative threat to each party’s campaign was immediately rejected and assertively challenged. Vincentians supported the best ethos.

The mode “logos” employs the use of reason to persuade the listener to agree to the speaker’s perspective. The adept politician would present such information in a way that would harm their opponent’s prospects of a rebuttal. Using statistics and expert suggestions, politicians aim to convey each other’s ideas as mere whimsical musings, absent of substance. This mode was perfectly outlined, following the suggestion of a certain parliamentarian, encouraging the citizenry to plant a number of marijuana trees if the opposition party won. This suggestion was immediately met with scorn, as the incumbent quickly discredited the message and the messenger.

The economy is often a frequent topic of debate, as both campaigns outline their plans for the future. Politicians aim to get their target audience to care about these plans and would often make a logical appeal to reason. The more their supporters care, the more leverage the party gains. With this strategy, Aristotle recommends that speakers would use vivid language that would resonate with their target audience. This causes them to become emotionally invested in what politicians have to say.

Tapping into the people’s emotions and feeling “Pathos”, is the final and most powerful mode of persuasion. This is where politicians paint their best portraits. Once they can get the people to feel something, the easier it is for them to do something. This in my humble view is where the opposition made their mark, presenting themselves to Vincentians as the hope for a brighter future, full prosperity and void of unemployment. Their utopic scenes of a St. Vincent powered by good governance and foreign investments were enough to swing the majority votes. The incumbent would not have any of this, and would devalue these plans using trigger words as Chinese colonialism, second class citizen and selling passports. They engendered a well-placed sense of fear in the package offered by the opposition, especially in the hearts of the working class, who for fear of losing their livelihoods to these new policies would rally behind the incumbent to “Lift SVG Higher”. Aristotle believed that the best way to transfer emotions interpersonally was through the rhetorical device of storytelling. More than 2,000 years later, this still holds true.

These ancient ideas can still be used to solve modern problems. Looking toward the future of ‘Vincy’ politics, future leaders are reminded that persuasiveness is also a learned trait. Combining these three modes serve to empower our leaders, because at the end of it all, to attain political success you have to present yourself and your message convincingly. Aristotle championed the idea that a leader’s ability to speak well and use rhetorical devices to change the perspectives of others has the ability to maximise the leader’s full potential. Aristotle’s ideas worked well then and they still do today and whosoever applies these the best will win.

*Eddy Smith, MA, is a policeman… and behaviour and communication specialist.

6 replies on “What Aristotle teaches us about the ULPs victory”