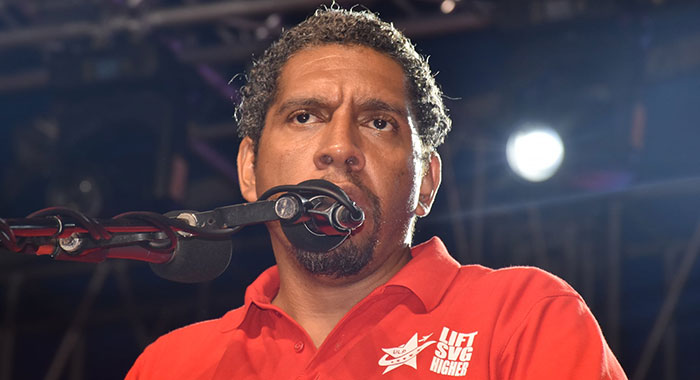 One day after the electorate reduced his 607-vote margin of victory in 2015 to 197 in the 2020 poll, MP for East St. George Camillo Gonsalves promised that his Unity Labour Party parliamentarians will be better representatives.

“Today, I can predict the future and tell you this: you have made us better representatives with your verdict yesterday,” he said one day after voters returned the ULP to an historic fifth term in office.

“We have to be thankful…” said Gonsalves, who was re-elected to a second five-year term having faced off with the New Democratic Party’s (NDP) Laverne Gibson-Velox.

The electoral performance by Gibson-Velox, a retired banker and first-time candidate came after she campaigned for four months, including two weeks in which a bout of dengue kept her confined to home amidst the worst outbreak the nation has seen since 2010 and which claimed five lives.

“’We nuh rise and boast/Yeah we give thanks like we need it the most’,” Gonsalves said, adding, “We don’t boast. We nah boastful. We give thanks for what has happened. Thanks for the blessings.  And gratitude, gratitude is a must.”

When the younger Gonsalves ran in 2015, he brought about the fourth consecutive defeat for the NDP’s Linton Lewis in the constituency of East St. George, and garnered the most votes nationally – 3,135, eclipsing his father’s 3,015.

And while the ULP won nine seats to the NDP’s six, increasing their margin of victory by an additional seat, for the first time since 1998, more persons voted for the NDP than for the ULP.

“You have made us better representatives of your interest, people of St Vincent and the Grenadines, and I want to thank you for all that you have done,” Gonsalves said.

“But your work is not done. A democracy is not a once every five years thing, where you vote and go home and wait five years to vote again.

He said that the ULP and NDP agreed on a lot of things, including the need for better schools, better jobs, better housing, better lives, and better opportunities for Vincentians.

“We mostly disagree on how we get there and you have made your verdict that the way of the ULP is the way that we must go forward to lift St. Vincent and the Grenadines higher,” he said, echoing the party’s campaign slogan.

But while the ULP won the majority of seats, even adding an additional seat to its margin for the first time since 1998, more persons voted for the NDP than for the ULP.

Gonsalves thanked voters for returning the ULP to office for a fifth consecutive term – the first time this has happened anywhere in the Caribbean during the post-independence era.

“It’s not an easy thing to do,” he said, noting the historical significance of the victory.

“… and I want to thank you and thank the five-star general for making history,” he said, referring to one of the monikers his father adopted during the election campaign.

He said that some persons did not vote, adding that persons at the rally did “for progress and prosperity and the Unity Labour Party”.

Gonsalves said that the nation or its democracy does not work if people don’t vote.

“So I want to thank each and every one of you for standing up in the long lines and voting for the Unity Labour Party, even those of you who didn’t vote for ULP. Voting in and of itself is an important thing to do and I express gratitude and I am grateful to my family for supporting us. These campaigns are not easy. They are long and they are arduous and all of us have to work very hard.”

Gonsalves thanked his campaign team in East St. George, praising it as the best team in the country.