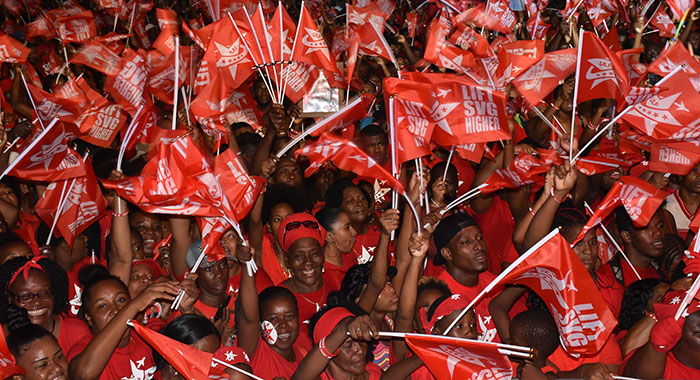 Political leader of the ruling Unity Labour Party (ULP), Prime Minister Ralph Gonsalves says as many as 4,000 persons who support the party did not vote in last Thursday’s general elections.

“I want to say that from my cursory look at the numbers and upon which I have also been advised by these who have had a preliminary — in excess of 3,000, maybe 4,000 persons who normally would vote the Labour Party, the ULP, stayed away from the polls,” Gonsalves said Saturday at Government House, in Kingstown, where he took the oath as prime minister.

“But they chose not to go and support the NDP and to support its particular strategic narrative,” he further said.

The ULP was returned to office for an historic fifth consecutive term winning 9-6 over the main opposition New Democratic Party, but lost the popular vote for the first time since 1998.

Supervisor of Elections, Dora James told iWitness News on Tuesday that she did not know when the final figures from the polls would be available.

However, the preliminary numbers show that the NDP garnered 32,829 votes compared to 32,529 for the ULP.

He said that party supporters who boycotted the polls had concerns “about some matters in their communities and connected with them personally.

“And we have to address those concerns because the electorate has spoken in that regard and that is a lesson that I take away from these results and, accordingly, whilst perusing the large strategic issues, we will intensify the work which we have been doing on the community-type issues touching and concerning lives and livelihoods, which reach people not at the second remove but directly,” the prime minister said.

He said he was not upset with party supporters who stayed away from the polls.

“Now, I want to say that those members of the Labour family who stayed home, I understand what you say and I continue to love you as I love every Vincentian dearly and I ask other members of the Labour family not to be annoyed or angry with them but to reach out to them and let us keep this amazing organisation together,” said Gonsalves, who last year told party supporters that anyone who leaves the ULP family is “dead — politically”.

Gonsalves said that the ULP is an “amazing organisation” that has been “the natural party of governance in this country since internal self-governance in 1979.

“There was a period when that was broken but the natural state of affairs has returned and that is why we have a fifth consecutive term. These are undisputable facts.”

The prime minister assured Governor General Dame Susan Dougan that “the verdict which the people have delivered, that I take it with no sense of triumphalism.

“I take it with solemnity and with great humility and with love and understanding for this country which is so special in our Caribbean civilisation,” he said.