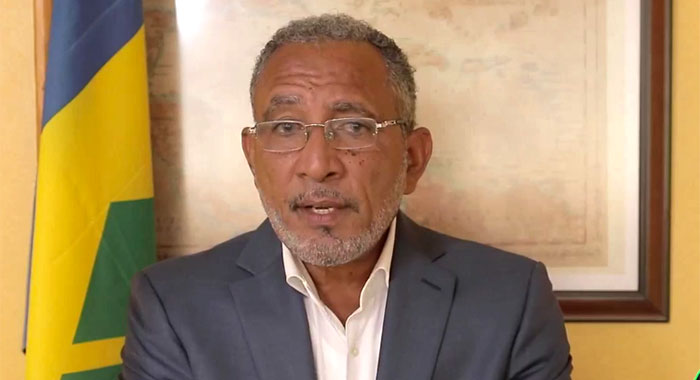 President of the main opposition New Democratic Party (NDP) Godwin Friday says that “a crisis in governance” exists in St. Vincent and the Grenadines (SVG) after last Thursday’s general elections, in which the Unity Labour Party (ULP) won nine of the 15 seats, but not the popular vote.

Echoing words used by now Prime Minister Ralph Gonsalves in 1998 — when a similar situation existed when the NDP was in office and the ULP in opposition — Friday said that the ULP has lost the moral authority to govern the country.

“There is popular outpouring of frustration and dissatisfaction with the ULP and Dr. Ralph Gonsalves. The people’s desire for change was heightened during the election campaign. Change from the oppressiveness, which is being experienced as a result of the past 19 years of rule under Gonsalves and the ULP,” he said in a national address.

“We heard that call and will, with increased vigour and determination, work to bring about the change we need and that you voted for.

“Political change — that is change in government — has been deferred, but it will not be indefinitely denied,” he said.

Friday, who was elected to a fifth five-year term as MP for the Northern Grenadines, said that the NDP will “spare no effort to bring about the necessary economic and social improvements we offered the people during the campaign and now continue to hold out as the path to a brighter future”.

He said that the underlying condition driving the desire for change, is that the Vincentian people “have been left in no doubt that the Gonsalves administration has become increasingly notorious for its subversion of constitutional government and the democratic process in our country.

“And this is compounded by blatant nepotism and cronyism, and by the lack of transparency and lack of accountability in the conduct of our nation’s affairs.”

For the first time, last Thursday, Friday led the NDP into general elections and the party was defeated for a fourth consecutive time, after being voted out of office in March 2001 — after 17 years.

He said that the people spoke in the general elections, when more electors cast ballots for the NDP then for the ULP.

“You gave the popular mandate to the NDP,” Friday said in the statement, which was broadcast on national television and radio, as well as social media.

“By your vote, you said clearly that you preferred the ideas, the plans and the vision for the country laid out by the New Democratic Party,” he said.

The NDP leader said he is immensely proud of the party’s campaign, adding that the NDP put forward “the best slate of candidates this country has ever seen.

“We put forward a plan to grow our economy, to create new jobs and to create economic opportunities for all, but especially for our young people.

“And our people embraced that message and voted for change, for a better future for themselves and their families.”

That change has been “deferred”, Friday said, noting that the ULP retained government by being declared winner of more seats than the NDP, as, under our Constitution, the party with the most seats forms the government.

“However, it is a fundamental and treasured principle of democracy that a government that does not have the support of a majority of the people lacks a mandate from the people to govern them. It lacks democratic legitimacy,” Friday said.

“For anyone to try and explain this away, as Dr. Gonsalves has tried, denies the reality of the argument that the ULP itself made in 1998, when they won the popular vote but the NDP won most of the seats.”

In his comments since the election, Gonsalves has attempted to downplay the fact that the NDP secured the majority vote, even as some citizens have noted his comments two decades ago, when the situation was reversed.

“As they argued then, we assert now that the outcome of the recent elections means that those in government now have lost the moral authority to govern.

“This creates a crisis of governance in our nation that will only be resolved when the people are again governed by a government that has the support of a majority of the people.”

“In the recent elections, the NDP secured swings towards us in 13 of the 15 constituencies, right across the nation,” he said, noting that even in North Central Windward, the prime minister’s constituency, he lost votes in every single polling station, including his hometown of Colonarie — where there was a swing of over 4% in favour of the NDP.

“He lost those votes to a vibrant young man, Chieftain Neptune, who because of the COVID-19 pandemic only had a few weeks on the ground before the vote,” Friday said, referring to the first-time candidate, who was the NDP’s standard bearer in that district.

He also noted that the ULP’s heir apparent, Camillo Gonsalves, the prime minister’s son and MP for East St. George, “suffered a massive rebuke” when first-time NDP candidate Lavern Gibson-Velox made up 421 votes, to cut the 2015 lead from 607 to 186 now vote.

Friday noted that this was a swing of nearly 4% towards the NDP.

Further, in North Windward, the NDP’s first-time candidate, Shevern John, a teacher, performed “brilliantly against enormous odds”, in reducing the ULP’s lead from 323 in 2015 to 62 now in 2020, Friday said.

“In our politics, these are remarkable achievements. It shows a fundamental realignment of our politics has occurred and augurs well for the movement to bring about change led by NDP,” Friday said and thanked voters for “the tremendous confidence and support given to our team and for voting for change.

“But, we must finish the job,” he said, adding that the declared results show that after four terms in government, the ULP “clings on to power precariously, having eked out severely reduced majorities in seven of their nine seats, with the slimmest of margins in North Leeward –a single vote”.

He told citizens that they should never let anyone tell them that their individual vote does not matter.

“Never tell anyone likewise,” Friday said, adding, “Never let anyone bargain or sell their vote to anyone because the future of the nation can literally hang on a single vote.”

He noted that the NDP retained six of the seven seats it held before the elections.