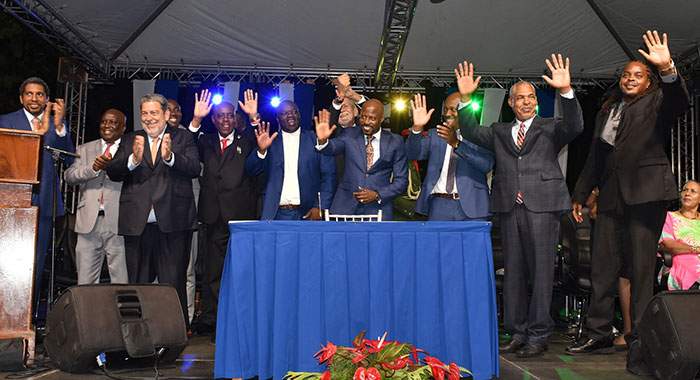 The new Cabinet of Ministers was “assembled with love and care and with the best interest of our nation, in the forefront of my mind,” Prime Minister Ralph told the swearing in ceremony in Kingstown, on Tuesday.

“The main ministries concerned with the economy and the creation of sustainable jobs and prosperity are in the hands of three young men — Camillo [Gonsalves], Saboto [Caesar] and Carlos James,” Gonsalves told the in-person and media audiences.

The trio, who are the MPs for East St. George, South Central Windward and North Leeward, heads the ministries of Finance and Economic Development; Agriculture and Fisheries, and Tourism and Sustainable Development, respectively.

“I am responsible for their coordination to make sure they are properly coordinated, and for the linkage between them and the other ministries in the government. I shall rely a great deal on these three young men over the next five years,” the prime minister said.

He said that the nine Unity Labour Party (ULP) parliamentary representatives voted into officer in Thursday’s general elections, as well as Senator Julian Francis, who are in the cabinet “are all persons of merit with varying skill sets and experiences”.

Three members of the Cabinet are in their 30s — Cesar, Brewster and James, Gonsalves said. Caesar turns 40 on Dec. 21.

The prime minister noted that three of the members of Cabinet, James, as well as West St. George and Central Leeward MPs Curtis King and Brewster are new to ministerial office.

Seven have held ministerial office for extensive periods of time of one or more terms, three of whom have been ministers continuously since 2001 – Montgomery Daniel, MP for North Windward, Senator Francis, and the prime minister himself.

He said some noteworthy alterations in the portfolio allocations are evident from a cursory look.

“I have shed a number of specific portfolio areas, namely airports and seaports development and administration, civil aviation, the public service and Grenadines affairs. I’m assuming, however, the portfolios of foreign affairs and information in addition to the main pre-existing ones of national security and legal affairs,” said Gonsalves, who led his ULP to an historic fifth consecutive electoral win.

The 74-year-old prime minister has said that he will not lead the ULP into another general elections.

He pointed out Attorney General, Jaundy Martin, a public servant, oversees the practical, day-to-day functioning of the legal affairs portfolio.

“That office holder has been a public office rather than a political one since my first prime ministership in 2001, an institutional arrangement of great significance not fully appreciated by many commentators on governance in our country,” Gonsalves said.

Gonsalves pointed out that Science and Technology, were help by Camillo, in the last government, go to the Ministry of Education.

Sustainable Development, Climate Change and Oceans have been added to the portfolios in the Ministry of Tourism and Culture, headed James.

Brewster has been allocated the Ministry of National Mobilisation and Social Development.

The prime minister noted that this ministry contains multiple portfolios touching and concerning the poor, the disadvantaged and marginalised.

“To this hefty range of portfolios have been added Housing and Informal Human Settlements,” Gonsalves noted.

“I am confident that this talented and committed young man would make a success of a ministry, which has been constructed as the veritable soul and spirit of the government. We will all assist Orando in his endeavours for him to be a success.”

Meanwhile, Daniel has been assigned the public infrastructural Ministry of Transport Works, Lands and Physical Planning.

The prime minister said that Works is always a challenging ministry requiring attention to detail, knowledge of the country and a calm industrious approach.

“Julian Francis has exhibited these attributes, so, too, Montgomery Daniel, but with a different style. And Montgomery Daniel knows Lands and Surveys and Physical Planning very well. And they are a good fit with him in every respect,” Gonsalves said.

He said that Caesar retains the ministry that “he loves and at which he excels” — Agriculture, Forestry, Fisheries, Rural Transformation Industry and Labour.

“He will accelerate his efforts to transform for the better the agricultural and fisheries sectors. He will uplift further the medicinal cannabis industry and transform also for the better the lives, livelihoods and production of farmers, fisherfolk and their communities,” Gonsalves said.

Marriaqua MP Jimmy Prince, communications specialist and former teacher, has been shifted from the Ministry of Education to that of Health, Wellness and the Environment.

“His overall skills, his patience, calm and enterprising spirit will serve him well in this impactful ministry. He will build upon the very good work done by Luke Brown, whom we thank very much for his service in the ministry,” Gonsalves said.

Browne, a former senator, failed to win East Kingstown for the ULP on his third attempt and will be going to London soon to do his professional law exams.

The prime minister said he will, and he will return within a year, adding, “I look forward to seeing Luke again.”

The prime minister said that his government will ensure that by early next year a chief executive officer is installed at the Milton Cato Memorial Hospital to run the nation’s major hospital services.

“Jimmy will also be at the forefront in the construction of the acute referral hospital at Arnos Vale, an anchor project in the proposed modern city at that location.”

He said that the Ministry of Education and National Reconciliation is a perfect fit for King, who has been an educator for his entire working life and was the former headmaster of the St. Vincent Grammar School.

“His central task is to deepen and broaden further the education revolution in all its multiple dimensions in the interest of our people.”

Ecclesiastical Affairs, which was attached to the Ministry of Education in the last government, was not mentioned among the portfolios in the new administration.

South Windward MP, Frederick Stephenson, who was responsible for National Mobilisation in the last Cabinet, has been appointed as minister in a newly configured Ministry of the Public Service, Consumer Affairs, and Sports.

“His experience as a public servant, including his years as an experienced customs officer will serve him in good stead in our quest to reform further the public service, a job which demands detailed attention,” Gonsalves said.

He said that Stephenson also has to put in place all the institutional arrangements to give effect to “the path-breaking consumer act crafted under [former Deputy Prime Minister] Sir Louis Straker’s wide leadership” and which was passed shortly before the last dissolution of Parliament.

“The Humble African along with Camillo have to make sure, too, that there is a full build out of Vincent Beache stadium at Diamond,” Gonsalves said.

He said that Francis — who was been appointed a senator for a fifth term — has been assigned ministerial responsibility for a new Ministry of Urban Development, Energy, Airports, Seaports, Grenadines Affairs and Local Government.

“He has to ensure among other things, that Kingstown develops further as a modern city of quality. He has to assist in effecting the construction of the modern port and the further development of the Rose Place area and he will have ministerial oversight of the Argyle International Airport, VINLEC and St. Vincent and Grenadines Port Authority. He will also have to work closely with the director and Deputy Director of Grenadines affairs in coordinating further development in the Grenadines,” Gonsalves said.