Friday ‘not going anywhere’; tells youth ‘retreat is not an option’ 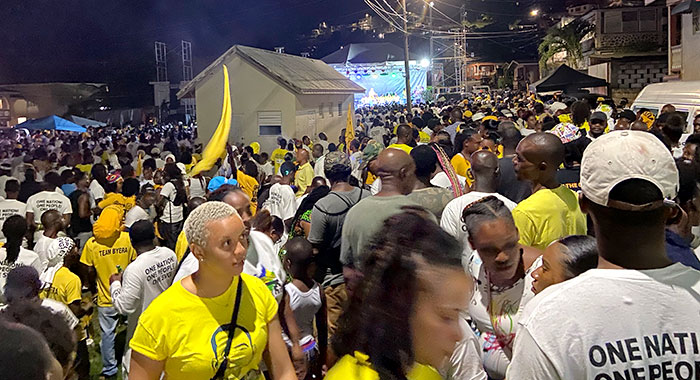 New Democratic Party president, Godwin Friday, says he remained committed to getting his party into office and is urging the nation’s youth to continue the struggle.

Addressing the nation Wednesday night, on the heels of last Thursday’s electoral defeat, the NDP’s fifth since 2001 and the first with Friday at the helm, he said:

“As for me, I am not going anywhere. I love my country too much. This is my life’s work and I am honoured to do it. The more people I meet and share a smile with, engage in a conversation or activities with, the more that love grows.”

Friday said he knows the “frustration and concerns that weigh heavily on our people following a difficult election with its inconclusive outcome”.

He was referring to the fact that the Ralph Gonsalves-led Unity Labour Party (ULP) won nine of the 15 seats in Parliament but the NDP won the majority vote.

The ULP begins its fifth term with one more seat than it held before the vote.

Under the country’s first-past-the-post electoral system, the party with the majority of seats forms the government.

“I am also keenly aware of the strength of our support, the deep yearning for change in our people. And I promise you, change will come,” Friday said.

“We must commit ourselves to that task for in completing it.  We will usher in a government that has earned the support of a majority of the people, and thereby set in place the essential foundation upon which our future prosperity and happiness depends.”

He said that succeeding will take a collective effort and that the NDP “will be the vessel that carries that movement to its successful outcome.

“It is our duty and we are committed to continue providing constructive leadership that will guide our activism and lead us to a brighter future for all of our people.”

The NDP leader expressed special appreciation to the nation’s youth.

“Thanks for your support. I urge you to remain engaged in the political process. In the recent campaign, your voice was loud and strong, and your courage was inspiring. Now more than ever, your country needs you.

“Retreat is not an option. Become and remain part of the growing movement that is necessary to bring the change our country wants.”

Friday said he is “as committed as ever to the task of bringing change as urged by you, our people, and as God Almighty permits. In all things, His will be done.”

He said that Vincentians are “a generous, kind-hearted, beautiful people.

“Our destiny is greater that our present circumstances. We must believe that always, so that setbacks and disappointments along the way will appear as mere speed bumps and potholes that can be avoided or surmounted on the road to our destiny.

“We will not let the lust for power in others deter us.

And we will not go quietly into the night as some may wish.  We have come too far for that.”

He said that what is taking place in the country is bigger than partisan politics and therefore bigger than just the NDP.

“This is a social movement on the march to free our country from fear, intimidation, bribery, and corruption; a movement to create jobs and bring about a brighter future for all our people.

“We will use our endorsement by the people to move our country forward.

“For as is written in John chapter 1, verse 5 ‘The light shines in the darkness, and the darkness has not overcome it.’

Let us work together. Do not be afraid of taking action when it is right and just to do so.

“We will create a better country and truly live the dream of one nation, one people.”

One reply on “Friday ‘not going anywhere’; tells youth ‘retreat is not an option’”