NDP to continue to push for lower VAT 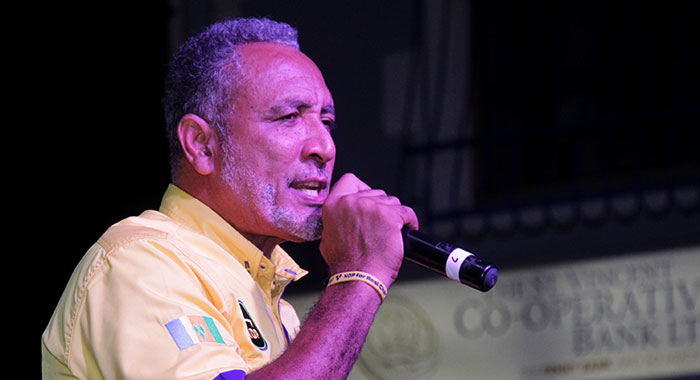 The opposition New Democratic Party (NDP) says it will continue to push for a reduction in VAT and a higher salary for Youth Empowerment Service (YES) workers, two of the promises it made in the campaign for the Nov. 5 general elections.

“And for you, all the people of this country, we know you are overtaxed, we know that poverty is on the rise, we know that people are catching hell throughout St. Vincent and the Grenadines and there are those who … know they are comfortable, but, shamelessly, would say things that would be so detrimental, you wonder how people can represent these as good ideas for the people of this country,” NDP president, Godwin Friday, told the party’s “Thank You” Rally in Kingstown, on Saturday,

“But I say I know the pain you are feeling. I said to them and I say to you, we will reduce that pain immediately and we will continue to push for it. We want to reduce the VAT from 16 to 13%. That is still on our agenda and we will push for it.”

In the Nov. 5 general elections, The Unity Labour Party was returned to office for an unprecedented fifth consecutive term, winning nine of the 15 parliamentary seats under the nation’s first-past-the-post system.

However, Friday noted that more people voted for the NDP in the elections, an indication that more electors supported the policies of the NDP.

Friday said that if the government includes any new taxes in the upcoming budget, “they will hear from us because the people of this country have suffered enough.

“You have suffered enough and you have told me and my colleagues that you want us to present to you the people and to govern the people of this country with the vision we presented through the campaign.

“We will continue to put forward that vision because we believe it is in the best interest of the people of St. Vincent and the Grenadines.”

Friday, a five-term MP for the Northern Grenadines, said that the ULP ran a campaign of fearmongering and jingoism.

“We know what that leads to. It leads to a dead end because they have not put forward any solution to the problems of this country,” he told party supporters, adding that this means that the NDP must continue the fight on behalf of the nation.

Ahead of the polls, the NDP released leaked data from the unpublished 2018 poverty assessment study, which shows that Vincentians need to make EC$527 a month to live above the poverty line.

The opposition had promised to increase YES workers’ monthly salary from EC$450 to EC$650.

“We have to stand up for that,” Friday said.

“I am going to urge and continue to fight for the young people so that those that want to go and study that they don’t have to mortgage their entire family home at 8 or 9% interest so that they can go to educate themselves to come back to develop themselves, their families and their country. We will continue that battle.”

The opposition had also promised to reduce student loan interest from 8.5% to 4.5%. Sometime after he made that commitment, Prime Minister Ralph Gonsalves announced that beginning next year, the interest will be reduced to 6.5%.

Noting the difference between the popular vote and the number of parliamentary seats, Friday said there was a crisis of governance in the country that only fresh elections could resolve.

There is also an economic and social crisis in our country. Poverty is on the increase by their own measure. The economy of this country is dead and they came with their lies during the campaign and they maligned every good suggestion and policy that we have, trumpeting all kinds of lies, creating fears in the hearts of our people to make them feel that somehow the New Democratic Party was leading them over a precipice, when, in fact, they were the ones who were doing it because they have no answers to the problems of the country,” he said.

4 replies on “NDP to continue to push for lower VAT”