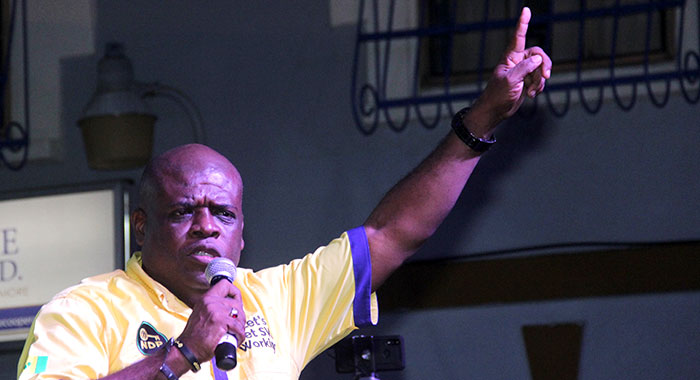 Roland “Patel” Matthews, the opposition MP for North Leeward who was defeated in the Nov. 5 general elections, says that he did not lose at the poll, but that the returning officer gave the seat to his opponent, Carlos James.

After a 17-hour recount, the returning officer, McArthur Gordon declared James, of the ruling Unity Labour Party (ULP), winner of the seat by a single vote.

The preliminary results on election night said that James — who Matthews defeated by 12 votes in 2015 — had won the 2020 poll by seven votes.

However, at the final count, James was declared the winner by one vote, and the opposition New Democratic Party (NDP) later said that Gordon had refused to count for Matthews three votes that would have made him the winner.

Matthews, speaking at the NDP’s “Thank You” rally in Kingstown on Saturday, said the media should ask the returning officer, why he “gave” the seat to James.

Matthews who took to the stage with the same high energy as he had during the election campaign, told constituents to “stand firm”, saying, “we’re not giving up.

“North Leeward and SVG, we’re not giving up. I thank you for all you did. You came out in your numbers; you supported Patel Matthews and the New Democratic Party. You did well because you will know even before election, they throw everything at North Leeward. They throw money; some people even get some old window and all to vote for Labour.

“But, they can’t keep me down. They cannot keep we down and I am sending a message loud and clear that when I came into politics, I do so for the people and my continuation in this field will be if the people of North Leeward want me to continue and from all discussion with them, they say, ‘Mr. Matthews, ah you  arwe want.’”

Matthews, a former teacher, recounted his history in electoral politics, noting that his journey began 20 years ago when he was a student at the University of the West Indies.

“I was called to the fore by the people of the beautiful constituency of North leeward to be their representative. The first time around, I didn’t make it, but I stand firm. I did not say if I did not win I wouldn’t come back,” he said, echoing James’s words after his 2015 defeat.

“In 2020, the people came out and they voted for Patel Matthews and the New Democratic Party,” Matthews said.

Matthews was addressing NDP supporters at a time when the party has suffered its fifth consecutive electoral defeat, even as it won the popular vote for the first time since 1998.

He called on party supporters to stand firm, saying that challenging times are ahead.

“And the New Democratic Party, we have to band together to face the challenges. We have to be our brother’s keeper going forward, we have to support each other going forward and as I say to you,” Matthews said and again urged party supporters to be ready when their leader calls on them.

“We have to make it happen. We cannot allow a minority government to be doing us as they please. No way, José. No way! So continue the fight, my brothers and sisters… be of good courage as we go forward into unknown and uncharted times.”

Matthews told constituents not to lose hope “because Patel Matthews nah go nowhere at all. Them ah go tired to see me face”.