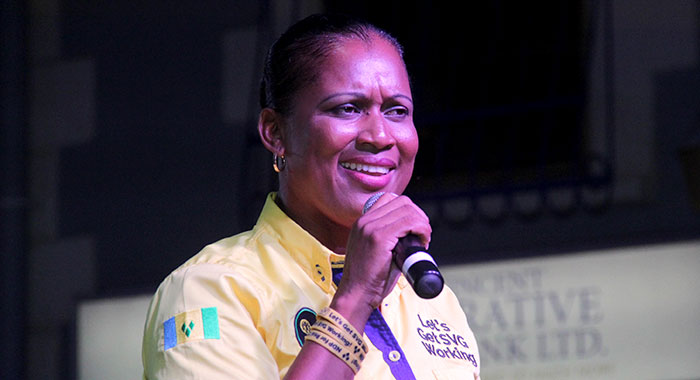 New Democratic Party (NDP) politician, Shevern John, who was forced to resign from the teaching service to contest the Nov. 5 general election, will not reapply for her job, despite the offer of the government.

She told iWitness News, on Wednesday, that she will be appointed an opposition senator in the new Parliament.

John was forced to resign her teaching position ahead of nomination day, despite the 2005 agreement between the Teachers’ Union and the ULP administration.

Under the Collective Bargaining Agreement, teachers who have been members of the union for three years should be allowed up to six months’ no-pay leave to contest national elections.

If unsuccessful, the agreement says, teachers would be reappointed to the service with all benefits intact.

However, the Ralph Gonsalves government failed to honour the agreement when John applied for leave despite a January 2019 court ruling against the government on the matter.

After the ULP’s historic fifth-term win, Gonsalves announced that he would have a conversation with the head of the Public Service Commission about reappointment of teachers who contested the 2010 and subsequent elections who are yet to reach retirement age.

However, after Debbie Charles, who contested the 2015 and 2020 elections on behalf of the ULP and lost, was not appointed a senator, some of Gonsalves’ critics have said that his move was not magnanimous to the opposition candidate, but to make provision for Charles to re-enter the teaching service if she so desires.

Meanwhile, on Saturday, John told constituents that she is willing to represent them in the next general elections.

“Look at me, I may look the same to you when I started out a couple months ago. But, believe me; I am stronger in all facets of life. I have grown and I am more actively aware of the many situations and needs within the constituency,” John told the NDP’s rally in Kingstown.

“And to the people of North Windward, I will not give up. I’m standing strong and committed, ready to serve you again in another election in St. Vincent and the Grenadines. We must bring it home. And by the grace of God, we will bring it. Stay strong my people,” she said.

The ULP was returned to a fifth consecutive term in office by winning nine of the 15 parliamentary seats under the nation’s first-past-the-post electoral system, but the NDP won the popular vote.

“We are in the majority and I am proud to be a part of the majority. This has been quite an experience for me,” said John, who was forced to resign her teaching post to contest the election, notwithstanding the 2015 agreement between the government and the Teachers’ Union and  the January 2019 court ruling on the matter.

John said that when she started on her political journey she “could never have imagined how interesting, how exciting and how challenging it was going to be.”

She said she undertook the journey after much prayer and searching and consultation.

“I visited practically every home in North Windward and every village in North Windward. It brought me into contact with every age spectrum within the constituency and, as a result, I experienced a wide range of emotions as I listened to the many citizens and stories and observed the conditions under which residents live.

“I was moved with compassion as I listened to and observed the plight of the people in the various communities; the wanton neglect across the constituency often spurred angry responses. I was energised by the excitement and potential of the young people who saw, in us, a ray of hope as they anticipated the change, which seemed inevitable.”

She said that there was, however, “an overwhelming sadness on election night when it became increasingly clear that the majority of St. Vincent was once again being denied the change they had voted for.

“I must admit that I was extremely disappointed, but I’m still here,” she said.

John said she found much strength in her Christian faith and particular portions of scripture, which she quoted.

She said that as NDP leader Godwin Friday had said, the NDP team would continue to fight for the change that the majority of Vincentians voted for.

“I will continue to work with the residents of North Windward who supported me overwhelmingly. We would work together to realise the necessary changes and improvement within the various communities.

“I have been serving my community in various ways and at various levels over the years and I pledge to continue in that vein. I definitely can’t do anything more. It’s in my DNA.

“… To the people of North Windward, you accepted me into your home and often into your confidence. You voted for me in numbers not previously seen. We almost did it. We would go all the way next time and I wish it will be soon… We did well and I am persuaded that we will soon savour the success we anticipated. Let’s keep the team growing and grow and nurture, so we can work for the necessary change when it is time again,” John said.