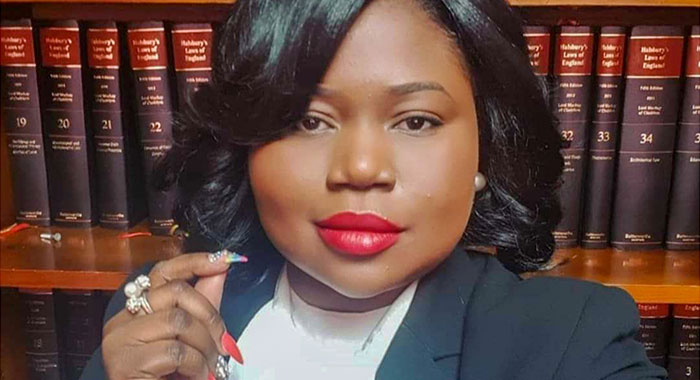 Senator Keisal Melissa Peters, a lawyer, will take up office as Minister of State in the Ministry of Foreign Affairs.

A 34-year-old lawyer will be the only woman in Prime Minister Ralph Gonsalves’ Cabinet when she is appointed Minister of State in the Ministry of Foreign Affairs come Nov. 30.

On Wednesday, Gonsalves announced on NBC Radio that Keisal Melissa Peters, a lawyer, of Campden Park, has been appointed a senator effective last Monday, Nov. 16.

Come Nov. 30, when the new Parliament convenes, Peters will take up office as Minister of State in the Ministry of Foreign Affairs which Gonsalves heads.

Gonsalves said that he had considered a number of other women for the position, but he settled on Peters, a West Kingstown resident, during a Saturday meeting at the Official Residence of the Prime Minister.

“… there are several persons I considered, several women, some of whom I contacted and others whom I did not contact even though they would have, in my view, measured up.

“But for one reason or another, nothing connected to politics in the sense of partisan politics — but I considered in all the circumstances that Keisal Melissa Peters — KMP, as I call her for short, is suitable,” the prime minister said.

Gonsalves said that Peters’ ministerial assignment has been delayed because of her current employment status.

“… because, naturally, she would have files which she has to put in order at her office with her chambers,” he said of Peters, who has been employed for the last decade or so with Elizabeth Chambers, headed by Stanley “Stalky” John, QC.

“It’s only a professional thing to do,” Gonsalves said.

The prime minister said that in due course he would introduce Peters to the nation at a press briefing.

Gonsalves noted that two of the government senators are females, the other being   34-year-old lawyer, Ashelle Morgan, who will be nominated as deputy speaker of the House of Assembly.

The other is 36-year-old Rochard Karim Ballah, aka “Pitbull”, who has been appointed Parliamentary Secretary with responsibility for information in Gonsalves’ Ministry of Foreign Affairs, National Security, Legal Affairs, and Information.

Julian Francis, who is general secretary of the ruling Unity Labour Party, has been appointed a senator for a fifth term.

Gonsalves noted that three of the senators are in their 30s, adding that this should be “an indication”.