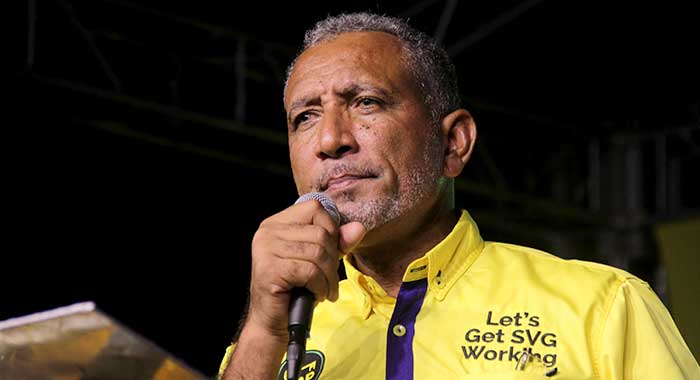 Opposition Leader Godwin Friday says Prime Minister Ralph Gonsalves’ comments that the nation’s sailors did not vote for him in the Nov. 5 polls are meant to intimidate.

“That is just to create fear among people. They are sending coded messages to people, which suggest to them that somehow they got your number, they got your information,” Friday said Monday on his New Democratic Party’s (NDP) programme on NICE Radio.

“And all of that is a means of intimidation, is a way of creating in our country a system that appears to be democracy but functions anything but in a democratic way,” he further said.

Last Wednesday, in his weekly appearance on NBC Radio, Gonsalves said that the sailors, who have been furloughed because of the COVID-19 pandemic, formed a network against his government.

He said this was the case although his government had put systems in place for their sage repatriation and had given them EC$300 a month in unemployment benefit.

But Friday said that the election was one in which the people voted for change.

He was referring to the majority vote held by the NDP, even as Gonsalves and his Unity Labour Party hold the majority of seats — nine — in the 15-member Parliament.

“This election that we have had here, the people voted for change against enormous obstacles, the full weight of the Treasury being thrown against the New Democratic Party and its candidates, plus the private resources that were used by the ULP,” Friday said.

“These are facts that made a difference in the outcome of the election, that the people accepted the message of the NDP,” he said, adding that people came towards the NDP even in ULP strongholds.

“How is it then that in the North Leeward, a seat that we hold that they would go the other way?” he said, referring to a seat that the NDP lost by one vote to the ULP challenger — after a contentious 17-hour recount.

Friday said that the reason for the loss could not be the message that the NDP relayed to voters during the campaign.
“And we know very well that this election was bought at a very high price, moneywise and in terms of the corrosion that is taking place in our democracy,” Friday said.

“And this is just not the way the system is intended to function. So we have to stand up as a people and say we are going to fight this thing on the ground, change hearts and minds, to resist when it is necessary and to continue to push the agenda and hope that we, in the New Democratic Party present to the people and that the people have embraced.”

Friday said he is “the majority leader in the country” and this is what electors voted for.

He said that the ULP has been saying that persons who stayed away from the polls did so because of apathy.

“Many of those people stayed home because they are afraid,” Friday said.

“They are ULP people who are fed up of them, they want to vote NDP but they’re afraid, because here they are telling them they know how we vote.

“So that is really the effect of creating this culture of fear in our election system where people don’t know if their ballot is safe or not and that is something that they deliberately spawn.”

He said that the ULP has been doing this for years, noting that the party previously said that it knows how many “Syrians” voted for the ULP in a previous election.

“… how they know and all these things, going all the way back there?” Friday said, adding that during the trial of the petitions that the NDP filed after the 2015 vote, “many irregularities were exposed and all of these come about because you have officials that were appointed not based on competence but based on party loyalty”.

The petitions, which challenged the outcome of two seats, were dismissed at the end of a trial for lack of evidence.

He said that during the 2020 election campaign, the government created fear and misinformation among voters.

“And they’re continuing to do it post elections by continuing this ridiculous notion that somehow sailors didn’t vote you.  How you know how sailors vote?” Friday said.