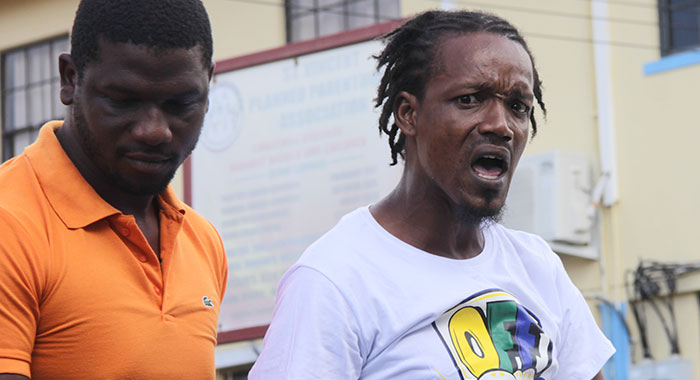 A detective attempts to remove Jason Williams, right, from the police vehicle on Friday. (iWN photo)

An accused bank burglar created a scene at the Kingstown Magistrate’s Court, on Friday, as he demanded that police give him back his shoes, ahead of his arraignment.

The man, Jason Williams, and his co-accused Solomon Laborde arrived at the court in the pan of a police pick-up truck, accompanied by detectives from the Criminal Investigations Department in Kingstown.

The duo was charged with burglary in connection with the heist at First St. Vincent Bank, which netted EC$37,000 in cash last week.

Also in the pan of the vehicle was Jrann Browne, against whom the burglary charge was withdrawn just before his arraignment, but who will be made to answer a charge of obtaining EC$100 from the heist.

When the detectives instructed the accused men to disembark the vehicle, Williams, who was handcuffed to Browne, refused, saying he was not going to do so until police return his shoes.

“Boy, me waah my shoes!” the accused man said as officers were pulling him from the vehicle.

One of the detectives told Williams that he could not get his shoes as they are an exhibit in a matter.

As Williams entered the foyer of the courtroom, he began resisting the efforts of officers to escort him into the building, again demanding his shoes.

At this point, a woman, a civilian, outside the courtroom noted that Williams was handcuffed to another person.

Williams and Browne were handcuffed together and the officers released Browne from the handcuff.

At this point, Williams intensified his resistance as police attempted to handcuff his hands together.

When the man was escorted into the courtroom, he continued his unruly behaviour, demanding the return of his shoes.

He took off his t-shirt, saying that police had soiled it during the squabble.

Williams further said that his relatives had brought the shoes as well as other clothing for him to wear to court.

He said that the police had given him the clothes but had taken the shoes.

Prosecutor Corporal Corlene Samuel appealed to Williams to conduct himself properly in the courtroom, where the court had been stood down before the arrival of the unruly defendant and his co-accused.

Police officers also told Williams to put on his t-shirt, adding that he could not be in the courtroom like that.

However, Williams continued his defiant behaviour and another corporal of police told the detectives to take Williams back to the police station until he had calmed down.

Williams was escorted from the courtroom but returned a few minutes later, wearing his t-shirt and a pair of slippers and cooperative with the instructions of the police.

Police have alleged that Williams had the unlicensed weapon in his possession as they conducted a search as part of their investigation into the bank burglary.

Williams has pleaded not guilty to the charge and the chief magistrate told him on Monday that she was denying bail at that point, but the court could expedite his trial.

“I don’t want no speedy trial. I go like to get a lawyer,” the accused man said.

The chief magistrate told him that she would review his bail application on Nov. 30, at which point the date for a trial would be set.

“But Williams asked how he could get a lawyer when he was being denied bail.

The chief magistrate, however, noted that lawyers go to the prisons to consult with their clients all the time.

She further explained Williams his right to a telephone call to consult counsel while he is on remand.

One reply on “Accused bank burglar kicks up over shoes”