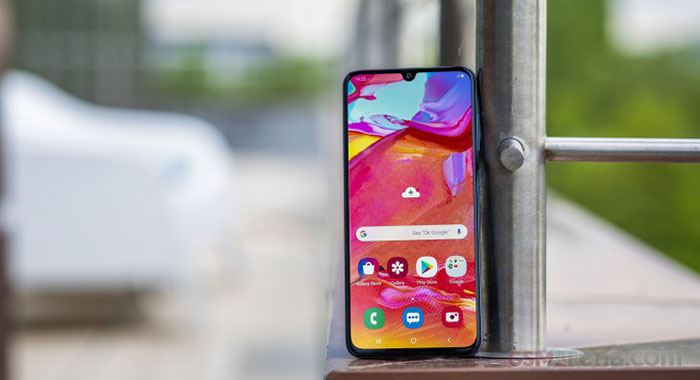 An internet photo of a Samsung A70 cellular phone.

A 16-year-old who went to the Glen Learning Centre, on Tuesday, to apply for enrolment there, stole a teacher’s phone, resulting in a criminal charge being brought against him.

On Wednesday, at the Kingstown Magistrate’s Court, the youth pleaded guilty to a charge that he stole the phone, a Samsung A70, valued at EC$1,500.

The facts, as presented by prosecutor acting, Corporal of Police Corlene Samuel, are that at 11:10 a.m. on Tuesday, the teacher left the staff room and went to a classroom to deliver a message to a student.

On her return, she saw the defendant and another young man, whom she later learned was his cousin.

The defendant was applying for enrolment at the institution and was standing about two inches from the teacher’s desk.

The teacher later discovered her phone was missing and made checks, all to no avail.

The defendant and his cousin immediately left the compound and the matter was reported to the security officer, who tracked them down and took them to the Glen Mobile Police Station.

The duo were handed over to the Calliaqua Police Station and denied knowledge of the disappearance of the phone.

The defendant, however, later changed his story and told the police that he would take them to where he threw the phone.

He was escorted back to the area, but the phone was not recovered.

The defendant told the court that he has a phone of his own and it was in the bag he had brought with him to court — presumably the one he had in his possession when he was arrested.

“So you went to enrol, you have your own phone and someone who is likely to be your teacher, you went and took her phone?” Burnett said.

“Why would you do that? Because I want to know what is going on in your head,” the senior magistrate further said.

The teen, who spoke so softly that his responses to the court were at times inaudible to persons in the public gallery, said that he lives with his sister.

Senior Magistrate, Rickie Burnett commented that the sister, who was also in court, appeared to be a child also.

Asked about compensation for the complainant, the defendant who works at a car wash for EC$180 per week, said he was planning to ask his boss to help him to pay for it.

The court ordered that the teen compensate the teacher in the sum of EC$1,500 by March 26, 2021. The matter was also adjourned to that date for an update.