PM ‘never ever’ considered appointing his daughter a senator 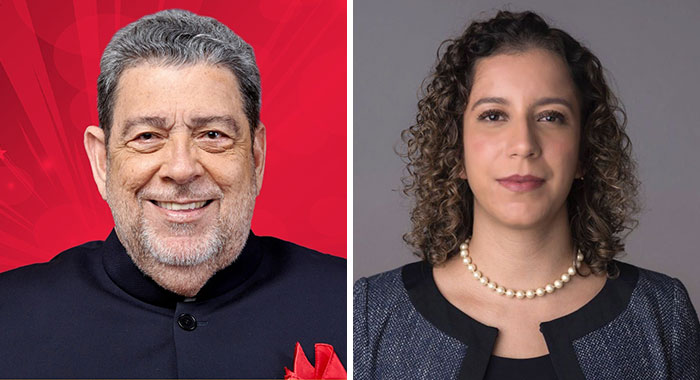 Prime Minister Ralph Gonsalves says he never considered appointing his daughter as a senator and junior minister in his Foreign Affairs Ministry.

“My daughter Isis, who is doing a remarkable job on the Security Council team along with the other members of our Security Council team at the United Nations, was never ever in my contemplation, neither was any other member of the staff at the United Nations in my contemplation to be senator and junior minister,” the prime minister said on NBC Radio last week.

He however said that Isis, a lawyer, as well as any other member of the country’s team at the United Nation’s Security Council, is qualified to fill the post.

At the swearing in of the Cabinet on Nov. 10, Gonsalves announced three of the government’s four senators.

He said then that he would shortly advise the governor-general on the appointment of the fourth senator, who he said he intended to have assigned a junior minister in his officer with responsibility for foreign affair and foreign trade.

The prime minister said there are a lot of meetings to be held overseas, in foreign affairs and foreign trade, many of which would not require his prime ministerial attendance.

“So I will have to get a junior minister to help me with that work along with other things,” the 74-year-old leader said.

On Wednesday, Gonsalves said that a public discussion about Isis’ possible appointment began with an article published by “an online journal”.

He said the discussion expanded, as if it was factual and was carried forth “hysterically” by two radio stations.

“So a long discussion went on on that; and, of course, with all kind of bile,” Gonsalves said.

“And I don’t know why people wouldn’t just stop this foolishness,” he said.

And while he did not name the online publication that began the discussion about his daughter possible appointment, Gonsalves chided iWitness News for reporting that an all-male Cabinet had been sworn in on Nov. 11, although that was in fact the case.

Gonsalves said that his government has appointed more women and more young women than any other in the history of the country.

Referring to the online outlet that began the discussion about Isis, Gonsalves said he does not jump when something is written on a blog.

“You think your virtual world is the real world?” the prime minister said, adding that when it was being said on radio that it was Isis who would be appointed senator and junior minister, he had already written to the governor-general advising that lawyer Keisal Melissa Peters be so appointed.

He said that “a raft of people” at the St. Vincent and the Grenadines Mission to the United Nations is qualified for and suitable for such a post.

“They have to satisfy the minimum legal qualification laid down in the Constitution and the law statute.

“But they also have to be suitable for the particular post and the suitability, I will make the assessment and the criteria, including someone who is au fait with the foreign policy of the government and has a progressive bent of mind to accommodate our nationalist, anti-colonialist, anti-imperialist, anti-racist, you know, Black Lives Matter.

“At the same time, supportive of the fundamental principles of the Charter of the United Nations, non-interference in the internal affairs of states, going for peaceful settlements of dispute, multilateralism not unilateralism, small island developing states’ focus, climate change, sustainable development, all the critical questions which we address on an on-going basis in foreign policy and which we are in the forefront — our work in international organisations and so on and so forth, and who has, in my view a background of this, and who I say, child of the education revolution, good to have a woman in the cabinet, a young woman and the person is a 34-year-old woman, a lawyer of over 10 years standing, Keisal Melissa Peters from the West Kingstown side of Campden Park,” he said.

Gonsalves said that Isis had gotten an Alliance of Small Island States (AOSIS) scholarship and had also received two scholarships to go to university:  a national exhibition scholarship from the government of SVG and one from the University of the West Indies.

He said his daughter has “a working knowledge” of Mandarin, having spent a year in Taiwan, learning the language.

“She is also has a working knowledge of Spanish,” he said, adding that Isis was also admitted to the bar in New York state, having passed the exam on her first attempt.

“Not because she is my daughter, I mean, heavenly father, and I know the good reports which we get,” adding that Isis also has “a master’s degree in a particular branch of law’.

He said that people often talk about Isis and Jimesha Prince — daughter of Health Minister Jimmy Prince – who is also a member of the SVG UN team because of their relationship to politicians.

Gonsalves, however, noted that the team also includes  Halimah DeShong, who holds a doctorate, who is part of the SVG UN team, having been granted two years’ leave from the University of the West Indies, where she lectures.

He said that DeShong had been “languishing” for three years teaching at the Girls High School and captain of the national and under-23 netball team before his government made provisions for her to pursue her university education.

The prime minister said that critics do not mention “a young lady from Byera Hill who did a first degree and master’s degree”, who he did not name, who is also part of the team.

“You never used to see country people going to these things,” the prime minister said, adding that people would mention Isis and Prince because they are family connected to people in politics,” Gonsalves said.

“But they wouldn’t mention all these other persons. They won’t mention the young man who went to Russia to study who is there [at the Security Council]. They wouldn’t talk about the young men both of whom are developing well,” he said, but, again, did not mention name.

“They wouldn’t talk about a young woman who studies in Venezuela who is up there also, we set up as part of the team,” he said, without mentioning a name.

“They must just cut out this rubbish,” the prime minister said.

In August 2013, Gonsalves appointed his son, Camillo Gonsalves, a lawyer, as a senator and Minister of Foreign Affairs.

Camillo came to the post after serving almost a decade as SVG’s ambassador to the United Nations.

He was elected on Nov. 5 to a second five-year term as MP for East St. George.