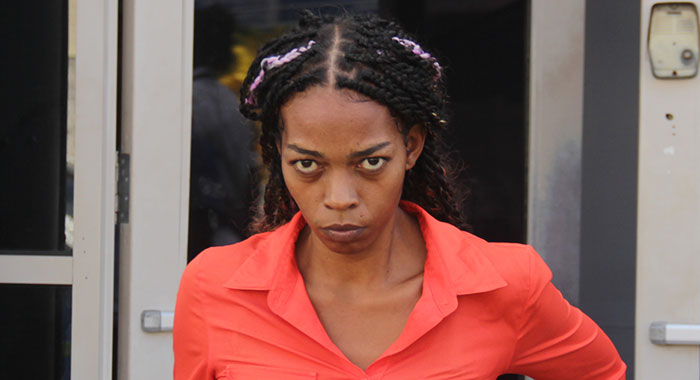 When Senior Magistrate Rickie Burnett, on Friday, remanded a woman to prison for the weekend ahead of her sentencing, he thought he was giving her a new experience.

However, the only thing new about Erescia Phillips’ prison stay was the prison.

The senior magistrate learned on Monday, at Phillips’ sentencing that she had already spent 18 months in a foreign prison for grievous bodily harm.

On Monday, the 27-year-old mother of a 4-year-old son was ordered to pay her former boss, EC$234.45 in compensation, representing the sum of money she had used from a debit card she stole from him on the first day of the job.

If Phillips does not pay the fine by Dec. 12, she will have to spend three months in prison.

She was further bonded for one year in the sum of EC$1,000 or six months in prison.

Phillips pleaded guilty, on Friday, to a charge that on Nov 15, at Diamond, she stole EC$234.45 in cash, the property of Joel Bascombe, of Kingstown Hill.

According to the facts read by prosecutor acting Corporal of Police Corlene Samuel, Bascombe owns an apartment complex at Kingstown Hill and lives in one of the units with his girlfriend.

Around 7 p.m. on Phillips’ first day on the job, Bascombe checked a countertop in the bathroom for the two debit cards and found that they were missing.

On Nov. 16, he checked online one of the bank accounts associated with the cards and saw that there had been a transaction in the sum of EC$234.45.

The complainant contacted his bank, which indicated that the transaction has been made at Randy’s Supermarket in Diamond.

He visited the supermarket and the surveillance footage revealed Phillips using the card to make a purchase.

The store told Bascombe that Phillips had told them that she was his wife.

Bascombe questioned Phillips on Nov. 18 and she handed over the card that was not used and denied having the other one.

It was not until Phillips was told about the surveillance footage at the supermarket that she admitted to her offence.

Burnett said that Phillips’ actions had “all the elements of a crook”.

He told her that he had remanded her to teach her a lesson as what she did was “planned and well-executed”.

The senior magistrate noted that someone had given Phillips a job and she stole the debit card on the first day on the job and used it, but denied it when confronted.

The prosecutor asked Phillips if she has always been living in St. Vincent and she said yes.

But when pushed, Phillips admitted to the court that she had spent 18 months in prison overseas for grievous bodily harm.

“You have not learnt one thing from that experience,” the senior magistrate told Phillips on hearing her admission.

“In less than a day, look at what you have done,” he told the woman.

“When I remanded you on Friday, I thought I was doing something to you, hoping you will change but I am learning that that experience was new to you only in St. Vincent and the Grenadines,” Burnett said.

Phillips, however, said that her previous prison stint was when she was 16 years old.

“You are 27 now, but like you are graduating,” the senior magistrate responded.

The defendant, who spoke so softly that at times her comments were inaudible in the public gallery of the small courtroom, said she had committed the crime because her son was sick and his father was not maintaining him.

“How could you expect to pull this off in a relatively modern place like St. Vincent and the Grenadines,” Burnett asked.

Phillips told the court that she wanted to go home and meet her son — meaning that she did not want to be sent back to prison.

“If you want to do that, be an honest young woman,” the senior magistrate told her, noting that the maximum penalty for her crime was two years in prison.

“And once you do that (commit theft), prison is possible. So don’t tell me about wanting to go and meet your son,” Burnett said.

He said he had applied the sentencing guidelines in his head and had concluded that a non-custodial sentence was appropriate.

After handing down his sentence, Burnett said:

“Now, Ms. Phillips, lemme tell you something and I can say this based on the facts that are before me: if within a day you are this tempted it means that if put in a similar position, you will do the same thing. So check yourself.”