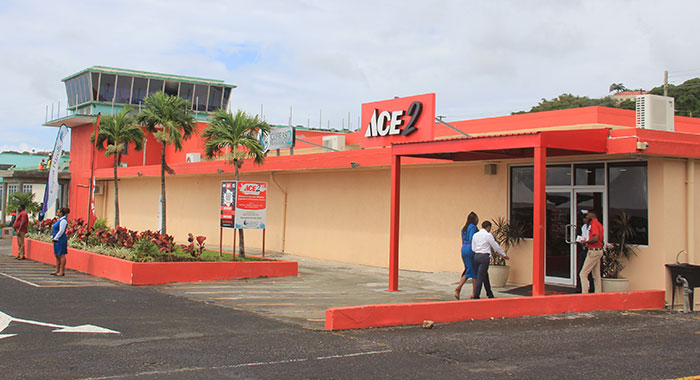 The Ace 2 and Coreas Pharmacy 2 stores at the Joshua Centre in Arnos Vale. (iWN photo)

Coreas Hazells Inc., on Thursday, officially opened Ace 2 and Coreas Pharmacy 2, at the Joshua Centre in a section of the terminal building of the decommissioned E.T. Joshua Airport.

The company became the first to open a business at what National Properties Ltd., the state-owned company that owns the site, is building out as a mall on 200 acres of land that the government has identified for a new city at Arnos Vale.

Speaking at the ceremony, Joel Providence, managing director of Coreas Hazells Inc., noted that this year, the company quietly commemorated the 175th anniversary of “a Coreas genealogical antecedent” — Hazells Ltd.

He said that, on Thursday, the company was opening its second store in 12 months.

“By this time next year, we hope to add yet another and then within two years, a fourth,” he said.

Providence said it is within the company’s strategic vision “to bring our service to the people.

“As I said to a good friend last evening, when it really comes down to it – it’s all about people serving people strategy.

It is in our DNA, cultivated by our leaders current and past,” he said as he recognized his predecessor, Frankie Young who was among the government and company officials as well as invited guests at the event.

Providence said that in 1945, the company celebrated its staff, a celebration that was preceded by a bad patch, which included hardships brought on by the World War, which affected the poor and merchant class alike.

“This was compounded by the fact that Hazells had also just lost one of its buildings in Kingstown to a fire. But the company still had its faithful and loyal staff,” he said.

“The same philosophy is embraced today. Our growth is reflected in brick and mortar images, but what good is a structure of cement and steel if it is not filled with good karma, by trained people who have a sense of purpose, who embrace values of fairness, integrity, accountability and dedicated service,” he said.

“I am grateful to the people who make our business competitive who continue to provide us with a high score of engagement, survey after engagement survey, people who work in the front line and those who work in the back office. This opening is a testimony as well of the confidence that we have in those who work here and who are committed to serving contractors, homeowners, hoteliers, radio station talk show hosts, farmers and so on. We are about people serving people.”

He said that at the new location, ACE 2 stocks over 20,000 well-priced hardware, household and pharmaceutical products of quality.

“A beautiful expansive power aisle that when you look down its corridor from the eastern end near our customer service desk, you will be able to see right down beyond the store, right through the shopping centre to the other end of Joshua.”

Meanwhile, Brian George, the company’s divisional manager, Building Supplies and Auto, told the ceremony that the store was much more than a simple relocation project.

Ace 2 had been located near to the roundabout in Arnos Vale.

“We had outgrown our old location which we occupied for approximately 11 years and were actively considering our options for how we could address the shortcomings and challenges of the previous site and plan for the future,” George said.

He said that the new location offers more retail space, significant additional parking and significantly more warehouse space so that the company can expand all of its product offerings.

“This site now has construction supplies such as lumber, steel and cement available for our customers. We also anticipate increased customer traffic particularly once the remaining sections of the mall become operational,” he said.

George, however, said there are some issues to be addressed such as vehicular traffic circulation.

“But we shall continue to work on this with National Properties and the police. Hopefully we can get this matter fixed quickly. To be honest, it is one of the few frustrating complaints that customers have raised with us regarding the new location,” he said.