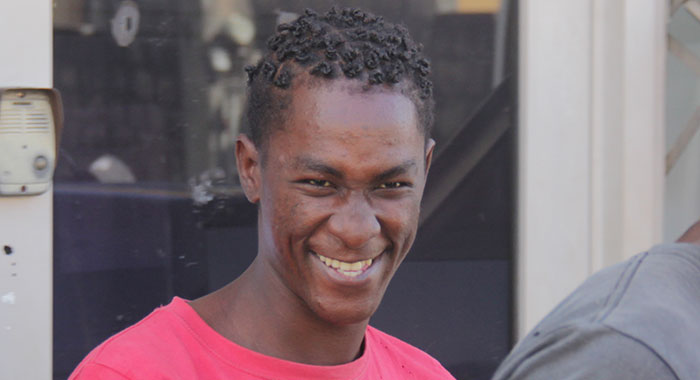 The defendant, Renson Roberts on his way to prison. (iWN photo)

A Clare Valley man who burglarised a shop then attacked and beat the owner with a hammer will spend the next 18 months in prison.

“You cannot burglarise somebody’s business place and beat them with a hammer. There is only one place you can go,” Senior Magistrate Ricky Burnett told the defendant, Renson Roberts.

Roberts was sentenced, on Tuesday, at the Kingstown Magistrate’s Court on a charge of burglary and wounding charges related to his Nov. 16 burglary of the shop of fellow Clare Valley resident, Claudius Lewis.

He also stole EC$570 during the burglary.

It was the second time that Roberts was being sentenced for burglarising a shop.

“The only difference between the two is that you didn’t bet the complainant then,” the senior magistrate commented.

The defendant told the court that he was “intoxicated and frightened at the same time” when he took a hammer and beat Lewis in the head after being caught red-handed.

“You are a lucky man. You came out and went straight into the path of the complainant. If it was a different person, you could’ve been dead,” Burnett told Roberts.

Prosecutor, acting Corporal of Police Corlene Samuel noted that Lewis’ injuries could have been worse.

The magistrate noted that, according to the medical records, Lewis sustained an 11.5 centimetre long wound to the head, and three wounds that took 12 stitches to close.

“And the rules I have to work with, it has to be concurrent sentences,” Burnett said, suggesting that he was considering consecutive sentences for Robert’s offences – burglary and wounding.

He further noted that none of the EC$570 stolen from the shop was recovered.

Samuel said that as far as she understood it. If the court says one year in prison, it has to one year, but if it says 12 months, this could be discounted.

The senior magistrate told the defendant that the court was giving him credit and a discount on his sentence for his early guilty plea.

He, however, said that that discount was erased by the aggravating features of the case — beating a man with a hammer in his head in his own business place.

Burnett sentenced Roberts to nine months in prison on the burglary charge and 18 months for wounding Lewis.

The sentencing will run concurrently.