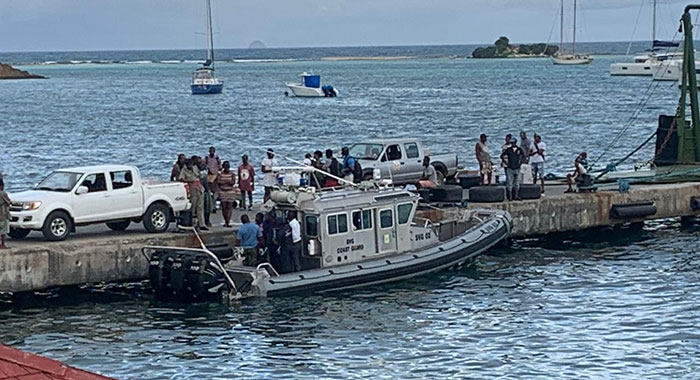 A Coast Guard vessel prepares to leave Union Island, on Thursday, with the body of the deceased and the woman who is assisting the investigation.

An 83-year-old man in Union Island was found dead on Thursday after an alleged altercation with a younger woman toward whom he reportedly made an unwanted sexual advance.

The dead man has been identified as Calvin Hutchinson of Valley, Union Island.

Reports out of the southern Grenadine island are that the woman, said to be in her 20s or 30s, was “living” at the man’s house and was in some sort of “relationship” with him.

iWitness News understands that the man is said to have made a sexual advance to the woman after she exited the shower on Thursday.

He is said to have told her that he had already taken his “pill”, but the woman resisted his sexual advance.

A source on the island told iWitness News that the woman reportedly said that she and the man got involved in some pushing and the man took a pot and struck her with it in her face.

She is believed to have returned a blow, which caused the man to “keel over” a chair where he was found dead when police responded after the woman went and lodged a report with them.

Detectives from Kingstown were dispatched to investigate the death and they returned to the city Thursday evening aboard a Coast Guard vessel.

The Coast Guard vessel also carried the body of the man accompanied by the woman who has been taken into custody as the investigation continues.