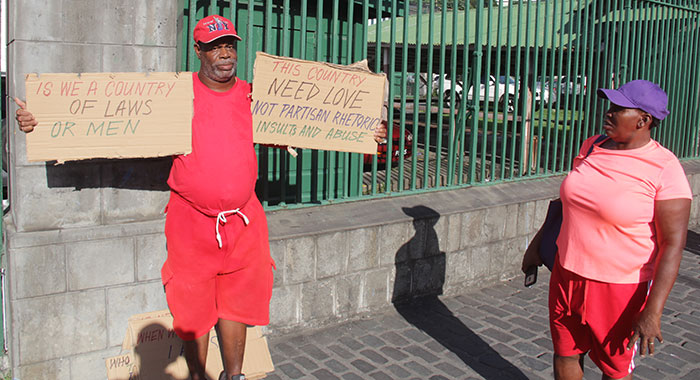 Public sector workers in St. Vincent and the Grenadines continue to subsidise the government, says Joel Poyer, a member of the Public Service Union (PSU) who took to the picket line on Monday, as Parliament convened.

Poyer told iWitness News that this subsidy comes in the form of workers continuing to pay for their transportation and uniforms in the absence of refunds from the government.

Poyer mounted a protest outside the Parliament building in Kingstown as lawmakers met for the first time since the Nov. 5 general elections.

He said he had also picketed the Ministry of Agriculture earlier that day.

“Daily-paid workers in the Ministry of Agriculture, four fortnights now and have not received their payment and it is continuing,” he told iWitness News.

“Two months and nobody is telling them anything and they are supposed to be going on their vacation, which is another two fortnights, which would be three months, you would say.

“This is the Christmas season. How you going to be treating workers in that kind of way when they have gone beyond the call of duty?

“Workers on a whole continue to subsidise the government. What I mean is that they keep on suffering themselves to perform government duties,” Poyer said.

Poyer said workers are also not being paid their travel allowance.

“… they’re travelling to go out to continue to do their work and they are not getting refund back,” Poyer said.

He said workers used to get an annual uniform allowance of EC$750, but the government changed this to issuing the workers with their outfits.

“And they haven’t gotten it for two years now,” he said.