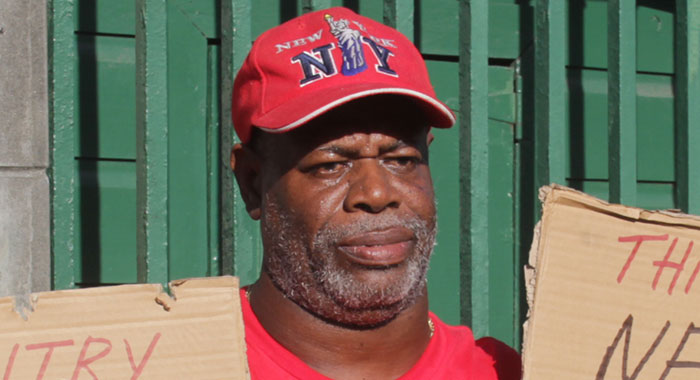 A member of the Public Service Union (PSU) is accusing the government of appealing a court ruling against it and not prosecuting the appeal.

The allegation by Joel Poyer echoes a similar statement by
Prime Minister Ralph Gonsalves against the opposition New Democratic Party (NDP) in the 2015 elections petition case.

On Monday, as the 11th Parliament met for the first time — following the Nov. 5 general elections — Poyer mounted a protest outside the House of Assembly in Kingstown.

His protest began before scores of demonstrators; some dressed in NDP-branded clothing and presumably party supporters, gathered on the other side of the road carrying slogans aimed at the ruling Unity Labour Party (ULP) government.

“I am demonstrating for peace in this country right now,” Poyer told iWitness News, adding, “The country needs healing.

“We don’t want no partisan rhetoric. When the politicians and them speak, they must speak the honest truth and with love in healing this nation. We have too much division. And it must be a country of laws and not of men.”

He said he was saying this because “too often it’s men who are operating and not the law of the country”.

Poyer said there were many instances of St. Vincent and the Grenadines being a country of men, rather than of laws.

He cited as an example the January 2019 court ruling against the government in a case that the PSU had brought against the Public Service Commission.

Poyer was not promoted for 28 years during his career as a public servant and he was among five public servants who testified on behalf of the PSU in the case.

High Court judge Justice Esco Henry found that the PSC had failed to observe principles of fairness, transparency and objectivity in exercising its function under Regulation 19 of the Public Service Regulations in respect of promotion of the five officers.

However, the government appealed the case and the appeal is yet to be heard.

One source in the legal fraternity told iWitness News that the government is insisting on getting a transcript of the hearing though this is not absolutely necessary to argue the points of law on which the appeal hinges.

At the same time, the government has not allocated more resources to the preparation of transcripts, amidst a backlog, the source said.

Issues surrounding the preparation of a transcript have also been cited as having affected the NDP’s ability to prosecute the appeal in the election petition matter.

Gonsalves said last month that the government wants the NDP to pay up the legal costs that the court awarded as a result of those petitions.

Meanwhile, Poyer said he would continue to protest for as long as necessary.

He told iWitness News that picketing is his “life’s work.

“I have been picketing all my life. Anybody who knows me will tell you I have been standing up. Once it’s justice being done, expect me to be part of it,” he said.