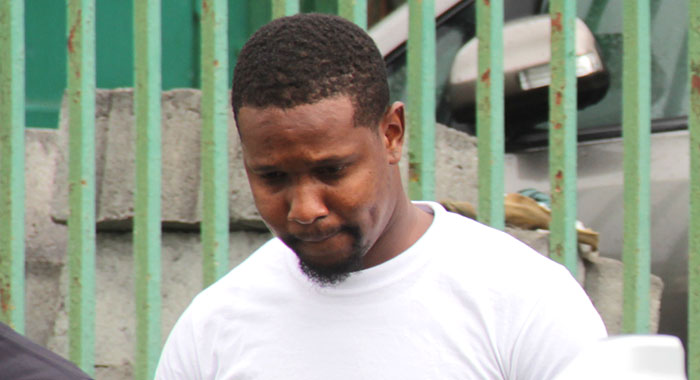 Child rapist Kawanie Williams was sentenced to 15 years in jail for his crime. (iWN photo)

A 26-year-old Green Hill man was, on Thursday, jailed for 15 years for unlawful sexual intercourse with an 8-year-old girl.

Justice Brian Cottle handed down the sentence on Kawanie Williams, who was convicted 7-2 by a nine-member mixed jury on Nov. 23, after a full trial.

Williams committed the crime when he was 19 years old.

The facts of the case, as read by the judge, are that on Nov. 16, 2013, the “academically slow” child, as she usually did, went to Williams’ home so his sister could help her with her school work.

At one point while the child was at the house, Williams’ sister went into a bedroom for a nap, leaving the child alone in the living room.

Williams arrived at home and pulled the child into another bedroom and removed her jeans and underwear and had sex with her.

He ejaculated on the ground and then told the child to go back to the living room.

The child did not report the matter immediately, but two about weeks later, she attended a session at her school that dealt with child sexual abuse.

The child then reported to her teacher what had happened to her and the school informed her mother, who, in turn, reported the matter to the police.

A doctor examined the child and noted partial absence of her hymen and concluded that her condition was consistent with having been penetrated.

The judge said that in her impact statement, the victim said she experienced depression and anxiety and felt betrayed by someone she regarded as a family friend.

She now has trust issues and receives counselling at school, but still blames herself for not knowing how to complete her schoolwork and, therefore, requiring help.

The victim has been taunted by fellow students and has had to learn how to ignore these taunts.

The judge noted that in St. Vincent and the Grenadines, the maximum penalty for unlawful sexual intercourse with a girl under the age of 13 is life imprisonment, a notional sentence of 30 years.

Justice Cottle noted that the convicted man’s lawyer, Stephen Williams, had suggested that the court consider case law when sentencing his client.

The judge, however, said that the court was required to follow the promulgated sentencing guidelines instead.

He said that since the victim was under 10, the man’ crime was exceptional in terms of its consequences, and at the highest level of seriousness — “A” — because there was an abuse of a position of trust and the significant disparity in age.

The court held that the victim was particularly vulnerable because of her age and the fact that the defendant knew she was “slow”, as his sister described the child.

The judge began with a sentence of 18 years.

He found no aggravating features of the offence but held that a mitigating feature was the fact that no violence besides that inherent in the crime was used.

Justice Cottle found no aggravating features of the offender and gave him credit for the fact that he had no previous conviction.

And while Williams was subsequently convicted for burglary, the judge did not take this into account while arriving at his sentence.

He further noted that Williams was still young when he committed the offence.

Considering the aggravating and mitigating features and the possibility of rehabilitation, the judge moved the starting point to 15 years.

He then deducted from the sentence the 11 days that Williams had spent on remand, leaving him to serve a sentence of 14 years, 11 months and 19 days.

In mitigation, Counsel Williams had said that the defendant is a Christian and attends the Miracle Tabernacle Church in Green Hill.

He attended Bethel High School but quit in Form 3 and later enrolled at the Kingstown Technical Institute for one year, before exiting prematurely to seek employment, the lawyer had said.