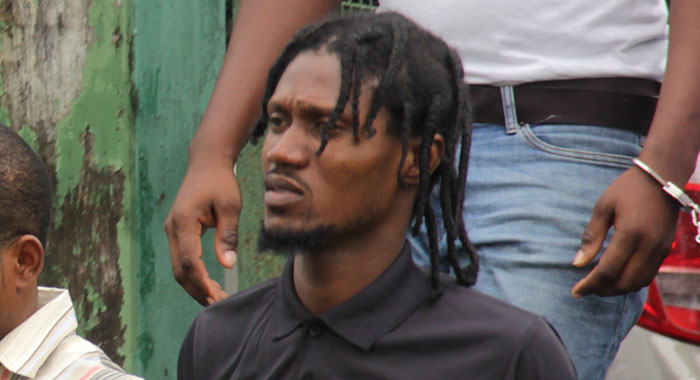 Antonio Simon on his way to his sentencing. (iWN photo)

A Georgetown man who on Dec. 21, 2016 stabbed to death a villager who had earlier attacked his sister and stepfather will spend a further one year and 20 days in prison for his crime.

Antonio Simon, 28, had already spent three years, 11 months and 10 days on remand for his offence when Justice Brian Cottle handed down the sentence at the High Court on Thursday.

This means he will spend a total of five years in prison for his crime.

Simon was originally indicted on a murder charge in connection with the death of Vancinto Bascombe, 40, of Langley Park, but the Crown accepted a guilty plea on the basis of provocation.

The facts of the case are that Bascombe, who had two daughters, was at home on the date of his death.

His children’s grandfather came to the nearby public road and spoke to one of his granddaughters.

Bascombe objected and took his daughter into the house, returned, approached and physically assaulted the children’s grandfather, who was older than him.

The assault caused an injury to the man’s mouth.

A short time later, Simon’s sister arrived and remained on the public road and inquired about what had happened.

Bascombe left his home, went to Simon’s sister, pushed her, causing her to fall to the ground.

Simon, who was at his home not far away, was told of the incident and went to the scene.

When he got there, Bascombe held on to him and began pulling him toward (his) Bascombe’s yard.

Simon took a knife from his pocket and stabbed Bascombe several times.

The injured man was taken to Georgetown health centre, where he died of his injuries.

Simon turned himself into the police that same evening, telling them and he and Bascombe had been in a fight and he had stabbed him up.

He told police that he had been cutting up some pork when he heard of the altercation and left immediately to go there.

Simon said that on his way, he realised that he still had the knife in his hands and he put it in his pocket.

When he got to the area, he saw Bascombe beating his sister and when he asked Bascombe why he had done so, Bascombe struck Simon with his fist.

Simon told police that he reacted in like manner and Bascombe held on to his shirt and began pulling him to the yard.

Simon told officers he then took the knife from his pocket and stabbed Bascombe several times.

At the sentencing, Simon, apologised to the court for his action saying it was never his intention to take Bascombe’s life.

He told the court it was when Bascombe grabbed him and said, “’I will chop you up like how I chop up your sister’, I got frightened and pulled the knife and started firing stab.”

He said he did not know how many stabs he inflicted on Bascombe.

“I was frightened. It was never my intention,” the defendant told the court and expressed his remorse to the man’s children, adding that they had lost both parents.

He also apologised to the man’s mother

“I was told that she is not here. I will like the message to reach her, telling her that I am sorry,” he said.

“If I could bring him back, I would, but I can’t and I am sorry,” Simon told the court.

Simon’s lawyer, Israel Bruce had earlier told the court that the deceased man was clearly in an aggressive mood, “fuelled by consumption of a particular type” on the day that he met his death.

He said that his client was 24 years at the time, is a graduate of Georgetown Secondary School, where he obtained seven subjects.

He then went on to work at a carpenter and was employed in Canouan up to the time of the offence.

Justice Cottle said that the court must balance the competing aims of criminal punishment namely, retribution, deterrence, prevention, and rehabilitation.

He cited former Chief Justice of the Eastern Caribbean Supreme Court, Sir Hugh Rawlins, who when he was a justice of appeal, said:

“In summary, the sentencing Judge is required to consider, fully, two fundamental factors. On the one hand, the Judge must consider the facts and circumstances that surround the commission of the offence. On the other hand, the Judge must consider the character and record of the convicted person. The Judge may accord greater importance to the circumstances, which relate to the commission of the offence. However, the relative importance of these two factors may vary according to the overall circumstances of each case”.

Justice Cottle noted that manslaughter is a serious offence that reflects the fact that a life is lost, adding that the maximum penalty is life imprisonment, with 15 years as a starting point.

He said that in the United Kingdom, sentencing judges take into account the level of provocation in cases of manslaughter by reason of provocation.

Where there is a high level of provocation over a short period, they begin with a starting point of three years.

Justice Cottle said that Simon is a relatively young man, has no previous conviction and his conduct after the offence says that he is a good candidate for rehabilitation.

The judge said Simon expressed his remorse in sincere terms and is a young man who made “a terrible error in judgement in a difficult situation.

“Still, a human life had been taken,” the judge added, noting that this is a serious criminal offence.

Justice Cottle said he saw no reason to move away from the 15 years starting point for manslaughter.

He said an aggravating feature of the case is that multiple stab wounds were inflicted using a bladed weapon.

He, however, noted that Simon had no previous criminal conviction, has shown remorse, turned himself in and cooperated with the police.
The defendant also had a reasonable explanation about his possession of the knife at the time, and had been provoked in his action by Bascombe’s behaviour.

Having considered the mitigating and aggravating features, the judge moved the starting point down five years.

He gave Simon a one-third discount on the 10 years for the guilty plea.

Simon had spent three years, 11 months and 10 days on remand, which was further subtracted to the sentence.

The judge also subtracted two years to reflect “the extreme provocation” that Simon faced on that day.

The judge had said that this would leave Simon with a final sentence of four years and 20 days.

However, Bruce noted an error in the arithmetic and when this was sorted out, Simon was left with a sentence of one year and 20 days.