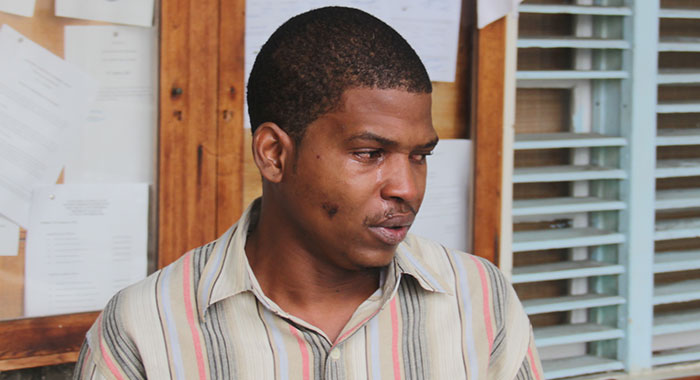 A man, whose eyes were already streaming tears as he exited the High Court after his sentencing on Thursday, cried openly as he embraced his girlfriend and repeatedly said, “I will never do it again.”

The man, Akeem Laidlow, had just been given an opportunity to avoid a three-year sentence, if he could avoid conflict with the law — as he had done since November 2017 – when he was charged with robbery.

Laidlow may have benefitted from the clinical submission in mitigation by his counsel, Carl Williams, a former Crown counsel.

However, according to Justice Brian Cottle, it was the fact that the victim of the robbery, Andre Kydd, had expressed a desire for leniency on Laidlow that secured his second chance.

“You should say a word of gratitude to the virtual complainant in this matter. Because, without him, I would have imposed the sentence of six years and three months,” the judge said after imposing the three-year sentence, suspended for three years.

The Murray’s Village man was charged, along with fellow villager, Nigel Cain, that on Nov. 2, 2017, at Richmond Hill, they stole one white Samsung Galaxy Express 3 cellular phone the property of Andre Kydd, of Murray’s Village, and at the time of doing so and in order to do so, used force on Kydd.

However, he pleaded guilty to the charge on Nov. 9, after receiving legal advice.

The facts of the case, as presented by the trial judge, are that shortly after 8 p.m. on Nov. 2, 2017, the complainant, Kydd and Bradley Bailey were walking along Richmond Hill Public Road.

As the men got near the tennis court, two masked men came from behind Mahogany Bar.

One of the assailants had his hand inside a bag, holding what appeared to be a gun. The other man searched Kydd’s pockets, while the one with his hand in the bag threatened to shoot Kydd.

They took a white Samsung cellular phone and a wallet containing identification cards from Kydd.

However, the wallet contained nothing valuable to the robbers, who threw it to the ground and told Kydd to retrieve it.
The robbers then fled on foot and the matter was reported to the police.

On Nov. 17, 2017, police stopped and searched Cain, who had two phones, including a white Samsung cellular phone.

He told the police that he and Laidlow had robbed Kydd of the phone.

Laidlow was arrested that same day and during a video interview, admitted that he was one of the two men who had robbed Kydd.

In his mitigation, Williams said that his aim was to persuade the court not to impose a custodial sentence on Laidlow.

The lawyer said that his client was “under no illusion as to the seriousness of this offence neither seeks to justify it and this is shown by his continuous level of remorse since the commission of the offence itself”.

He said that Laidlow had pleaded guilty as soon as he received legal advice.

The lawyer, however, told the court that at the time of this offence, Laidlow’s girlfriend was pregnant and the defendant was “in desperate need” of funds to pay for a scheduled ultrasound for the pregnant woman.

Williams said that since committing the crime, the defendant has turned his life around, is now gainfully employed and had avoided his co-accused.

He told the court that Laidlow is the father of two young children.

Williams said that while the court might have been considering a custodial sentence, such a punishment would have a detrimental effect not only on Mr. Laidlow himself but also on his family and friends.

“This will shatter the level of stability that is currently in place for Mr. Laidlow and will ruin any chance of Mr. Laidlow developing as an individual within the community and, therefore, I will suggest to the court that a non-custodial sentence will provide Mr. Laidlow a second chance to redeem himself,” the defence counsel reasoned.

Also, before passing sentence, the court heard from Crown Counsel Renee Simmons that Kydd had attended the hearing, having indicated to the Crown that he wanted the court to know that he was requesting leniency for Laidlow.

The Crown Counsel said that Kydd would have been in court to say so himself, but for the fact that he had received a call saying something had happened to his son at school.

In handing down his sentence, Justice Cottle noted the aims of criminal punishment: retribution, deterrence, prevention, and rehabilitation.

He noted that robbery attracts a maximum sentence of life imprisonment, a notional sentence of 30 years.

Justice Cottle said there was obvious financial loss to the complainant but minimal emotional distress, making it a category 3 offence, in terms of its consequences.

As regards the seriousness of the offence, Justice Cottle said that an imitation firearm or a firearm was used to threaten the complainant and the crime was a group activity.

These factors, he said, placed the crime at level A, the highest.

He, therefore, began with a starting sentence of 13 years and six months.

The aggravating features of the offence, Justice Cottle said, was that it was a group activity, the robbers were masked and the crime was committed along a public main road.

He, however, said that no weapon was actually produced or none was used and there was no violence inherent in searching the complainant’s pocket – mitigating features of the offence.

The court found no aggravating features in respect of the defendant, but cited, in mitigation, that he had cooperated with the police, confessed to the crime, and pleaded guilty at the first opportunity he had counsel.

The judge said that Laidlow appeared to have been motivated by desperate need and has expressed remorse.
The crime was a spur of the moment one, the stolen phone was returned to Kydd, and Laidlow played a minor role in the offence, the judge said, noting that Kydd had expressed a desire that Laidlow be shown leniency.

The judge, therefore, subtracted three years and six months to give a starting point of 10 years.

Laidlow received a one-third discount for his guilty plea, bringing the sentence to six years and six months.

He had spent two months on remand, bringing the sentence to six years, three months and nine days.

However, the judge subtracted three years in light of the complainant’s desire that Laidlow be given leniency.

Laidlow was, therefore, sentenced to three years in prison to be suspended for three years on condition that Laidlow does not commit any offence punishable by more than six months in prison.

Should this occur, Laidlow will go to prison immediately for three years.

2 replies on “Cell phone robber cries after getting second chance”