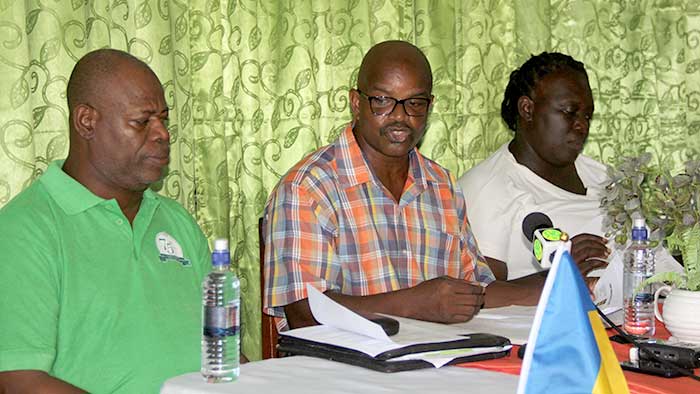 President of the Public Service Union, Elroy Boucher, centre, along with union spokesperson, Prudence Jeffrey, right, and union member Joel Poyer at the press conference in October, where they called for union members to vote against the ULP. (iWN photo)

A Member of the Public Service Union (PSU) who supported their call for public sector workers to vote for the opposition says that union members will soon get a chance to decide the fate of the union’s leadership.

At an Oct. 26 press conference, President of the PSU, Elroy Boucher called on members to vote against the Unity Labour Party (ULP) administration.

His position was similar to one the union took 20 years earlier, when it called on its members to vote against the then New Democratic Party (NDP) in favour of the ULP.

However, unlike two decades ago, the ULP was returned to office despite the union’s call.

Poyer was present at the press conference when Boucher urged union members to vote for the NDP.

He told iWitness News on Monday that the union had his support when it made the call.

“I supported the call because of the abuse that the union has been receiving over the years from the government,” Poyer said.

He said he could not say if the members of the union responded to the call to vote against the government.

“Some persons were annoyed. Some people were glad. I don’t know who people vote for and I don’t question them about who they vote for.  They have to know, but in this situation, workers have to know their rights…

Asked if he thought that the leadership of the union should resign in light of the ULP’s re-election to office that, Poyer said:

“Why? All they have to do, when the election comes, the membership do that. Election is soon. It is every two years. So the masses (union leadership) could decide whether or not they want that executive or choose an executive of their choice.”