Accused murderer says journalist has info that could prove him innocent 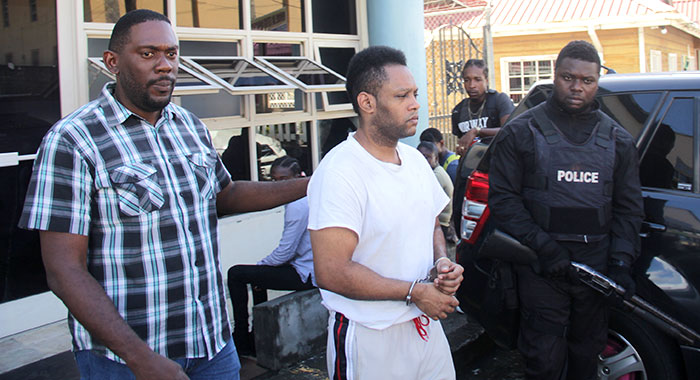 Veron Primus says he escaped from prison last week, for the second time in just over a year, to bring attention to the murder charge against him.

Primus, 33, is awaiting trial in connection with the murder of 33-year-old real estate agent, Sharlene Greaves, whose body was found at her office in Arnos Vale on Nov. 13, 2015, with stab wounds.

He said that he escaped because police and prison authorities have not assisted him in facilitating a conversation with the Director of Public Prosecution, Sejilla McDowall, regarding information, which, he said, could prove that he is innocent.

“Your honour, what I did was completely wrong and I probably shouldn’t even be standing here today,” Primus told Senior Magistrate Rickie Burnett, on Monday, after pleading guilty to two charges at the Kingstown Magistrate’s Court.

He pleaded guilty to a charge that between Dec. 7 and 10, 2020, at Kingstown, while in lawful custody at HMP, he escaped such custody.

Primus has been in custody since April 2016, when police launched an investigation into his alleged abduction of a fellow Vermont villager.

It was during that investigation that police uncovered information that led to the murder charge.

Last week, Burnett jailed Lowmans Leeward resident Shadene Farrell, 29, for one year for harbouring Primus and fellow escapee, Ulrick Hanson — who is charged with a separate murder — after they escaped.

And, during that hearing, the court heard that since his incarceration, Primus has spent time between HMP in Kingstown and the Belle Isle Correctional Facility, opened in October 2009 in Belle Isle.

Primus told the court that since being brought back to HMP, for almost a month he had been seeking the assistance of the police, having gotten into contact with “Sergeant Biorn Duncan, 740” — a detective attached to the Major Crime Unit.

Primus said he informed the detective — who was in court on Monday — that he (Primus) had some information that would prove that he is innocent of the murder, and, therefore, he wished to speak with the Director of Public Prosecution, Sejilla McDowall.

Primus said that he did not mention to any of these persons the kind of evidence because he did not trust the police.

He further said that after “this whole ordeal” — an apparent reference to his escape and recapture — and he was brought back to CID, he gave the officers the information.

“And everybody is giving me a block in this case and this is a high profile case that I am caught up in,” Primus said, adding that “everybody” had a perception that he is “nobody” and “nobody is willing to take that step to assist me”.

The defendant said he has checked everywhere for assistance “and there is only one person that has — not really that specific evidence — but evidence to that extent and that’s Mr. Kenton Chance. He doesn’t really know because I haven’t really said anything.”

Chance, who is executive editor of iWitness News, was in court at the time and seemed taken aback by the accused murderer’s comment.

Primus continued to look in the direction of the journalist as he spoke and the magistrate told him to address the court.

He emphasised that nobody is trying to assist him.

The senior magistrate, however, said that there is likely to be a trial in the murder case and the trial court would hear him on it.

However, Primus said he has been waiting for almost five years and seeking assistance but no one is trying to help him.

“And it’s completely ridiculous to have someone being accused of a crime and saying he has evidence to prove that he is innocent and no one is interested.”

Primus said he knows exactly where the evidence is, but it could be that the police have already destroyed it, adding that they have created “the blockage”.

Primus said that what he did — an apparent reference to the prison escape — was “completely wrong, but I just wanted the attention so I could publish it”.

He said that before he came to court, on Monday, the “commissioner” told him that after the court hearing they could go to the Criminal Investigation Department and sort out his concerns.

However, the prosecutor in the matter, acting Corporal of Police Corlene Samuel said Primus has a lawyer in the murder matter and the lawyer should sort that out.

Primus confirmed that Jomo Thomas is his lawyer in the murder matter.

Primus had applied for legal aid, and Thomas was the next lawyer on a list from which prisoners are randomly assigned counsel unless they could provide the court with a reasonable objection.

The senior magistrate said that Primus’ concern is one that he should have addressed at the appropriate time but his court was concerned with the charges that were before it, namely escaping lawful custody and damage to property.

The magistrate, after suspending the sitting for some time to consider his sentence, jailed Primus for 24 months for escaping lawful custody, and three months for damage to property. The sentences will run concurrently.

In addition to the Greaves murder charge, Primus has been indicted in New York in connection with the 2006 murder of 16-year-old Chanel Petro-Nixon.