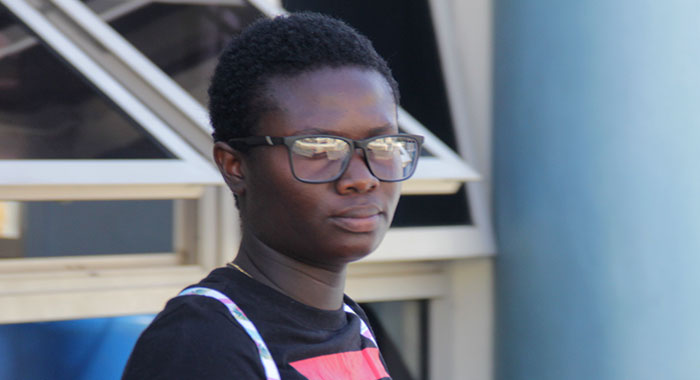 The registered nurse who conducted medical checks on the woman being tried for breaching her COVID-19 quarantine has told the court that she could not say, definitively, that the accused breached quarantine, in light of the last message relayed to her.

Jeyandra Jackson, 24, of Long Piece, Lowmans Windward, is being tried on a charge that she breached her quarantine on Oct. 27.

Last week, as the trial continued for a second consecutive Tuesday, Shernee Mc Dowald-Mc Donald, a registered nurse who is stationed at Biabou Clinic, Spring Garden Resort, and, on Thursdays and Saturdays, at Argyle International Airport, took to the stand.

In her evidence in chief, the prosecution witness said that at Spring Garden Resort, she is supposed to get the names of person in quarantine, their dates of birth, take their temperature, inform them why they are at the hotel, and let them know the date of their nasal swab for COVID-19 test.

McDowald-McDonald told the court that she knows Jackson, having seen her when she arrived at the airport on Oct. 22, and also at Spring Garden Resort.

The nurse said she did not interact with the defendant at the airport but was able to remember her because she was loud and was making “a big fuss”, saying that she did not want to go into quarantine.

McDowald-McDonald told the court that she next saw Jackson at Spring Garden Resort the following day, Friday, Oct. 23, after her arrival in the country.

The nurse said that she was at the resort on that day because she had to check on the persons who had arrived the previous day, Oct. 22.

She said that the extent of her conversation with Jackson was to get her name, date of birth, and told her that on the fourth day, a team will come and get a swab and on the fifth day she would go home for a further nine days.

The nurse told the court that Jackson had a baby with her so she took both of their temperatures then left.

McDowald-McDonald said she met Jackson on the following Monday, Oct. 26, and “repeated the same conversation”.

The nurse said she further asked Jackson if the swabbing team had come that morning and she answered in the affirmative.

The nurse said she did not speak to Jackson after that as she would “normally” call the hotel reception to inform persons in quarantine that they could go home and that they would be retested in nine days.

‘I do not want to go into quarantine.’

During cross examination by defence counsel Israel Bruce, the nurse, said that a document that had been tendered into evidence — a generic court order — is given to arriving passengers when they arrive at the airport.

The lawyer asked her what the instructions in the document are.

The nurse said it is a court order.

“It is simply stating that the person receiving that document is going to a quarantine for five days’ quarantine and then nine days at home.”

The nurse said that she remembers Jackson because she was loud and did not want to go into quarantine.

She, however, said that Jackson did not tell her that she did not want to go into quarantine.

Mc Dowald-McDonald said she heard Jackson tell Staff Nurse Daynia Clarke, “I do not want to go into quarantine.”

Mc Dowald-McDonald said that the room where the screening and Jackson’s interaction with Clarke took place is as small as the courtroom and everybody could hear what Jackson was saying.

However, the lawyer suggested that the only time that Mc Dowald-McDonald heard Jackson’s voice was when Jackson asked that the nurse be gentle with the swabbing.

Mc Dowald-McDonald said that was not the case. She further said could see clearly what Clarke was doing, but that she did not see Clarke sign a document and give it back to Jackson.

“At the time, I was not looking,” Mc Dowald-McDonald was saying, when the lawyer cut her off, saying she had answered his question.

She said that as far as she is aware the screening room is the first place that the quarantine information is given.

Mc Dowald-McDonald said that the norm is that the traveller is given the court order and the information is repeated to them.

McDowald-McDonald said she was not and later admitted that she could not say that the nurse who goes to Bay Hill, another approved quarantine facility, tells persons there that that they have to quarantine themselves for an extra nine days, after completing the hotel stay.

“That’s her duty,” McDowald-McDonald said, but conceded that she did not know for a fact that it was being done.

The lawyer told McDowald-McDonald that he would not call her a liar but would suggest that she did not remember what she actually told Jackson.

“I disagree,” the nurse said.

The nurse said she was “one hundred per cent sure” that she told Jackson on Oct. 23 that Jackson had to quarantine for nine days after the hotel stay.

She further told the court that she had told the police officer this when she was recording her statement, but acknowledged that this was not included in the statement.

The lawyer suggested that the information was not included in the statement because Mc Dowald-Mc Donald did not say it to Jackson.

“I did not? You must be confused,” the nurse responded.

“I must be,” Bruce said and the magistrate told the witness that the lawyer was only asking her questions based on her statement.

Mc Dowald-Mc Donald admitted that, according to the statement, she did not say this to Jackson.

“I did say it to her but maybe I didn’t say it to the police,” the nurse said, adding that she told Jackson this on the Monday — Oct. 26.

She further added that she told the receptionist on Oct. 26 to tell Jackson to stay at home for a further nine days.

“I was not there,” the nurse told the court.

Bruce asked the nurse if, in light of the fact that she did not know what the receptionist told Jackson, she could say that the defendant violated an order.

“Yes, she did,” the nurse maintained.

Pressed further on the matter, the nurse said she could not say so.

The nurse, however, said she did not agree that this is a loophole in the Ministry of Health’s communications systems with regard to dealing the COVID-19 measures.

Meanwhile, when redirected by the prosecutor, Crown Counsel Shakelle Bobb, the nurse told the court that the last time she communicated directly with Jackson was on Monday, Oct. 26.

‘your test is negative, you can go home’

The final person to testify in the case on Tuesday was Jessica Jack, of Cedars, a former receptionist at Spring Garden Resort, who is now a teacher on the SET Programme.

Jack said she knew Jackson well, including by the name Prea.

She said that she saw Jackson at Spring Garden Resort at the hotel on Oct. 22, when she came to check in for her mandatory quarantine.

Jack said that she did not communicate with Jackson again until Oct. 27 when she called the defendant to tell her that the nurse had said that her test was negative and she could go home.

During cross-examination, Jack confirmed that she told Jackson, “The nurse messaged me and say your test is negative, you can go home.”

Bobb then asked for an adjournment in the matter, saying that the complainant, Dr. Roger Duncan, the medical officer of health was not in court.

The court later learned that Duncan had not been summoned and granted the adjournment to today, Tuesday.