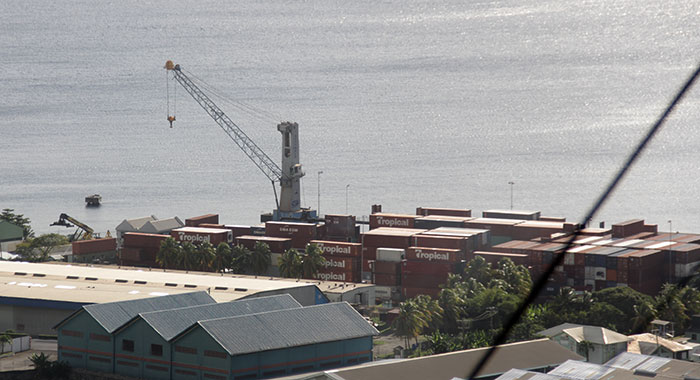 A months-old problem with the cranes and stackers at the Campden Park Container Port came to the fore last week as two ships had to leave St. Vincent without being able to offload their cargo amidst the heightened commerce of the Christmas season.

Prime Minister Ralph Gonsalves commented on the development on WE FM on Sunday, saying that he had discussed it with the directorate and management of the Port Authority.

“I don’t want to go into any details at this point but be assured that requisite action is being taken and will be taken further,” said Gonsalves, who has been succeeded by Senator Julian Francis as minister with responsibility for seaports.

iWitness News has failed in its repeated attempts since Friday to reach SVG Port Authority chief executive Bishen John for a comment on the situation.

However, we have been able to verify that two ships were unable to off-load and load containers at the port, the nation’s main cargo facility, and sailed away with the cargo, returning this past weekend.

A source with information about the situation told iWitness News that the port’s crane would usually offload the containers, but the crane has been down since February.

Since then, the ships have been using their on-board crane, manned by a Vincentian operator, to offload the cargo.

Last Wednesday, when the vessel “Tropic Carib” docked with 81 containers for St. Vincent and the Grenadines,

of those containers, 68 were located near the ship’s crane number 1 which was not working.

A decision was made to offload the container accessible by the operational crane then the ship would sail to St. Thomas to have the port there shift the containers around on the vessel so that its crane could offload them in St. Vincent.

However, the port’s stacker, which would stack the containers after they have been offloaded, broke down from sometime around 10 a.m. to around 1:30 p.m.

“I am not sure why the stacker was down this time, because it is every week there is some problem,” said the source, who spoke to iWitness News on condition of anonymity.

“About two weeks ago, both stackers were down and I don’t know why they don’t fix them,” the source said.

The source said that after the stacker was fixed, it had to load tractor-trailers that had been waiting to haul containers to Kingstown and other parts of the country.

However, because the operation was so slow, the vessel decided around 3 p.m. that any further delay would significantly affect its schedule.

By that time, port workers had been able to offload about eight containers in one hour and 20 minutes.

The source said that when the port’s crane is operating, workers handle some 20 containers an hour.

The ship, therefore, decided to halt the operation to offload the containers and hoist anchor. It returned on Sunday.

Further to that, there were more than 100 containers to be loaded onto the ship before its scheduled departure time.

“At that pace, the operation would have gone into the next day and into the following night and that would have put the vessel off schedule. If the Port’s crane was up and running, it would have taken care of all these problems,” the source told iWitness News.

The source told iWitness News that another vessel, CFS Pafilia”, left on Thursday with 38 containers that should have been offloaded in St. Vincent.

“One of the cranes on that vessel was not working and they did what they could with what they had.”

The vessel then decided to sail to St. Lucia to have the cargo shifted to the section of the ship with the functioning crane then sail back to St. Vincent on Friday, when the port’s stacker broke down twice.

On Sunday, Gonsalves, in his almost-weekly call to WE FM’s “Issue at Hand”, Gonsalves was asked to comment on the situation.

The prime minister said he had spoken to Francis, who had informed him that the issue with the crane may not be solved until sometime in the middle of January.

“The crane failed some time ago and what has happened is this: in these two circumstances where we had two ships that had to be turned back, their cranes also failed…

“But all systems are in place but I had told Minister Francis … the customer should not be pained for any errors, whether for which the ship has responsibility or the Port has responsibility and I myself reached out and spoke out to one of the two principals persons Greaves,” he said of the agent for Tropical, the ship that had gone to the Virgin Islands to shift the cargo around.

He said that the agent had assured him that once everything was done speedily Sunday evening there would not have been “any dislocation of anything.

“But, clearly, you know me well enough to know that – and there are things I cannot say — that I have raised already certain questions in relation to management — with management at the level of the board, the chief executive officer,” the prime minister said.