Hope for the best, plan for the worst — PM 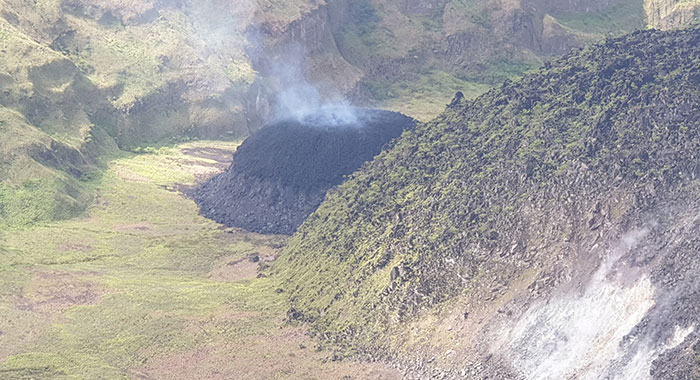 The new dome in the crater of La Soufriere. (Photo: NEMO St. Vincent and the Grenadines/Facebook)

Prime Minister Ralph Gonsalves, on Tuesday, told Vincentians to hope for the best even as his government plans for the worst as La Soufriere began an effusive eruption — an eruption in which magma oozes from the volcano.

“All the residents in the communities between Fancy to Georgetown and from North Leeward areas, from Belle Isle upwards, you have to be on alert, especially,” Gonsalves told a media briefing in Kingstown.

“At relatively short notice, you may get — MAY — an order to evacuate if, in fact, we have the scientific information that an explosive eruption will be occurring or at least the likelihood of it,” the prime minister said.

“So you have to be on your alert. It’s very important that we get that in our minds, particularly persons who are from Fancy to Georgetown,” he said.

Gonsalves said that the National Emergency Management Organisation (NEMO) had been briefing him on the activities of the volcano for several weeks and months and the government has been in discussion with the Seismic Research Centre at the University of the West Indies.

The centre is expected to deploy to Kingstown today, three scientists, namely St. Vincent-born professor of geology Richard Robertson, along with Lloyd Lynch, responsible for instrumentation and electronics and Ian Juman, an electronics technician.

Gonsalves said Minister of National Security in Trinidad and Tobago, Stuart Young, has granted clearance for the trio to leave the country amidst the COVID-19 pandemic and arrangements have been made with the Regional Security System to fly the scientists to St. Vincent.

He noted that Robertson had said it is important the scientists come to St. Vincent with their equipment to be able to measure in a more precise way what is taking place at the volcano and to advise the government.

“We, in turn, will inform — we have a responsibility to the public and we have to be responsive to the public and you will get all the information in the way that we have made Professor Robertson and Dr. Pat Joseph available to the media here on Zoom,” he said.

“I am urging all Vincentians to remain calm and to listen to the alerts from the National Emergency Management Organisation. All residents living close to the volcano are asked to make all necessary preparations to evacuate, just in case an order is given.

“I want to emphasise, no evacuation order is being given. This is really an alert because of the increased activities taking place at La Soufriere with the effusive eruption internally, with the heat that is coming out and with the steam that is coming out.”

He urged residents not to “tempt fate”, saying, “Nobody should be going up there and if you are up there, you have to come out cause the place there will be very hot.”

There is widespread illegal cultivation of marijuana on the slope of the volcano, and many ganja farmers live on their farms.

Gonsalves said that all recreational visits to the volcano are to be suspended with immediate effect.

“And please, I am asking you to refrain from visiting the volcano at this time due to the heat itself, but very much so the strong sulphur can also affect your respiratory system. And, of course, if you are up there, you don’t want to be there if you have an explosive eruption. That is why you can’t go and tempt fate.”

The prime minister said that, among other things, the National Emergency Management Council, at its meeting on Tuesday, would follow through elements of the national emergency plan as it relates specifically to the volcano.

Among the things that have to be done in case the worst takes place is to specify the inventory for vehicles, private and public, that would be available to move persons.

“We have to identify buildings, including guest houses, if we have to evacuate persons, we have to do so in safe areas, clearly, which would mean the areas which are in the south, the southernmost portion of St. Vincent, and we have to have all the various sets of people mobilised.”

He noted that the team from Trinidad would bring additional equipment to help to predict what is likely to happen at the volcano.

“In the meantime, we stay on alert and we give Almighty God thanks and praise for all the blessings He has given to us amidst all the vicissitudes of life. This is not a time for lamentation. This is a time for us to draw on our inner strength and our resilience and help one another.

“It has been a challenging year. As Professor Robertson said, we have been able to deal with COVID well, we have the Soufriere volcano and that also we will, with God’s blessing and His protection, and with all of us working together, I am absolutely sure that we will meet this challenge successfully. Let’s hope for the best and we’re planning for if the worst takes place.”

Gonsalves said that a team from the La Soufriere Monitoring Unit, in Kingstown, went to visually inspect the volcano on Tuesday after increased activity on the weekend.

Robertson told the Vincentian media, on Tuesday, there was an effusive eruption at La Soufriere, which means that magma is coming out of the volcano quietly.

Robertson also stated that a new dome is also growing near to the pre-existing one.

Among decisions that the National Emergency Council made Tuesday evening was the course of action that should be followed to ensure the safety of residence.

The Executive Committee of NEMO — which comprises technical officers form the various government departments, private sectors and the non- governmental organizations — will meet today, Wednesday at 10 a.m. to activate plans to protect lives in the event that the level of seismicity increases and evacuation becomes necessary.

Gonsalves told the media that beginning in November and into December, the Seismic Research Centre had been providing his government with advisories regarding activity at La Soufriere.

Then on Dec. 16, the visual observation by the Soufriere Monitoring Unit suggested marginal changes in the small lake occupying the crater floor and heat and gas

The Prime Minister said that on Monday, Dec. 28, routine observation by the U.S. space agency, NASA, for hotspots across the globe, indicated a hot spot within the crater of La Soufriere.

On Tuesday, additional satellite images indicated an extension of this hot spot.

The prime minister said that the government received reports and a resident of Rose Hall, the highest settlement in St. Vincent, indicated that they were greyish-white emission seen above the general area of the crater.

When the team from the seismic monitoring unit visited the crater on Tuesday, in addition to the presence of a new dome to the southeast of the existing one, they observed strong gas emission and that the small crater lake was virtually gone, having evaporated as steam.

“With this increasing activity, we have moved the alert level to orange. When there is no activity, it is green with some restlessness, it is at yellow,” Gonsalves said, referring to the four-colour system, which has red as the highest.

“But now that there is an effusive, oozing eruption taking place, we have to take the alert level to orange. This means that there is a higher elevated activity of heat and gas, called fumarolic activity at the volcano with the strong sulphur smell.”

NEMO said on Facebook that the orange alert means there is a highly elevated level of seismicity or fumarolic activity or both and that eruptions may occur with less than 24 hours notice.

“As Dr. Robertson said, the good thing is if it simply oozes, in other words, let off its steam in the crater itself,” the prime minister said.

2 replies on “Hope for the best, plan for the worst — PM”