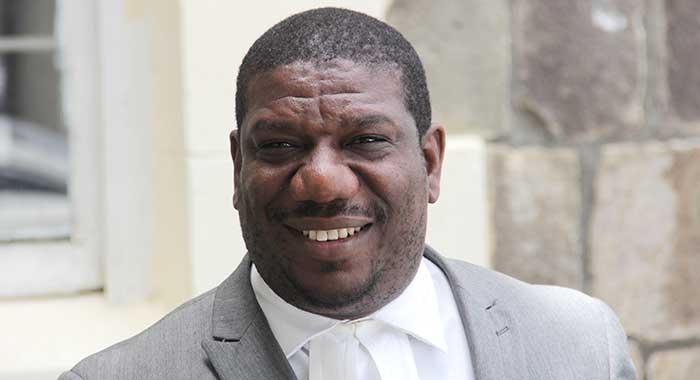 A lawyer has told the court that the actions of health workers in a case in which he is involved constitute a breach of their confidentiality obligation to his client.

Israel Bruce made the case at the Kingstown Magistrate’s Court on Dec. 22, as he argued that Jeyandra Jackson, 24, of Lowmans Windward, did not have a case to answer regarding the breach of quarantine charge brought against her.

Jackson has admitted to attending a political rally of the ruling Unity Labour Party on a day that health officials said she should have been in quarantine.

She has, however, denied ever being given an order to quarantine herself at home for nine additional days, following the five she spent at a hotel, in keeping with the COVID-19 protocols.

None of the witnesses for the Crown has produced any evidence that such an order was given to Jackson, as they claim.

Senior Magistrate Rickie Burnett will give his ruling on Jan. 5.

However, during the trial, the court heard that a nurse had told a receptionist at the hotel where Jackson had spent five days in mandatory quarantine, that the woman was negative and could, therefore, go home.

Bruce, who is also an opposition senator, said he would not use the courtroom to address certain things, “save and except to say it is a gross violation of the confidentiality between the health workers and my client.

“And it impliedly breached the confidentiality of other persons. And I will say this in passing: imagine if six persons are there for quarantine and the receptionist tells four of them they can go, she had impliedly said to those four that those other two have COVID and they have to stay, or something is wrong with them. It is a violation and I am saying that it could be addressed within our system.”

Bruce said the other procedural issue that creates a monumental hurdle in the case is that the Crown is saying it gave Jackson an order to quarantine herself but has no way of proving this.

“You see, had the Crown presented a document in which the name was inserted, and a space makes provision for the recipients to sign as proof that he or she received this document in duplicate form, then the Crown could have that document and say, here it is, she signed it. And it is evidence that she signed to receive this order, she cannot now say that she didn’t know.

“The problem for us, in the health care [system] with this approach is that every person can then slice and dice that order, even if it is completed and handed to them, can then say you never gave one to me. And it is a monumental flaw in the system that must be addressed going forward. I am saying that in passing. It is not a legal issue. I am just saying that in passing.”

“But go home and interact with 20 people there living in your house, and they can [, in turn,] then go out and interact with the rest of St. Vincent and the Grenadines and that is fine, but just that you don’t go out.

“So you can go home, give what you have to them, they can then leave home and give it to the rest of St. Vincent and that’s not a problem.

“That is a loophole in our system that must be addressed and I am saying in passing to address the gaping holes in our quarantine procedure so that the people out there who should be listening will hear and will listen.”

He said the fundamental point was that Jackson received a message saying she was OK and could go home.

Bruce said there is no reason why his client should be further bothered by the case.

“The people who should be bothered are the people in our health care system who need to go and tighten the screws procedurally and make sure they protect St. Vincent and the Grenadines,” he told the court.