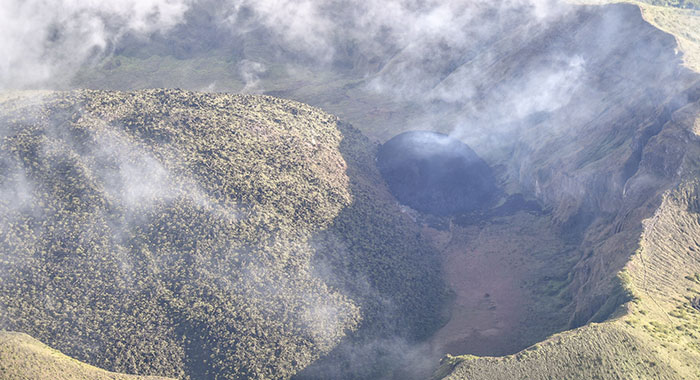 The crater of La Soufriere, showing the new dome, to the right. (Photo: NEMO/Facebook)

One of the scientists monitoring St. Vincent’s La Soufriere volcano, which began erupting effusively on Tuesday, says residents of the island should remain on high alert, but not get panicky about the situation.

“… in summary, you may have to remain at a high [alert] level for a long time. You need to keep listening out, you don’t have to get overly concerned … What you need to do is that if the volcano goes explosive, essentially, we need to move off the mountain for a certain period of time until it gets rid of all that explosion. And then at some point, you may be able to come back,” Richard Robertson, a geologist said on NBC Radio on Saturday.

Robertson, who is originally from North Leeward, is among a team of specialists from the Seismic Research Unit at the University of the West Indies, in Trinidad, that has been dispatched to St. Vincent to help to monitor La Soufriere.

“Good or bad, the effusive part in Soufriere has often gone on for longer than the explosive part. So it may go on for a little while and so people need to sort of be prepared for a longer haul — a few weeks, at least, of this going on and, therefore, being at a high level of alert. But don’t get complacent, don’t get overly panicky about the situation but just be prepared that you may have to move or you may not.”

Emergency management officials have been using aircraft to monitor the growth of a new dome, which was discovered last Tuesday in the volcano that last erupted in 1979.

The 1979 event — an explosive eruption that took place on April 13, Good Friday — is said to have resulted in the evacuation of 20,000 persons from North Leeward and North Windward.

No lives were lost as a consequence of the eruption, which saw thousands of persons spending months in evacuation camps set up mainly in schools and other public buildings.

On Saturday, in its “La Soufriere Bulletin # 5” the National Emergency Management Organisation (NEMO) said that no aerial reconnaissance was done on that day as a result of the high wind advisory in effect for St. Vincent and the Grenadines.

NEMO said that Robertson and his team, however, continued work to upgrade the volcano monitoring system.

A webcam monitoring system was installed at Rose Hall to constantly monitor the summit of the volcano. A data centre was also established at the observatory at Belmont to analyse the data collected from the volcano.

The team also conducted an alternate site exploration at Fancy and other areas to identify new sites where equipment would be installed.

Robertson told NBC Radio that his team is in St. Vincent mainly to augment the monitoring system by installing more monitoring stations.

“Because once you’re at the stage of something happening like it’s happening … it’s important to put in a lot more seismic stations, GPS stations,” he said, adding that there are other kinds of monitoring stations and his team brought quite a bit of kits.

“And we’ve been going out, preparing, recceing (doing recognisance at) sites,” he said, adding that a new site had been installed in Georgetown on Friday — New Year’s Day.

New dome may begin to glow

“But while we are doing that, of course, we are part of a larger team that is both consisting of scientists based in Trinidad and also in Montserrat. We have a large group as well working in NEMO. And so we’ve been collecting information.”

Robertson, who is a professor of geology at UWI, said that the team has been using information from NEMO’s observation flights to come up with estimates of how the dome is growing and basic estimates of its rate of growth.

The information collected so far has shown that there is a new dome growing next to the 1979 dome, located inside the huge crater at the 4,048 foot-high volcano.

“… the growth of the small dome has continued. It seems that it started out at a particular rate, and it’s slightly increased over the days since it started,” Robertson said.

“The growth; it’s still focused in the same area, just west of … the ’79 dome. And it’s essentially expanding a little bit further moving towards the west… And it’s basically doing what we expect… In summary, growth continues; it’s gotten a bit bigger. It’s speeded up slightly. Again, that’s expected.”

Robertson said that the new equipment installed would help scientists to determine the implication of the rate of growth of the dome for persons living in the areas surrounding the volcano.

“And also see if it gives any indication that’s moving from just infusion to explosive,” he said.

“Once effusion starts at Soufriere, it can continue for several weeks, months and … in the case of this 71-72 dome, it went down to a little over a year,” he said, referring to the effusive eruption 50 years ago.

He said even if the volcano does not erupt explosively, effusion could continue to the point where the new dome gets so big that “it perhaps gets to the crater wall”.

The geologist further informed the public that the new dome may begin to glow.

“… people need to bear in mind the black rock that you see there, as you fly over in the day, or you see in pictures, that black rock is what we call incandescent. It glows in the night. So as the dome gets bigger, it’s possible that you will see a little bit of that glow from surrounding areas. And again, that is expected.”

Robertson said that volcanoes are masses of material that has a lot of gas, crystals and fine particles in them.

Magma can escape from a volcano in two ways, Robertson explained.

“If you squeeze a [tube of] toothpaste and it oozes out — that’s kind of effusion, while explosive is if you had a fizzy bottle of say, Coke, and you shook it and you opened a bottle, the Coke just pelts out, right? That’s more explosive.

“So effusive eruptions are ones in which because of the … material properties of the magma itself, and particularly because of the amount of gas it has in it and whether the gases are being allowed to come out quietly; it oozes out.”

He said the classic example of effusive eruptions is of those seen in Hawaii, where there is the long red lava flow.

“Now because of the fact that the properties of the magma of our volcano is such that it’s more what we call sticky, it doesn’t flow like the Hawaiian lava. What it does is it comes out in a blocky way, but the kind of eruption is still effusive,” Robertson said.

“… in the case of our volcano, because of the fact that we have a huge crater, it’s confined and the dangers are confined to the crater itself. So, as much as effusion goes on and as much as it stays within the confines of the crater, that’s probably a good thing because it then means the main dangers are to the top of the volcano and to people visiting the volcano itself.”

The geologist said that in the case of an explosive eruption, “the properties in the magma, particularly because it has a lot of gases and the gas is not able to come out quietly, it gets trapped in the rock and then the gas, as it gets close to the surface, it expands and it breaks up the rock.

“Basically, it breaks up the magma, makes it into smaller pieces, and it fires it up into the air as ash then it collapses on itself, it comes down the mountainside as these flowing avalanches of basically ash and lots of rocks — what we call flows. And that explosive eruption is much more dangerous because then it carries dangerous materials from the volcano further away — down the flank to the volcano to areas lower down the volcano.”

He said that ash from La Soufriere could get as far as Barbados, located 111 miles east of St. Vincent, at the closest point.

“And the flows that go down the mountainside would get to the coastline, so it makes them more dangerous.”

‘I don’t have good news’

Robertson said he did not have good news for Vincentians because given the history of La Soufriere and how it behaved in previous eruptions, an effusive eruption could go on for several weeks or months.

“… why we have to remain at the heightened state, which is getting ready for if it goes explosive is because of that — it can go from effusive to explosive in a very short time. And we are very uncertain of how long that time is.”

He said that his team is monitoring to give authorities as much time as possible, should an evacuation order be necessary.

“But because we can’t guarantee that, people need to listen to the radio, listen to the authoritative sources, … being prepared, … not necessarily people in the south so much but the people on the volcano, be prepared that if it moves from effusive and if it gives any sign that it is being explosive, that you may have to move.”

NEMO said on Saturday that the alert level remains at orange – the second highest on the four-colour chart, which red, being the highest.

With an orange alert, residents north of Belle Isle and Georgetown have to be prepared to evacuate at a moment’s notice, as an explosive eruption could occur within 24 hours.

NEMO, however, reminded the public that no evacuation order has been issued.

The emergency management agency said that the volcano, on Saturday, continued to discharge magma and steam was observed from the Belmont Observatory.

“Persons living in areas close to the volcano should expect strong sulphur smells for several days to weeks, depending on changes in wind direction,” NEMO said

Volcano until the scientists advise that it is safe to do so. NEMO will continue to provide regular updates on all activities taking place at La Soufriere,” Saturday’s bulletin said.