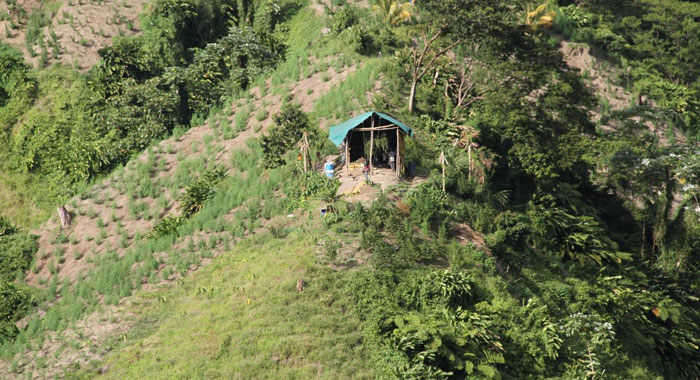 In this Feb. 21, 2017 iWN photo, marijuana cultivation is seen on the slopes of La Soufriere volcano in St. VIncent.

Vincentian ganja farmers are asking for the security of the crops amidst an order by the authorities not to visit the La Soufriere volcano, which is in an effusive eruption phase.

In a press statement on Monday, president of the Cannabis Revival Committee (CRC), Junior “Spirit” Cottle, noted that in St. Vincent and the Grenadines, cannabis is grown mainly on the mountains surrounding La Soufriere.

He said that as a result of the effusive eruption, which was announced last Tuesday, cannabis growers have been asked, for their own safety, to vacate the areas surrounding the volcano.

Cottle said that in doing so, farmers are leaving unattended “thousands of dollars worth of produce in which they have invested, following the passage of an amnesty law, which makes it legal for them to grow their ganja and to sell it to licensed purchasers”.

“It is as if we have been struck with a double dose of poison. First, it was COVID. Everybody else get some kind of stimulus, except the ganja man and his family.”

“Interestingly, traditional growers welcomed the amnesty because they see it as an opportunity to transition from their illicit and unsustainable economic activities to more stable and sustainable ways. They have gone the extra mile by crediting and borrowing monies from friends and relatives for this venture.

“Suddenly, up comes the volcano, impacting upon them more than anyone else.”

He said that the CRC is, therefore, calling on the government, and also, the parliamentary opposition, and concerned Vincentians for their support, “to allow traditional cultivators to move their stored cannabis to more secured and safer grounds, without it being seized by the police, bearing in mind, the nature of the amnesty, as well as growers livelihood

“You can’t allow us to grow, reap it, and then seize it,” Cottle said.