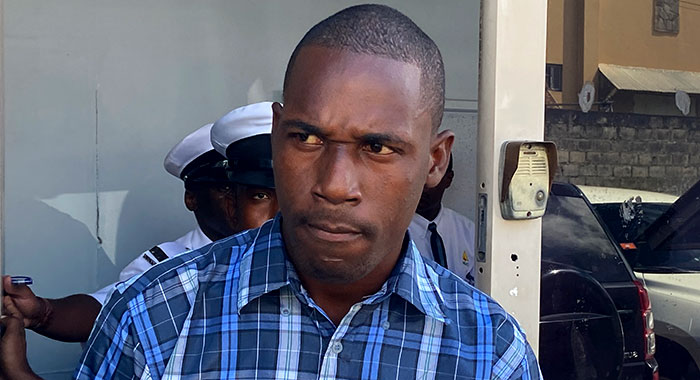 A Sandy Bay man may by now have fully appreciated the seriousness of a bond to keep the peace, after beaching the bond by committing theft.

At the Kingstown Magistrate’s Court on Dec. 28, 2020, Shaffique Williams was ordered to pay the court EC$1,500 forthwith for breaching a bond imposed in June or go to prison for six months.

However, that was not the end of his troubles, as he was jailed for theft.

Also joining him in the dock was Danrick Quashie, 19, of Georgetown, who pleaded guilty to a charge that Dec. 25, at Georgetown, knowing or believing that one gold S7 cellular phone to be stolen goods, he dishonestly received it for his own benefit.

However, Quashie’s guilty plea was vacated and a trial ordered after the court heard the facts and the man’s explanation of what had happened.

The facts of the case are that Lawrence went to bed about 11:40 on Christmas night and placed her phone at the edge of the bed.

She left her bedroom window open as she slept.

When Lawrence woke up about 2:20 a.m., she found that the phone was missing.

She checked with persons in the house, but the device was not found.

Later that morning, Lawrence went to work and while in Colonarie, she informed persons there that her phone was missing.

Lawrence knew Williams and suspected him to have been involved in the disappearance of the phone.

She saw him later that day and when Williams appeared to have seen Lawrence, he ran.

Lawrence reported the matter to the Colonarie Police Station.

Police took Williams into custody as part of their investigation, and he told officers that he went to Lawrence’s house, saw her sleeping and pushed his hand through a window and took the phone.

He further told officers that he had walked part of the way to Georgetown, where he met Quashie and gave him the device to swipe.

Quashie handed over the phone to police and when it was checked, officers found that it was not working.

It was determined that some of the programmes on the device were damaged during the attempts to swipe it.

After the facts in the case were read, the court was informed that Williams was on a bond that had been imposed by the Serious Offences Court.

“So right away, I am calling on you to pay $1,500 or go to prison for six months,” Burnett told Williams.

The senior magistrate noted that Williams had been bonded for burglary with intent and criminal intent.

“Sorry, I won’t do it again,” the defendant said.

“You are a candidate for prison,” Burnett said. “Look at what you have done. The woman was sleeping, you took her phone and within minutes, you took it to someone to swipe it.”

Williams told the court that he would pay back for the device.

“That’s what you all do, take things and say you will pay for it. I am of the view that you should take a stint in prison and reflect on what you did.”

The magistrate told Williams that Parliament has prescribed a maximum sentence of 14 years for burglary.

“If I am to interpret the legislation as parliament prescribes, you will be going for 14 years, but the court has been interpreting it in a particular way,” he said.

He asked Williams if he had been to prison before and the defendant said, “No.”

“Time to take you away from Colonarie for a while,” the senior magistrate said and Williams said that his mother would pay the bond amount.

Burnett, however, told him that he would be going to prison whether or not the bond is paid, as a custodial sentence was in the offing for the Christmas Day crime.

The defendant told the court that he had a job, but the magistrate told him that if he had considered his job he would not have committed the crime.

In addition to activating the bond, the magistrate jailed Williams for nine months for theft of the phone.