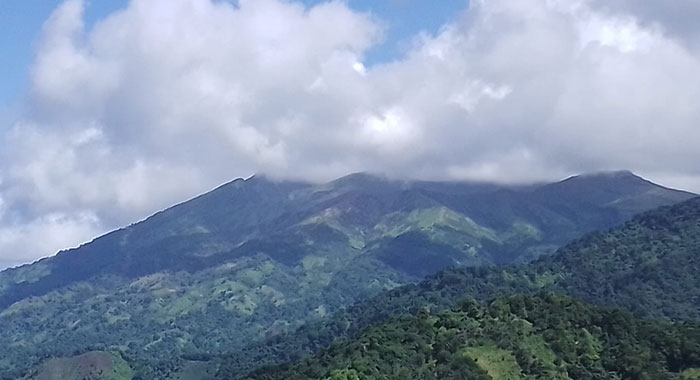 A French helicopter will today, Wednesday, assist with surveillance flights to monitor the La Soufriere Volcano, which is in an effusive stage of eruption.

The National Emergency Management Organisation (NEMO), in its bulletin on Tuesday, said that the aircraft was procured through an arrangement between the governments of St. Vincent and the Grenadines and France, through the Embassy of France to Barbados and the OECS, located in St. Lucia.

The Regional Security System (RSS) aircraft, a fixed-wing aircraft, will also do a surveillance of the volcano today, NEMO said.

Aerial reconnaissance of La Soufriere was done on Tuesday, however thick cloud cover was blocking the view of the new dome.

Also on Tuesday, the team from The Seismic Research Centre, University of the West Indies, in Trinidad (UWI-SRC) led by Vincentian geologist Professor Richard Robertson installed a monitoring station at Wallibou.

They made a trip to the crater rim of the volcano, to take still photos and videos, which will allow them to estimate the volume of material extruded and growth of the new dome.

“Based on observations today, the dome is slowly getting bigger,” NEMO said.

NEMO said that the alert level remains at Orange — the second highest on the four colour scale, with red being the highest.

The volcano continues to exude magma on the surface and steam can still be observed from the Belmont Observatory.

“Persons living in areas close to the volcano should expect strong sulphur smells for several days to weeks, depending on changes in wind direction.”

NEMO held three community meetings on Tuesday with residents of Fancy, Owia, Point and Calliaqua to provide an update on the present situation at the volcano and reviewed the community volcano emergency plans.

In addition, residents of Calliaqua were also briefed on their roles as it relates to receiving persons who will be evacuated, if it becomes necessary.

There will also be a meeting with residents of Sandy Bay and surrounding communities on Thursday at 3 p.m. at the Sandy Bay Government School to update residents on the present situation at the volcano and to review the community volcano emergency plan.

On Saturday, NEMO will hold a similar meet with residents of Georgetown and surrounding areas at the Georgetown Secondary School at 3 p.m..

“The National Emergency Management Organisation is reminding the public that no evacuation order or notice has been issued. NEMO continues to appeal to the public to desist from visiting the La Soufriere Volcano until the scientists advise that it is safe to do so,” NEMO said.

NEMO said it will continue to provide regular updates on all activities taking place at La Soufriere.