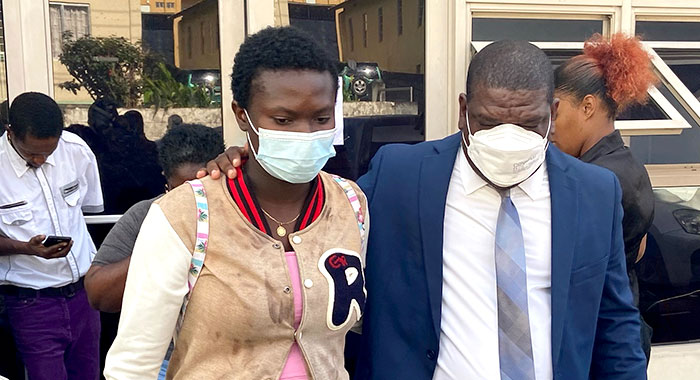 The defendant, Jeyandra Jackson, left, and her lawyer, Israel Bruce, after she was freed on Tuesday. (iWN photo)

The prosecution has lost the first COVID-19 quarantine breach case that went to trial in St. Vincent and the Grenadines.

On Tuesday, at the Kingstown Magistrate’s Court, Senior Magistrate Rickie Burnett upheld a no case submission that defence counsel Israel Bruce made on Dec. 22, 2020, on behalf of his client Jeyandra Jackson, 24.

Crown Counsel Shackell Bobb told the court that the Crown would appeal the decision.

Jackson was charged that on Oct. 27, 2020, at North Union, in St. Vincent and the Grenadines and within the second magisterial district, she contravened an order made by Dr. Roger Duncan, health officer, under section 27(a) of the Public Health Act, requiring her to quarantine herself from other persons.

She initially pleaded guilty to the charge when she was arraigned at the Kingstown Magistrate’s Court on Oct. 23, but changed her plea to not guilty after hearing the facts.

However, at the end of the prosecution’s case on Dec. 22, Bruce made a no case submission on behalf of his client, and Bobb, who represented the Crown, responded to it.

Burnett had reserved his ruling to Tuesday.

In handing down his ruling, the magistrate pointed out that with every case that comes before the court, the law and rules of evidence remain the same.

“So it cannot be that because COVID-19 is a pandemic that somehow the court should adjust to respond to the pandemic,” he said.

“Now, the court recognises that COVID-19 is a relatively new virus. But if you are going to prosecute persons for breaching an order, you have to realise that you must satisfy a court … not the Ministry of Health,” the magistrate said.

Burnett said the order of Dr. Roger Duncan was “fundamentally flawed, in my view”.

He said that the prosecution was unable to produce a copy of the order that was issued to Jackson, if it was issued at all.

“At one point, the good doctor was going to show me something on his phone. With the greatest of respect, there is a proper way to lead evidence to the court,” he said, referring to a development as Duncan testified in the case.

Burnett ruled that the prosecution’s duty, in the end, is to prove its case beyond reasonable doubt.

“However, at this stage, the question I have to address my mind to is whether a prima facie case has been made out. In answering that question, I have to look at the totality of the evidence of the prosecution at this stage…”

He said that having addressed his mind to the legal test at a no case submission stage, he was of the view that the Crown’s case, taken at its highest, was such that a jury properly directed could not properly convict Jackson.

“The law says once a court comes to that conclusion, it is the duty of the magistrate on a no case submission to stop the case. If I am to do so, I am not doing a favour to anyone. I am doing what the law says must be done,” Burnett said.

“As a magistrate, I do not make recommendations. That is not my job. But I am sure that counsel for the prosecution would address those gaping holes with the relevant authorities.

“And I end by saying that this is a court of law. I rule that there is no case for the accused person to answer,” he said and told Jackson she could leave.

Burnett had, earlier in his ruling, examined the legal principles governing no case submissions.

He then noted that Bruce had submitted that there was no evidence to substantiate the case against Jackson and it was the duty of the prosecution to prove that Jackson had breached an order of the court.

Burnett, however, said that he preferred to call the order a medical officer’s order.

He noted that Bruce had submitted that the Crown’s case must be supported by cogent and quality evidence and that the lawyer had attacked the medical officer’s order and pointed to all of the flaws in it.

“What did she breach?” Bruce had asked, submitting that there were “gaping hopes” in the prosecution’s case.

Bruce had argued that the court should use the established legal principles and stop the case.

On the other hand, Bobb had argued that the evidence presented had substantiated a prima facie case and that the crown had presented enough evidence to cross the no case hurdle.

At her arraignment in November, Jackson had maintained that while she went to a Unity Labour Party rally on Oct. 27, a day that health authorities said she should have been in quarantine, no one had told her that she had to do, at home, nine days’ quarantine in addition to the five she had spent at a hotel.

At the end of his no case submission in December, Bruce had told the court that the trial had identified major loopholes in the nation’s quarantine procedures that should be addressed.