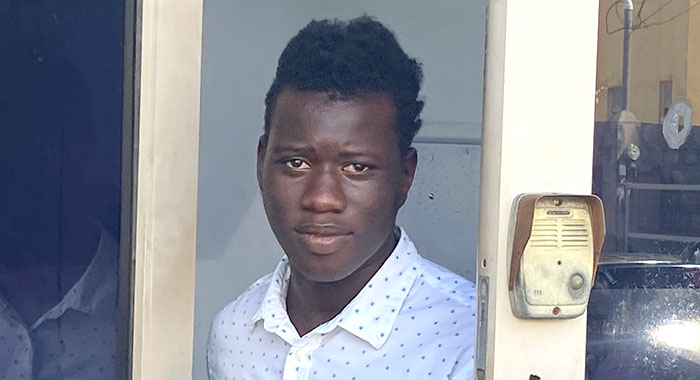 A 19-year-old man who pelted another man with stones in a dispute over a woman will have to keep the peace for the next six months, if he wants to avoid paying an EC$1,500 bond or spend six months in jail.

On Dec. 28, 2020, at the Kingstown Magistrate’s Court, Romano Jacobs, of Lowmans Windward, enthusiastically pleaded guilty to three charges brought against him in relation to the incident.

He pleaded guilty to damaging one yellow and blue spray can, valued at EC$550, the property of Shirna Jacobs; assaulting McNeil Williams of Lowmans Windward causing actual bodily harm and throwing missiles to the danger of Williams.

By the time the magistrate was halfway through reading the second charge, Jacobs told the court that he was guilty of all the charges, telling the magistrate that there are three.

Prosecutor acting Corporal of Police Corlene Samuel, in presenting the facts, told the court that Williams knows Jacobs very well but they are not on speaking terms because they are both intimately involved with the same woman.

On Dec. 13, about 12:15 p.m., Williams was walking along the Lauders public road and had a spray can belonging to Shirna Jacobs.

When Williams reached Jacobs’s home, Jacobs picked up a stone and pelted it at him.

The stone struck the spray can, resulting in damage to it.

Jacobs continued to pelt Williams with stones, telling him, “I will knock you down today.”

Williams had to hustle out of the area to escape Jacobs. However, one of the stones struck him, resulting in an injury to and swelling to his back.

The matter was reported to the Biabou Police Station and Jacobs gave a statement admitting to the offences.

In mitigation, Jacobs, who told the court that he had just turned 19, said that all three of the parties involved in the matter are from Lowmans Windward.

“Me and de girl been dey first and he tek the girl from me and breed the girl,” Jacobs told the court.

He said that the man, however, was not treating the woman well and, therefore, she returned to him.

Jacobs said he pelted Williams with stones because Williams had stabbed him and then had the heart to walk past his gate.

The magistrate, however, said that if Williams had injured Jacobs, as he claimed, Jacobs had chosen not to report the matter to the police.

The defendant said he did not go to the police because he did not want it to appear that he and Williams were fighting for a woman.

“He ah treat the girl bad so you know once a girl get somebody who could protect her–” he said, telling the court that he is that person.

He said that Williams beats the woman and that is why she returned to him.

The defendant volunteered to the court that he had been to prison before for burglary and handling stolen goods.

“And me end up learn the trade so it go mek ah two years me far from prison,” he said, referring to the “Grow In Time” programme that teaches prisoners to make items from vetiver grass.

“As you could see me nah come yah for no burglary or nutt’n because me change,” Jacobs said.

The magistrate, however, told him that he sounds like a very experienced man, a statement that resulted in some sniggering in the courtroom.

Lawyer Paula David, who was at the bar table, but not involved in the matter, stood and told the court that the defendant had not wasted the court’s time and had been very forthright.

She said that the defendant is extremely intelligent and needs to learn self-control.

“Your life could be bright. You are a bright boy,” she told the defendant and asked him why he would get involved with the law over a woman.

The magistrate said that while that might be true, “there is a special girl”.

“Plenty special girl out there,” the lawyer said, and went out to emphasise that Jacobs had not wasted the court’s time and had been forthright and should get credit for that.

“I am sure that you did not fight no man over no girl,” the lawyer responded, triggering laughter.

The magistrate decided to place Jackson on a bond then asked him if he understood the ruling.

Jacobs explained the sentence to the court and said he is now focused on his music business and is on a different level and would, therefore, not break the bond.