Glow at Volcano is not an explosive eruption – scientist

Expert says glow natural and expected; no need to evacuate 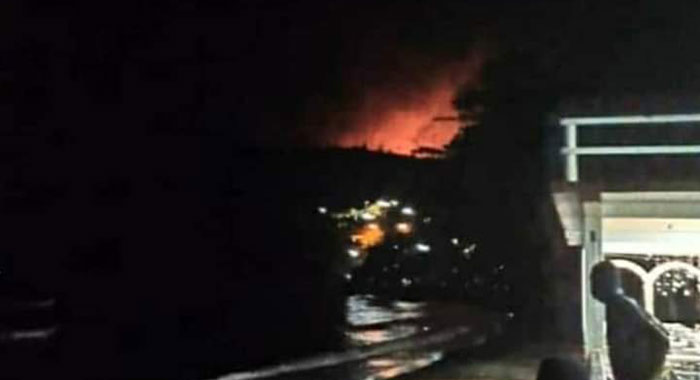 Officials say the glow is natural and there is no need to panic or evacuate.

The National Emergency Management Organisation (NEMO) said, late Saturday night, that there was no explosive eruption of La Soufriere.

Residents of North Leeward have reported seeing “fire” at the volcano, which has been erupting effusively since late December.

“The magma continues to flow out of the crater, so that is a normal part of an effusive eruption,” Director of NEMO Michelle Forbes said on NBC Radio around 10:40 p.m.

“We are asking persons to remain calm. There is no explosive eruption at the moment. There is no evacuation order for anywhere above the Dry River or any community in St. Vincent and the Grenadines at this moment.” Forbes said.

“That is a normal part of an effusive eruption,” she said, noting that Professor Richard Robertson, a geologist from the Seismic Research Centre in Trinidad which is monitoring the volcano, had spoken about this glow weeks ago.

And, in a separate call to NBC Radio Saturday night, Robertson, who is originally from Rose Hall, urged the public to remain calm, saying the glow at the volcano is expected.

As a result of the effusive eruption, a second dome is growing inside the volcano alongside the one that resulted from the explosive eruption of 1979.

“As the dome gets bigger — and it has gotten bigger — people will begin, on the western flanks, especially in Chateaubelair, will begin to see what we call in volcanology, incandescence or glowing of the dome,” Robertson said.

He said it is difficult to see the glow during the day because of the brightness of the sun, but it is visible at night.

“You hadn’t seen it so far because it was below the rim. But as the mountain (the new dome) inside gets closer and closer to the [rim of the volcano] you begin to see more of the glow,” Robertson said.

“Eventually, when it gets high enough, they are going to actually see the mountain (dome) itself. And I will like to prepare them for the fact that as it gets bigger, you are gonna see the glow more.”

He said one way in which the dome grows is by pushing out material at the outer flanks of the volcano.

The material, in turn, spills off.

He said this results in rock falls and during the day, persons will see dust as the rock falls.

“But if you see it in the night, it looks like rivers of red, fiery material, because, again, it is hot material and it glows in the night, because there is no sun.  So the dome is glowing. It is not erupting explosively. It is glowing as it has been doing since it first came out but it is just that people couldn’t see it.”

“It is natural; it is what is expected,” Robertson said.

He said residents of the country should continue with their lives, as they have been doing since the effusive eruption was made public.

“We have been monitoring it. We have been showing you pictures. It’s doing what it has been doing for the last few weeks. It hasn’t fundamentally changed,” he said of the volcano, which is 4,048 feet high.