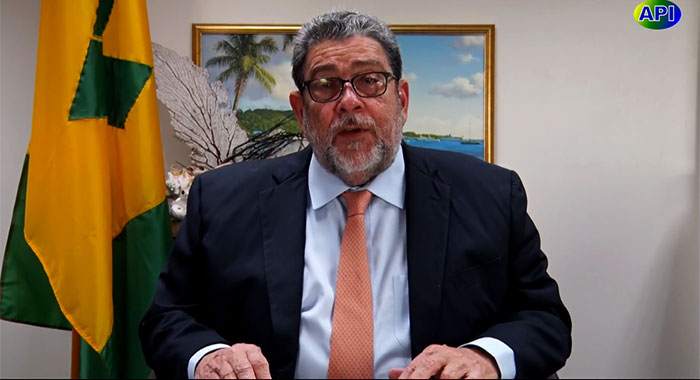 Prime Minister Ralph Gonsalves, on Monday, again rejected the imposition of curfews, states of emergencies, and outright lockdown measures in response to the COVID-19 pandemic.

He, however, announced public holidays this coming Friday and Monday, saying the strain of the pandemic and of the ongoing effusive eruption of the La Soufriere volcano is beginning to show on the faces of citizens.

“… we perhaps need as a people to pause, to reflect, to act more assuredly in ways which are inclusive, in solidarity with each other, and to be engaged fully for the long haul ahead.

“These words,  ‘pause’, ‘reflect’, ‘act’, ‘inclusive’, ‘solidarity’ and ‘engagement’, incidentally constitute an uplifting acronym  ‘praise’. That is a golden watch word,” the prime minister said in a national address.

Since Dec. 28, the number of COVID-19 cases recorded in St. Vincent and the Grenadines has increased about five-fold, reaching 494 on Monday.

Of those, 359 cases were detected among residents with no recent travel history, two of whom – 49-year-old Justina Pompey, and an 80-year-old man, whose name has not been released, have died after contracting COVID-19.

Both persons are said to have had pre-existing conditions.

On Friday, the World Health Organisation changed SVG’s COVID-19 status, saying the country was having community transmission of the illness.

However, the government said on Monday that it had objected to this classification, triggering a reversal by the world health governing body.

In his national address, Gonsalves said that experiences in other CARICOM nations and globally suggest that states of emergencies, curfews and total lockdowns have not been nearly as effective in stemming the rise or spread of the coronavirus.

“At the same time, real damage has been caused to lives and livelihoods by draconian measures, tight-as-a-drum lockdowns, or night time curfews,” he said.

The prime minister said that other experiences elsewhere, including SVG, have shown that “nuanced and targeted restrictions and regulations are no less effective”.

“But these nuanced and targeted restrictions and regulations must be properly policed,” said Gonsalves, who is also Minister of National Security.

“So our government will not, at this time, even with a spike, order any state of emergency, lockdown or curfew,” he said.

The prime minister, however, said that current restrictions and regulations will be tightened and managed more closely and, where necessary and desirable, his government will ramp up the restrictions and controls.

The prime minister noted the measures currently in place to help to prevent and reduce the spread of the viral illness.

These include the ban on music in public places and places to which the public has access, limiting indoors gathering to 10 persons and outdoor gathering to 20, and a reduction of persons on public transportation.

“These restrictions and regulations will remain in place for the time being and they are being given more time to have the requisite effect. Until advised otherwise by the Health Services Subcommittee of NEMO (the National Emergency Management Organisation).

Further, there will be tighter policing of the quarantines, the bans on the playing of amplified music, the size of mass gatherings particularly at places of entertainment and leisure, restaurants and on public transportation vehicles.

The prime minister said that the existing legal framework under the Public Health Act, the Police Act and various other pieces of legislation concerning public order, public safety, road traffic, immigration, are adequate for the task at hand.

“I’m asking the public to be very responsible in paying attention and acting in accordance with all the protocols outlined by the health authorities.”

Gonsalves said Air Canada’s suspension of its flight to St. Vincent until April 11 will aid in the restriction of movement of some persons at this time.

He noted to public servants and public enterprises that the staff rotation that is in effect is designed not only to keep them from work, but also to require them, as far as reasonably practicable, to stay in their home bubble.

“It is in everybody’s health interest at this particular time of the increased spread of COVID-19 that we limit unnecessary and risky movement or gathering of persons so as to cut down on the extent of the transmission of the virus,” the prime minister said.

“Let us all embrace this proposition and act sensible accordingly. Remember, always, no one is truly safe until everyone is safe.”

Gonsalves noted that for Easter 2020, Vincentians acted responsibly and in a disciplined way by staying off the road and participating in virtual church services and avoiding events traditionally held to observe the festival.

He said this was the case on the August weekend when citizens enjoyed two holidays at home as a replacement for Carnival Monday and Tuesday.

“Perhaps, it’s an appropriate time to do so again. I sense that across our nation, the faces of men and women are strained and anxious about the increase in the local COVID cases, the effusive oozing eruption of La Soufriere, the socio-economic challenges ahead this year and the uncertainties and the unknowns before us.

“To be sure, this anxiety among our people is mixed with a resolve that our faith, our indomitable spirit will see us through, successfully [through]these awesome challenges,” Gonsalves said and went on to speak about “PRAISE”.

He said that frontline workers in public health, education, the police, immigration, and elsewhere who have been bearing the brunt of carrying the fight against COVID-19 “need also to pause, to refresh and to reflect in order for them to be assisted in doing their work optimally, in accordance with their mandates.

“These capeless heroes, as Jamesy P calls them, have been holding the faith, to use the formulation of the musical rendition by Rodney Small, Darron Andrews and Hance John, he said, referring to Vincentian artistes who have produced inspirational pieces during the pandemic.

“These frontline workers need a less-pressured respite.  Perhaps, our religious leaders may come together to have us embrace more enduring God’s amazing Grace which has brought us safe thus far and we believe this very grace will lead us home in joy and peace.”

Gonsalves said that the holidays on Friday and Monday are “for public health”.

“In this coming weekend, Friday to Monday, we will stay at home, stay away from the beaches or mass gatherings or places of entertainment, or leisure. Let’s reduce the extent of the movement of people these days. I urge businesses to approach Saturday, the 23rd as if it were also a usual bank holiday.”

The prime minister said that he expected the traffickers in agricultural produce to Trinidad would still export their commodities on Friday.

“They will do so as this export, in the circumstances, is a veritable essential service,” he said, adding that the Ministry of Agriculture will make the requisite announcements,” Gonsalves said.

He reminded the public that the protocols of the NEMO’s Health Services Sub Committee on mask-wearing, hand sanitising, and physical distancing will continue to be highly recommended for consideration by the population and scrupulous application.

He again rejected the call for mask-wearing to be made mandatory with a penal or criminal sanction.

“Our government considered that such an approach at this time to be unwise and counterproductive from the standpoint of the spread of COVID itself and law enforcement,” Gonsalves said.