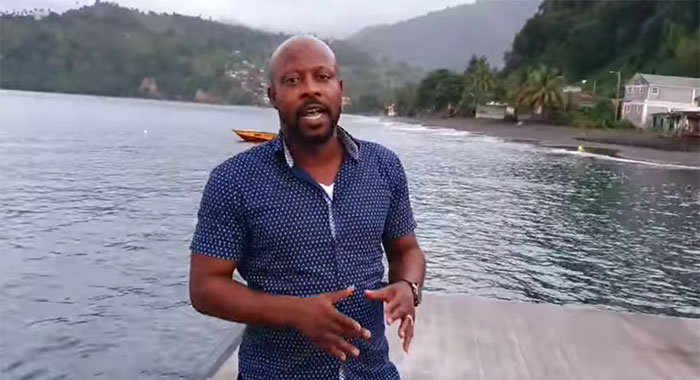 Carlos James at the Chateaubelair wharf in the video published on Sunday.

A resident of Chateaubelair has taken to social media challenging the claims by North Leeward MP Carlos James, that the wharf in the north-western town is complete.

The wharf would replace one that was damaged for years before reconstruction began in June 2019.

Construction had been estimated to last one year but the compound is still fenced and the wharf is noticeably incomplete.

In the face of this, there was some consternation in Chateaubelair and other parts of North Leeward Saturday night amidst rumours that La Soufriere had moved from an effusive to explosive eruption.

iWitness News understands that some residents of the communities closest to the volcano began to prepare to evacuate.

However, the National Emergency Management Organisation (NEMO) said that same night that the glow that was seen above the volcano came from the lava emitted over the last few weeks and not cause of an explosive eruption.

In a Facebook video Sunday morning, Troy Prince, a Chateaubelair resident, said there had been, Saturday night, “a big hurray in relation to the activities that are taking place at the la Soufriere volcano.

“It was a bit of a scare for most of the residents because it is the first that a lot of us are experiencing what we experienced in relation to the glow that we saw, looking over the [town] of Chateaubelair last night.”

Prince said he knows there are a lot of persons who are looking and have a lot to say in relation to how things should be done.

“To all of those guys who are not in tune with what is happening in North Leeward right now in relation to access, to proper infrastructure, which is roads, bridges, wharves, right and access to clear information and how often information is being shared with us, it is best that you keep your mouth shut rather than jumping on social media to run your mouth, bla, bla, bla, to hear what is happening…

“It is one road that we are using right now as the main road in North Leeward and it is not even the main road. It’s a second bypass road that they are using… this road, it is a one-way street.”

But one hour after Prince’s post, a video of James standing on the Chateaubelair wharf appeared on the MP’s personal Facebook page.

“We are here at the Chateaubelair jetty, a $5 million project completed by the government of St. Vincent and the Grenadines,” said James, a lawyer a former journalist and speaker of the House of Assembly.

“I just want to indicate that though we are finishing up the remedial works here, more or less, the jetty has been completed and is ready for use in the event of an evacuation from Chateaubelair in relation to La Soufriere, which is behind me here in Chateaubelair Bay,” he said.

James said that from what he was seeing at the wharf, “the length of this jetty, it can take approximately two large vessels and there is also a smaller ramp to take smaller vessels in relation to fishermen in the area.

“But my mind is clearly on a possible evacuation from North Leeward and this jetty is pretty much ready. I have been given the assurance from the contractor that it is ready, I came for myself to have a look and to see the installations. It is pretty much ready to go,” he said.

‘Is this wharf really completed and ready for use’?

In a second Facebook Live video on Sunday, posted four hours after James’, Prince told viewers he wanted to show them the wharf that James had said was complete and ready to facilitate an evacuation.

Prince showed, on the wharf, piles of steel rods, bended as if for use in construction.

“Now, I want you guys to picture this. Let’s say last night there was really supposed to be an evacuation. Is this wharf really completed and is ready for hundreds of persons who would be scampering through these galvanise gates?” he said from within the construction site, which is fenced with galavanised sheets.

“You take a good look, my people, and tell me if what Carlos did was not misinforming the public. Take a good look at the condition of this wharf that he says is ready for if there is to be an evacuation.”

Some 90 seconds into the video, a woman walks up to Prince and told him that he could not just walk into the area and do what they ‘feel like and criticise the government’.

“I’m sorry but the government needs to be criticised for misinforming the public,” he responds to the woman.

There were also what appeared to be large planks of board on the concrete pier.

“Hundreds of people scampering through these gates last night. Would this have been something that wasn’t disaster?  Take a good look. And Carlos is saying that this wharf is completed.”

However, the woman said, “The wharf ain’t even self done (complete). The people leave it in a way that people could use it in case something happen. It finish?”

Prince told her that the wharf is not safe for people to use, but the woman said it is, in fact, safe.

“It safe enough that if you have an emergency people could get away,” she said and accused Prince of loving to cause confusion and bacchanal.

But Prince continued his broadcast, saying that there were pieces of steel jutting out of the wharf and open manholes in the area.

“You just have to picture people scampering through here,” he said.

“Where they scampering to go?” the woman said, adding, “because the wharf ain’t done.

The video shows open drains close to the entry of the construction site.

“This is not safe for the people of North Leeward. Open manholes.”

But the woman maintained that the wharf “ain’t done but it have road for people to pass”.

But Prince said that the people of North Leeward, “we do not need to pass on such treacherous roads.”

The woman threatened to fetch the police to escort Prince out of the area.

“This thing is a disaster. Yes, I appreciate the efforts that were done by the workers to try and get things in order for an instant evacuation. But look, my people, picture hundreds of people trying to get on top of a vessel.”

He showed viewers steel jutting of an incomplete area of the walk, presumably where a mooring dolphin could be installed.

Seven minutes into the video, the woman returns with a police officer, who asked Prince if the wharf was open.

Prince said that was not the case but he was doing a video to sensitise the public.

“He nah supposed to come here and do no video”, the woman said.

The officer told Prince he is not supposed to be on the wharf and pointed out the boundary to him. Prince exited the construction site and thanked the officer for doing his job.

However, Prince’s exposé did not end there as he exited the site and continued on the main road, pointing out what he saw as the unsafe area around the wharf.

Later, another police officer in plain clothes approached Prince and told him that the area is still a construction site, and pointed out the signs that warn of danger.

He told Prince that he is not to enter the area until told otherwise.

“Please desist from going there. I am not against you doing your live video, but not on the site,” the officer said.

“Now, my people, again, this live is not to create any strife or any malice but I am basically saying, Carlos James, what you shared with us in that video, it is misleading and misinforming,” Price told his viewers.