Police threatens to use law to make face masks mandatory 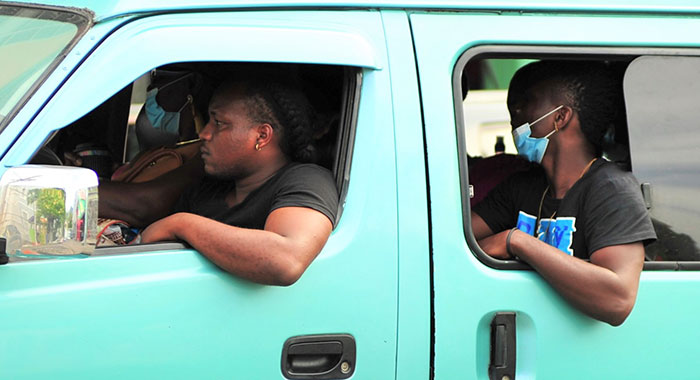 A passenger without a face mask while a conductor wears his incorrectly on board a minibus. (Photo” Robertson S. Henry)

The Royal St. Vincent and the Grenadines Police Force (RSVGPF), on Thursday, cited a pre-existing law, which it says it would use to enforce the wearing of face masks in public.

The statement by the police comes even as Prime Minister Ralph Gonsalves maintained this week that his government is against making the wearing of masks in public mandatory, preferring to build “consensus”.

“The RSVGPF further informs that the police have the power to enforce this piece of legislation and will, if it becomes necessary so to do. Consequently, the RSVGPF strongly encourages all persons to wear a face mask,” the police said in a press statement.

“Any person who unlawfully or negligently does any act which he knows, or has reason to believe, to be likely to cause the spread of any infectious or contagious disease, is guilty of an offence and liable to imprisonment for one year.”

The police statement said that considering this, the RSVGPF “wishes to inform the public that it is a criminal offence to negligently engage in activities that can cause the spread of any infectious or contagious disease in SVG”.

The police statement noted that coronavirus, the virus that causes COVID-19, is highly contagious and very deadly.

It noted that the World Health Organization (WHO) has said that the coronavirus has already killed over two million persons globally, including two persons in SVG.

“In light of this, the RSVGPF strongly encourages all citizens, including omnibus drivers, conductors and passengers to wear a facemask in an effort to reduce the spread of the coronavirus,” the statement said.

‘The RSVGPF has noted that while the vast majority of persons have been wearing a facemask as advised by the authorities, there are those who chose not to; especially some conductors working on public omnibuses,” police stated.

The RSVGPF further commended the citizens of St. Vincent and the Grenadines who have been complying with the COVID-19 protocols that have been implemented by the government to combat and contain the spread of the coronavirus.

The police statement comes as health officials struggle to contain an upsurge in cases of COVID-19 in SVG.

As of Friday, SVG has recorded 865 cases of COVID-19, including 724 local cases — cases detected, since December, among residents with no recent travel history.

Two persons with COVID-19 have died, 220 persons have recovered and 643 cases remain active.

Under the protocols issued by the Ministry of Health in light of the coronavirus pandemic, the wearing of masks in public places is highly recommended.

The government has, however, made it mandatory for its employees while on the job, and for entry to government buildings.

Gonsalves has repeatedly spoken against making wearing face masks in public mandatory, saying that doing so would unnecessarily divert police workers and could even criminalise students.

However, the The Child Justice Act, which was passed in December 2019, could shield persons under the age of 18 from any prosecution.

On Monday, he noted that in London many persons had recently flouted a physical gathering law.

“It was instructive to me and we have to as best as possible build the consensus and use the law not so much as a sword but use it as a shield,” said Gonsalves, who is also minister of justice and national security.

He was speaking while commenting on a large funeral in Barrouallie last Saturday, which contravened the health protocols on mass gathering and the wearing of face masks.

“So even where the police had the authority to stop that procession on Saturday on several pieces of the law, pre-existing, had nothing to do with anything passed for COVID, but I don’t think you needed to use it as a sword,” the prime minister said.