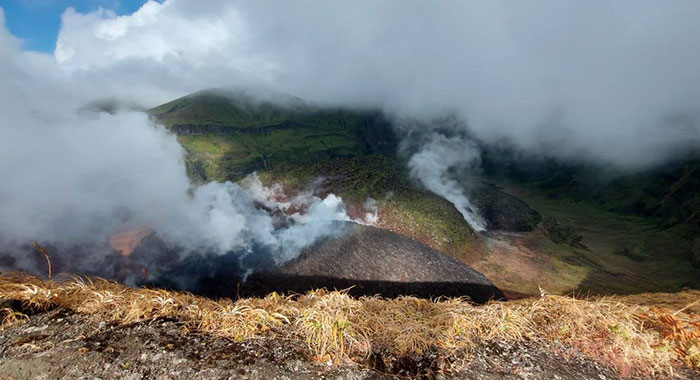 A new team from the University of the West Indies Seismic Research Centre arrived in St. Vincent and the Grenadines, on Wednesday, to take over the monitoring of La Soufriere, which has been erupting effusively since late December.

Thomas Christopher, scientist from the Seismic Research Centre (SRC) based at the Montserrat Volcano Observatory (MVO), will lead this new team, which will continue the work being done on the monitoring network.

On Thursday, the team spent the morning scouting the western flank of the volcano for possible occupation sites for the electronic distance measurement (EDM) campaign to check to see if the crater wall is moving.

The team then spent the afternoon continuing the work to get the Belmont Volcano Observatory ready for 24 -hour monitoring.

Before their departure, Robertson and his team held a briefing session to update the new team on the work completed on the monitoring network and the way forward.

A dome survey last Sunday from the summit of La Soufriere concluded that the total volume of the new lava dome was 4.5 million cubic meters.

Since Dec. 28, the new dome has been growing next to the 1979 dome — when the volcano last erupted explosively.

NEMO says that the alert level remains at orange, meaning that the volcano can erupt within 24 hours.

The volcano continues to exude magma on the surface and steam can still be observed from the Belmont Observatory.

Persons living in areas close to the volcano should expect strong sulphur smells for several days to weeks, depending on changes in wind direction, NEMO said.

NEMO further reminded the public that no evacuation order or notice has been issued.

“NEMO continues to appeal to the public to desist from visiting the La Soufriere Volcano, especially going into the crater, since doing so is extremely dangerous. NEMO will continue to provide regular updates on all activities taking place at La Soufriere.”