MP says gov’t now doing what it jailed people for 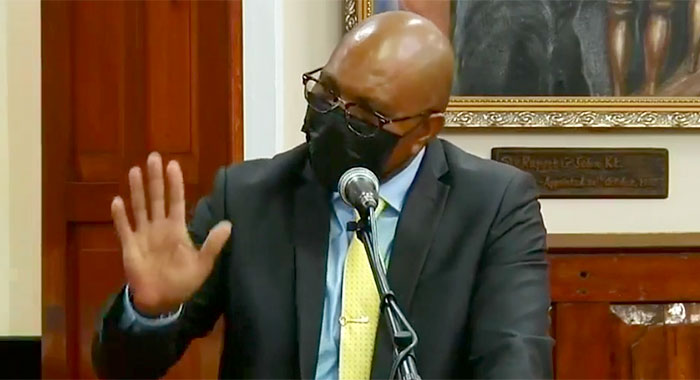 Member of Parliament for South Leeward, Nigel “Nature” Stephenson is calling on the government to free the country’s ganja prisoners and expunge their criminal record.

“If you’re really so concerned about these people, find a mechanism. Some of these persons can be pardoned. After all, they wanted the same thing that you want — gold. Whether it’s a pot or pan, they wanted money. And that is where the government is also in this industry,” Stephenson told the budget debate on Tuesday.

He said he made the case during parliamentary discussion in 2019 for the wiping of the record of persons who plant, smoke, or sell marijuana so that they could get a clean police record when seeking employment.

Stephenson said that this should be done as the state itself is now benefitting from the medical marijuana industry through the granting of licenses, and other fees.

“And I was told that there are enough rules on the books already for that. But since we are going there as a government to benefit from something that these people have sacrificed so much for, why not reach out to them?” he said.

Stephenson told Parliament he was not sure which figure to believe about the amount of money that the government has earned from the medical marijuana industry.

“Because I’ve heard in this house before that, from licenses for cannabis, I’ve heard figures between $15 and $17 million in revenue received from licenses and other fees — application fees. But in this year’s budget, I’m hearing just a little over $5 million. But you’re gonna have to work that out,” he said.

“But the point I want to make her is that $5 million would do a hell of a lot of good for our traditional farmers.”

He said that Minister of Agriculture Saboto Caesar is an integral part of this, having marketed the nation to foreign investors as an ideal place to grow medical cannabis because we have over 50 years of experience.

“Who have the over 50 years of experience? The traditional farmers,” Stephenson said.

“Those who, over the years, have had to leave the comfort of their own homes because the economics of circumstances largely were not ideal. They can’t find jobs.

“Some of them have been socially excluded and birds of a feather flock together. They find like minds and go into the hills and they plant this marijuana. Well, nowadays, people call it cannabis. But them fellas know is marijuana. So when I talk about medical cannabis, or medical marijuana; same difference.

“But the people who have kept that going for all these years making the sacrifices leaving their homes, sleeping in tents, and shanties, dodging bullets from police, jumping off a cliff like Tarzan on ropes to keep this industry going for over 50 years, those, I have been arguing, are the people who should be considered first in any legal marijuana farming.”

He said it is not that traditional farmers enjoy engaging in illegal activity.

“But they are forced to do so. They took their chances. Now the government sees an opportunity where they can make whether it’s 15 million, 16 million, or $5 million that we heard about last night. Whatever it is, they are now building an industry on the sweat, blood and tears of the traditional farmers because a lot of them died perpetuating that method of farming.”

He noted that while the government has established the medical marijuana industry in St. Vincent and the Grenadines, there are legal hurdles in the United States, even as some international agencies are considering reversing the categorisation of marijuana as a dangerous drug.

“So while we apply the wait-and-see approach to see what the court is going to say or what those big organizations are going to say, what we should be doing as the authority here in St. Vincent and the Grenadines [is] give consideration to those persons who have kept the tradition going.

“I’m asking this government — I don’t know how that works, but there are people here who know better than me — see whether or not some of those persons who have marijuana convictions can have their sentences commuted.”

The lawmaker said it is a burden on the limited resources of the government to keep prisoners in jail.

“Your government is involved in marijuana trade now. You’re setting up an industry, multimillion-dollar industry.

“Whether or not there’s a pot of gold at the end of the medical cannabis rainbow, these people sacrificed and I’m urging you to examine the records, free up some of these people who have petty marijuana offences.”

He said he was not sure that the Governor General’s ink dried on the paper that signed the cannabis industry act into law when three marijuana farmers were given sentences far more than have been handed down on some people who have killed others.

He was speaking in apparent reference to the April 17, 2019 sentencing of four men, including one of his constituents, to a combined total of 180 years in jail for possession of 2,007 pounds of marijuana on Feb. 20, 2014 with intent to supply to another as well as possession for the purpose of drug trafficking.

However, the men — Daniele Baptiste, 39, of Owia; Calvert Prince, 51, of Petit Bordel; Ezekiel Robin, 38, of Clare Valley; and Denzil Sam, 32, of Chateaubelair — will serve a combined total of 59 years, since the sentences will run concurrently.

The effect of the sentences handed down by High Court judge Justice Brian Cottle will see the men serving terms of imprisonment of 11, 15, 16, and 17 years respectively.