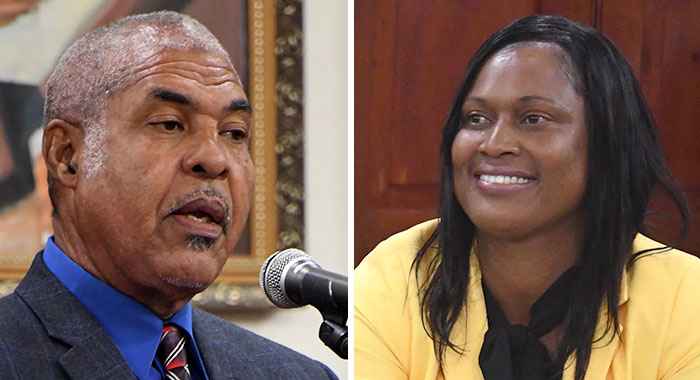 “I know that Senator John — she’s not here today — has been accepted as a senator in this honourable house and that she has come from the village of Owia,” said Daniel, who was, last November, elected to a fifth term as MP for North Windward.

“But she’s new and inexperienced and of course she would gain levels of experience. But she have (sic) already made two grave mistakes. The first one is in her first delivery, when she said that she was the first Garifuna woman to come to this parliament. But of course, there are many Garifuna women who have come to this parliament, even during my time — elected and nominated,” Daniel said.

“And secondly, is that under agenda item, ‘obituaries’ she commended and congratulated someone under ‘obituaries’. I think her leader should at least give her some levels of instructions to these matters,” said Daniel, who, one week earlier, amused social media when he said in Parliament, “What can I do? What can we do? What can us do under the circumstances?”

Daniel said that, in 1998, when he lost the election in North Windward by 58 votes, the deputy political leader of his Unity Labour Party offered him a senatorial post.

“I said, ‘I’m saying to you, that I will enter the Parliament of St. Vincent and the Grenadines when the people of North Windward so let me do.’ And in 2001, I entered into this parliament, and I’m still standing here today. I have seen many senators walk through the doors of this parliament. Sadly, many of them have disappeared.”

“Because why? They are here at the whims and fancies of their political leader. And you have to be careful. And so I’ve shared this comment before in this house and I hope that senator try and impress her leader as much as possible to be able to sustain that fresh breath of air.”

After contesting and losing the general elections, Daniel returned to his government job under the New Democratic Party administration against whom he had contested.

However, last year, John was forced to resign her teaching post, despite a 2005 agreement that Daniel’s ULP administration signed with the teachers union and on which the court had ruled in favour of the union.

After her senatorial appointment last year, John told iWitness News that she had decided to accept the appointment rather than try to get back her higher paying teaching job because “service to humanity is the best work of life, not salary”.

As a graduate teacher, John earned about EC$5,400 monthly before tax and social security deductions. However, as senator, she will earn about EC$3,500 monthly, before similar deductions.

On Tuesday, Daniel thanked constituents for re-electing him for a fifth consecutive term in office.

Daniel said he is the only Labour candidate to have been re-elected to consecutively serve in North Windward.

“That is a constituency that has been dominated by the PPP (People’s Political Party), and the NDP [, its successor]. And so, I’ve won that seat five times in a row. And there’s no doubt that if I’m asked to run again, I will win it again,” said Daniel, who is in his 60s.

“You see, the NDP brought a candidate in the last general elections and they referred to the candidate as a breath of fresh air. But before the elections, the candidate was already getting stale,” he said.